As part of disturbingfilms.com's Vampire Week 2012, which runs from July 22 - 28, I'll be reviewing 8 Vampire movies. Yes, that's right, EIGHT, this is my favourite sub-genre! There's going to be a mix of a couple of my favourite vamps films, a couple I haven't watched before and some cool movies worth checking out if you haven't already. This is the first film... 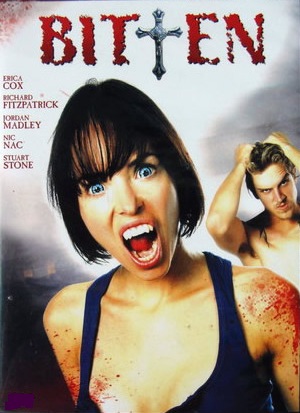 "Holy shit, you ate my ex-girlfriend! I don't know whether I call the police or buy you flowers"

Jack, a paramedic, works the graveyard shift and is lonely after his girlfriend Sherry dumped him for her yoga instructor. His work colleague, Roger, is fed up with his mood and whining when on shift together in the ambulance and suggests Jack should go out and find another girl.

On the way home after a hard nights graft, Jack sees a woman covered with blood, lying on the floor in the alley behind his apartment. She doesn't remember how she got there so Jack tries to help her but she refuses to go to the hospital. So he takes the beautiful stranger home and nurses her until she is recovered, at which point she tells him that her name is Danika.

It doesn't take long before Jack falls in love with Danika, even though she seems to be an addict suffering from withdraw symptoms. However, he soon discovers that Danika is not a drug addict at all, but that she is in fact a vampire!

Not letting the fact that she is a vampire, Jack and Danika fall in love with each other and try to find a way to feed her blood cravings while killing as little as possible. But their attempts end without success as Jack has to keep finding places to hide the ever increasing amount of dead bodies in and around his apartment.

With a fair few ups and downs Jack keeps trying his best to please Danika which is sweet but as the relation becomes more and more strained, in the end it all gets a little ugly!

Being a fan of Jay and Silent Bob (2001), it's always good to see Jason Mewes in different roles even though Jack, in this movie was kind of like a grown up version of Jay which actually worked well. You actually start to feel sorry for Jack as he continuously tries to keep Danika sweet. While the acting isn't going to win any awards, the whole cast do a decent job and with a story that's keeps you interested, it's worth watching atleast once.

Humorous with a nice touch of blood and gore this cool low budget horror movie has a different and original outlook an the Vampire genre and was enjoyable to watch.

Bitten gets a slightly above average 6/10.