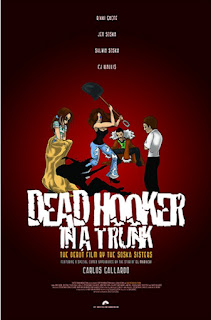 With the release of American Mary not too far away, I thought I'd better get my ass in gear and watch the Twisted Twins' debut film.

After a night out in a bar, three girls known simply as Badass, Junkie and Geek, head out to pick up Geek's friend, Goody Two Shoes.

Badass is, well, what it says on the tin, a fucking badass! She's hard as nails and impulsive, never quite on the right side of control but without ever really losing that control.
Her sister, Geek, is distant and they don't really mix well together as their personalities are at the opposite ends of the scale.
Junkie is the a chaotic rock star and good friends with Badass.
Then we have the very pleasant bible bashing, Jesus loving, weak stomached Goody Two Shoes, friend of Geek.


After being stuck in the car for a while with no real destination in mind, Badass yanks the car over as there's a rotten smell. They all get out of the car and move round to the trunk. Upon opening the trunk up, to their surprise they discover a dead body, surrounded by drugs!

Badass and Junkie got so wasted the night before, they can't remember if they had anything to do with the dead hooker or not, so in a blink of an eye, Badass decides that they should dump the body without even thinking about why, what or when, much to do disapproval of her sister.

The events that follow leads the four of them to unimaginable violence as they are being followed and attacked by various assailants. So the group has to put aside their differences to dispose of the body before they're next. Between the cops, drug dealers, a serial killer and a cowboy, it's becomes a fight for survival as they try to bury the dead hooker and possibly find out who she is and the truth behind her death.

When watching a movie that's a director / writer's first time effort, most of time you can tell and pick a shed load of faults and even think of ways to improve the movie. But with a taste of Grindhouse exploitation, the Twisted Twins, Jen & Sylvia Soska's debut feature became an instant cult classic and it's not hard to see why.

If I had to be picky, there's no Oscar winning performances here and the story has a couple of holes. But, as a whole, these two things bare no consequence on the end result. In fact, this move has flashes of genius and I couldn't help but smile as I thought to myself "What we have here is a new force to be reckoned with within the horror genre!"

I watch a lot of shit and a lot of the time it's Indie horrors that quite simply give the genre a bad name. But once in a while something comes along and stands out because of it's refreshing taste it leaves you with. This is one of those movies.

Some of the cinematography is beautifully put together and the score and soundtrack screams creativity and superiority. Parts of this film reminded me of certain scenes from other movies, like Taratino's Reservoir Dogs (1992) and Rob Zombie's The Devil's Rejects (2005).

If you like your horror in the style of exploitation and want to see something original, plus lots of blood, then I highly recommend giving this a go. I see a very bright future ahead of the Jen & Sylvia Soska and that also includes the genre as a whole where these pair are involved. Bring on American Mary! In my humble opinion, the Twisted Twins are up there with Matt Farnsworth (The Orphan Killer 2011) as the leaders of the new school in horror.