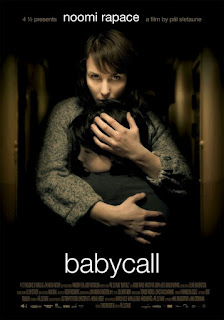 Young mother Anna moves into an apartment block with her 8 year old son. It soon becomes apparent that both mother and son are escaping the clutches of Anders' abusive father, with the help of social services. Anna is extremely neurotic, always in fear that the father will find where they live and attack Anders. So in turn she is over protective of her son, sleeping in the same bed and even to the point of waiting outside his school all day.

After social services visit her home, they tell her that Anders should sleep in his own room. To aid in the process, she buys a baby monitor from a local shop, whereupon she meets helpful sales assistant, Helge.

After hearing some unpleasant and possible violent sounds over the monitor, she goes back to the shop and asks Helge for more assistance, where he advises her that the most probable cause is interference from another monitor located in the building.

But is what's she's hearing and her thoughts and emotions so impaired by past events that contact is lost with external reality? As she starts to loose grip of reality, her relationship with her son is strained.

To normalise herself she seeks friendship from Helge, who also is troubled by the health of his mother. Anders has also found himself a friend in the form of a boy of the same age. In the meantime, frequent visits from Ole, the social worker, are becoming a bit too personal and more worries begin with news that Anders father is seeking custody. With the increase of pressure, can Anna keep a grip of her son and reality? 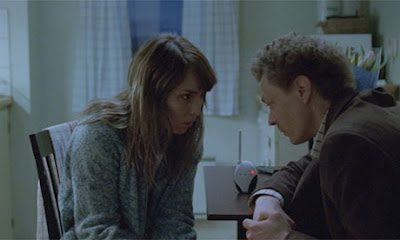 This award winning (Gérardmer Film Festival - Best Film & International Critics Award 2012) Norwegian film has the consistency of most European horrors, slow paced but with a good amount of psychological tension that keeps you wanting to know more. It keeps you guessing right up till the shock ending. Noomi Rapace (The Girl with the Dragon Tattoo, Sherlock Holmes: A Game of Shadows, Prometheus) offers a solid performance once again, making it easy to understand why Hollywood has snapped her up. The rest of the casts roles are built around Rapace's charater with a perfect amount of support. With simple direction and writing, this movie shows the mainstream film makers that a good film doesn't have to be over worked and over stretched to produce a good movie.

If you like your horror moody and thoughtful, then this is one to watch. 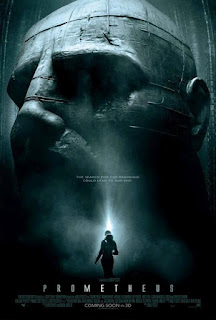 In the open scene we see a humanoid type figure (an Engineer) standing on the edge of a waterfall as he looks at a spacecraft rising away into the clouds. No clue or date is given to explain what's happening.

Cut away and it's the year 2089, Scotland (UK), where 2 archaeologists, Elizabeth Shaw and Charlie Holloway discover an ancient drawing which is connected to several other ancient drawings already found. In all the drawings, a "star map" is found, which Elizabeth believes to be an invitation to find humanity’s creators, or "Engineers".

With the help and funding of Weyland Corporation's CEO Peter Weyland, Elizabeth, Charlie, and a crew of 17 (in total) head out to find the distant moon LV-223 aboard the state of art Prometheus. It takes them 2 years to reach their destination, all while the ship's android, David, monitors their voyage and as they wake from hyper-sleep (stasis) it's now 2093.

The Prometheus lands near a large structure, which a team is set to explore, but under the instructions from mission director Meredith Vickers, who tells them to avoid making contact with the Engineers without her permission. As the team searches through the dark tunnels, they come across an Engineer and go on to discover more alien technology which is more than what they bargained for. After realising what they encounter could not only threaten the crew members but the entire existence of Earth, the fight for survival begins!

As Ridley Scott's Alien (1979) movie is one of the films that first got me into horror as a kid, I'm a massive fan of the Alien franchise. However, I couldn't help feeling underwhelmed. Don't get me wrong, the cinematography, visual effects and set production are all of the highest standard, as we have become accustomed to from director Ridley Scott over the years. It was the story that let it down. Plot holes causing too many unexplained questions and things simply not adding up when it came to the 1979 Alien movie. Yes, this is a prequel to that movie, but not in a direct sense. Rather, it was an origin story, pre-dating the xenomorph in the Alien franchise. The acting I couldn't fault, all the cast were solid but the stand out performance for me was Michael Fassbender. That said, there seemed to be little point for Charlize Theron's character, other than the small annoyance she causes to the crew. It was kind of like a poor "Burke" (Aliens 1986) roll!

If you haven't got the time or money to head out to the cinema to see this movie, then don't worry, wait for the DVD/Blu-ray. At best it was a decent Sci-Fi film and I would've rated it higher had it not had the link to such an amazing film like Alien!

Prometheus get a little disappointing 6/10
(Read on for a bit more info on the movie as regards the plot...)

Check out the trailer belolw...


I wanted to go into more detail because the movie raised certain questions. So I going to talk about things that will spoil the movie when you see it for the first time. (Nip back and have a read through this when you have, or not, it's up to you!)

In the opening scene, what's going on and what year is it?
The Engineer standing on the edge of a waterfall as he looks at a spacecraft rising away into the clouds. He then goes on to drink a dark bubbling liquid and disintegrates into the water.
Circa 500 Million BC: One of the Engineers is left on Earth, becoming the catalyst for the first life on the planet as his DNA mixes with the water.

Where does the Prometheues movie fit in with the timeline
2093 - (December), the Prometheus lands on LV-223.
2122 - (June 3 - June 6), USCSS Nostromo (Alien movie 1979) encounters what is assumed to be a distress signal emanating from the planetoid designated LV-426.
2157 - Hadley’s Hope terraforming colony established on LV-426 aka Acheron. There is no sign of any signal from the derelict investigated by the Nostromo 35 years earlier.
2179 (Circa May 16) - Shuttlecraft Narcissus is discovered by a deep salvage team, and Ellen Ripley and Mr Jones the Cat are rescued (setting the record for the longest ever hypersleep).
2179 (July 6) - Ripley reluctantly agrees to accompany Burke and a Colonial Marine squad of 2nd Battalion, 9th Regiment to Acheron to investigate on board the USS Sulaco after Colonial Administration loses contact with the colony on LV-426. No need to go any further here.

Can we as assume that the spacecraft discovered by the Nostromo in Alien (1979) and then found by terraformers in Aliens (1986) is the same ship that the Engineer attempts to escape in but crashes in the Prometheus movie?
At first, yes. BUT, either the writers of Prometheus have got the name of the moon wrong and instead of the Engineer dying in his seat of the craft he dies in is the escape shuttle of the Prometheus, or over time the moon's name has been renamed and changed from LV-223 to LV-426!

Throughout the movie, there's signs of the infamous xenomorph of the Alien franchise. In Alien (1979) an Engineer / Space Jockey is found with it's chest ripped open by a xenomorph (see picture left), as discovered by Captain Dallas, Executive Officer Kane, and Navigator Lambert who investigate a derelict spacecraft that contains the fossilised remains.

At the end of the Prometheus movie the Engineer is attacked by an organism that Elizabeth Shaw (Noomi Rapace) earlier in the movie has removed from inside her stomach. The organism then plants an embryo inside the Engineer which rapidly grows and bursts out of his stomach, revealing an early form of xenomorph.

Big plot hole? Hmm, yes! But not if the writers are planning a sequel and another engineer goes back to LV-223 and then comes into contact with the xenomorph, presuming said xenomorph is a queen and pushed out a load of eggs, then he escapes but crash lands on LV-426! But then there's a statue like formation on the wall that's looks like a queen xenomorph, in the area that the giant head and metalic cylinders are found and the Engineer that's found outside that room is carbon dated to around 2000 years old. The fluid contained in the cylinders is does not produce xenomorph directly, but rather it evolves from another organic form. Is there other samples of this used on other planets? It's certainly not mentioned in this movie.

Going back further along the timeline by bringing Predator into it, these xenomorphs already exist! -
2000 BC - A Predator hunting expedition goes awry in Northern Cambodia when the Aliens multiply out of control. The Predators wipe out all trace of the infestation.
1904 (October 10) - A occupants of a whaling station on Bouvetoya in the South Atlantic Ocean caught between in the middle of a Predator/ Alien hunt, are slaughtered. One whaler, Karl Johanssen witnesses a Predator fighting an Alien before dying of hypothermia.
1997 - A Predator comes to Los Angeles in the grip of a heat wave, wiping out a drugs gang, police officers and a carriage full of civilians on the Los Angeles Metro. Lieutenant Mike Harrigan pursues it across the city until he finds the creature cornered by Agent Keyes' special unit. The Predator wipes out the special unit and is pursued by Harrigan to its ship. Upon which we see a xenomorph skull.
2004 (October 3) - Weyland Industries satellite P12 picks up a heat bloom over Antarctica and the icebreaker Piper Maru is dispatched to investigate, where upon xenomorphs and Predators make an appearance.

So there you go. If you're a fan of the franchise, do you see my frustration with the Prometheus movie?!
Prometheus is going to need a damn good, even great sequel to justify it's self!