As part of disturbingfilms.com's Vampire Week 2012, which runs from July 22 - 28, I'll be reviewing 8 Vampire movies. Yes, that's right, EIGHT, this is my favourite sub-genre! This is the fourth film... 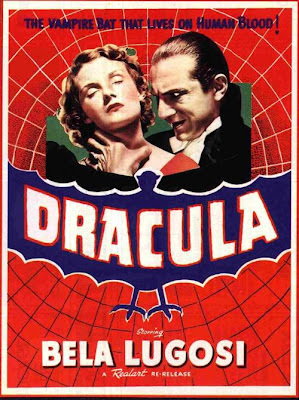 "There are far worse things awaiting man than death"

A stagecoach heads down a rocky road, among the passengers is Renfield. At the a drop off point, he reveals that he needs to stay on as he's being met by another coach at midnight further along the path, much to the horror of the locals.

He's headed to Castle Dracula to meet the count, but the a local man warns of the dangers of the night that lie in wait for him, that Count Dracula is a vampire! Undeterred by the stories he insists he carries on, but before he goes a woman gives him a cross to hang around his neck, as this well serve as protection.

Renfield is dropped off in quick fashion at the meeting point, where he is met by a silent couch driver, who merely points for him to get in the coach after taking his bags.

The stagecoach speeds along the Transylvanian mountain pass towards the castle. On arrival, Renfield exits the coach, but to his surprise and bewilderment, the driver has disappeared along with his bags. The door to the castle opens on it's own and he enters. Overwhelmed by the whole situation, he fails to notice the count coming down a the huge staircase behind him. Dracula greets him and shows him to his quarters. Renfield is there on business with the count, who is leasing Carfax Abbey back in London.

The deal is done, in mores ways than Renfield bargained for and they set sale for England aboard the Vesta with only three boxes, one containing Dracula. The ship arrives at the docks in England with the whole crew dead and only Renfield is alive to meet the dock workers, in a complete state of madness! He's removed and sent straight to a lunatic asylum overseen by Dr. John Seward.

Meanwhile Dracula manipulates his way to meeting Dr. Seward and in the process eyes up his daughter Mina and her friend Lucy. This now sets in motion Dracula's plans to feed his thirst with the help of his now loyal servant Renfield.

Dracula's vampiric identity is discovered and with the help of  Dr. Van Helsing, Dr. Seward and John Harker (Mina's fiancé), they are now in a fight to protect Mina from Dracula's evil forces and influence.


This was my first time watching the 1931 version and I have to say I'm glad I finally got round to watching it. Being such an old film, not everyone will make an effort to see it, but if you haven't, as a true horror fan it's definitely worth watching once. These movies paved the way for horror for generations to come.

This where I get a bit geeky - The first thing that caught my attention was the Transylvanian locals. They spoke Hungarian. Why did it catch my attention? Well, my roots lie in Hungary (both my parent are Hungarian) and true to fact, the boarder between Hungary and Romania ran along the Transylvanian Alps / Carpathian Mountains pre-World War 2 and the region of Transylvania was apart of Hungarian Empire (dating back to Attila the Hun), not Romania. Therefore, somewhere down the line, I must be related to Vlad the Impaler who Count Dracula was based on! LOL. Hence, a big part of my obsession with vampires.

Anyway, back to the film...
Bela Lugosi is still considered as giving the best portrayal of Dracula by most people. He certainly had a great influence on the likes of Christopher Lee and Gary Oldman. But if I'm honest, the one person that stole the show for me was Dwight Frye's Renfield! He gave a marvellously mad performance, switching from the normal Renfield to the looney bin attendee. Edward Van Sloan plays Van Helsing as a calm and controlled Dr. as opposed to what we see in the 1992 version.

The story adaption is simplified, giving more emphasis on Renfield's character than John Harker and Lucy is barely apart of the movie. One thing remained throughout, the great use of light on close ups of Dracula that accentuate his evil eyes, always reminding us of his hidden agenda.

As a vampire fan, this one of those films to watch before you die.

Check out the original trailer below...