As part of disturbingfilms.com's Vampire Week 2012, which runs from July 22 - 28, I'll be reviewing 8 Vampire movies. Yes, that's right, EIGHT, this is my favourite sub-genre! This is the sixth film... 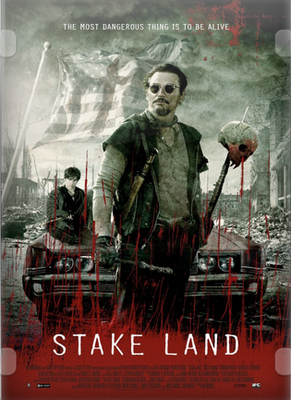 "Waiting for the messiah but he never came, death came instead and it came with teeth"

Set in a post apocalyptic USA, the country is in a state of economic and political disaster due to a vampire epidemic that has swept across what is left of the nation's abandoned towns and cities.

The story follows Martin, a teenage boy who's family is slaughtered by a single vampire. He is saved by a death dealing, lone vampire hunter simply known as Mister.

Under the protection and care of Mister, Martin is taught how to defend himself and kill vampires as they travel across the country.

Heading north to Canada, where "New Eden" awaits, the two of them fight off vampires, pick up more people looking for safety and have trouble with a group of religious extremists known as The Brotherhood.

The vamps aren't the typical bloodsuckers we see in most movies. Rather, they are non thinking, non talking, almost zombie like, ravenous creatures acting in blind blood lust, directed only by their animalistic instincts. The movie very much has the feel of Zombieland (2009), but the big difference, besides the vampires, is the very harrowing story.

The film has it's jumpy parts and disturbing moments. In the first scene we see a vamp feeding on a baby and when I told my wife I was watching the film again, that was the first thing she mentioned as it still creeps her out to this day!

Nick Damici plays the hardened badaas hunter, Mister, in typical fashion - very few words but what he says is worth listening to and when he kicks ass he kicks it permanently. Connor Paolo's performance as Martin is a coming of age story in it's own right. He also narrates during the movie.

And with the "Scream Queen" Danielle Harris, Kelly McGillis and Sean Nelson rounding up the main supporting cast, you get attached and involved with each roll, which is testament to the solid writing and directing. Michael Cerveris as the nut job cult leader Jebedia, gives us another enemy within the film, providing more than just the vampires to fear.


The film is actually one of my top horror movies of 2011 and with a good mix of drama, action and blood, I highly recommend watching it.