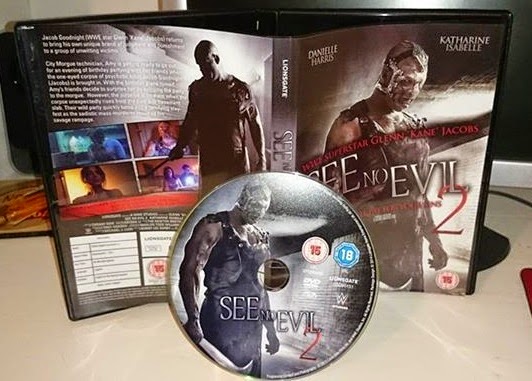 When the announcement came in over the Internet that See No Evil 2 would be going into production there  were two reasons why I was very interested in seeing how this project progressed and seeing the finished product. You all should know by now that I'm a huge fan and supporter of The Twisted Twins, Jen and Sylvia Soska, so naturally when they got the directing gig I was excited. When Danielle Harris and Katharine Isabelle were added to cast that excitement become somewhat of a school boy joy (that only men can understand!). Of course, Glenn Jacobs ("Kane" WWE Superstar) reprised his role as the killing machine Jacob Goodnight.

I pre-ordered the DVD as it's only available on that format for the UK/European market. The Bluray available is region A. Anyway, expecting it on it's release date, Monday 20th October (tomorrow), it arrived this afternoon (along with Slipknot's latest album which is released tomorrow also)! I love Amazon! You'll find links below as to where you can get your hands on them. Needless to say, I whacked it straight in the player to watch it.

The open credits are cool and are made even more so with a quick cameo from the twins so keep your eye out for that. The set up, Jacob Goodnight and his victims are being transported to the local morgue so the sequel follows directly on from the first film. While they're in transit we're introduced to the staff at the morgue. Our leading lady Danielle Harris plays the role of Amy who's about to finish work. Seth (Kaj-Erik Eriksen) and wheelchair bound Holden (Michael Eklund) are on the graveyard shift. But with all the dead bodies that are about to arrive, Amy decides to stay and help out despite the fact that it's her birthday and she has her friends to meet.

Enter Amy's best friend Tamara played by the amazing Katharine Isabelle (who pretty much steals the show for nearly half the movie), Amy's brother Will (Greyston Holt), Kayla (Chelan Simmons) and Carter (Lee Majdoub). They bring the birthday party to Amy as she's gotta work late, and this is where the fun begins. This fun is provided by Tamara who's a little drunk and a lot hot!


Besides the fact that both Isabelle and Harris are two of my favourite modern day Scream Queens and yes they're both fucking hot as hell, Isabelle has been great in her previous films, namely Ginger Snaps and American Mary (written and directed by Jen and Sylvia), so I always look forward to seeing her perform. Now Harris, for me, has been up and down with her performances throughout her career. My theory is that she responds to strong directors and delivers better performances through those certain directors. I thought her best work came by way of both Rob Zombie's Halloween films.

Being a big fan of the twins' work and being that I felt Isabelle gave her best with the fantastic execution of Mary Mason in American Mary, I was looking forward to how Harris responded to Jen and Sylvia's guidance. I'd like to say I was surprised, but deep down I knew that Danielle Harris would delivery. Yes, she definitely benefited from working with the Soskas and they brought the best out of her with Harris giving her best acting to date. She provided a very solid foundation for the movie being the lead.

Back to the fun and the birthday party in the morgue. Actually, that sounds like a cool idea for my birthday next year, but I digress. Things get a little heated between Amy and her Brother, Tamara is getting frisky with Goodnight's dead body as well as her boyfriend's. One thing leads to another, while Tamara and Carter go at it on a table next to the killer's body, Mr Goodnight comes back to life and the slashing, stabbing, murdering violence begins!

My main concern or negative point I picked up on was that the first third of the film was a little week and this was down to the writing by Nathan Brookes and Bobby Lee Darby. It was a little predictable. I couldn't help but think that this would've been a near perfect slasher flick if Jen and Sylvia Soska wrote the script too, but as the movie progressed it got better. In fact, the last third did make up for the beginning and finished very strong with a couple of surprises.

The acting was solid throughout by the supporting cast and the standout performance came from Danielle Harris followed closely by Katharine Isabelle. Glenn Jacobs gave a good performance as Goodnight and out did himself from the previous film. He's also developed a serious disliking of doors which I found amusing. We do get a few flashbacks from this film's predecessor just to remind us of what Jacob went through.

The SFX are a good mix of practical FX which are complemented by only a small use of CGI. The score is cool and gives good support to the more tense scenes. But the best thing about this movie is the direction. Jen and Sylvia bring to life what should now be a serious contender in villain category. I feel that if another sequel is made, Jacob Goodnight will concrete his position as a horror killer icon. Again, it's the Soska's vision and work ethic that bring the best out of every performance, scene and even the script which makes See No Evil 2 is great and enjoyable watch which far surpasses the first film.

The special features on the DVD include:

TWISTED TWINS
This gives us a nice little insight into the lives and work ethic of the twins and the positive affect they have on those they work with. Plus there's some really cool photos of Jen and Sylvia from their younger days.

DISSECTING THE KILLS
An in depth look at some of the kill scenes and SFX.

KANE'S GOODNIGHT: AN ICON REBORN
Interview with Glenn "Kane" Jacobs and his experience as the killer.


SEE NO EVIL 2 IS BLOODY GOOD FUN WITH SOME GREAT MEMORABLE SCENES. JACOB GOODNIGHT IS OFFICIALLY BACK & THE TWISTED TWINS DELIVERY ONCE AGAIN!

The film is already available on VOD. Check out the trailer Below and the links to order a copy... 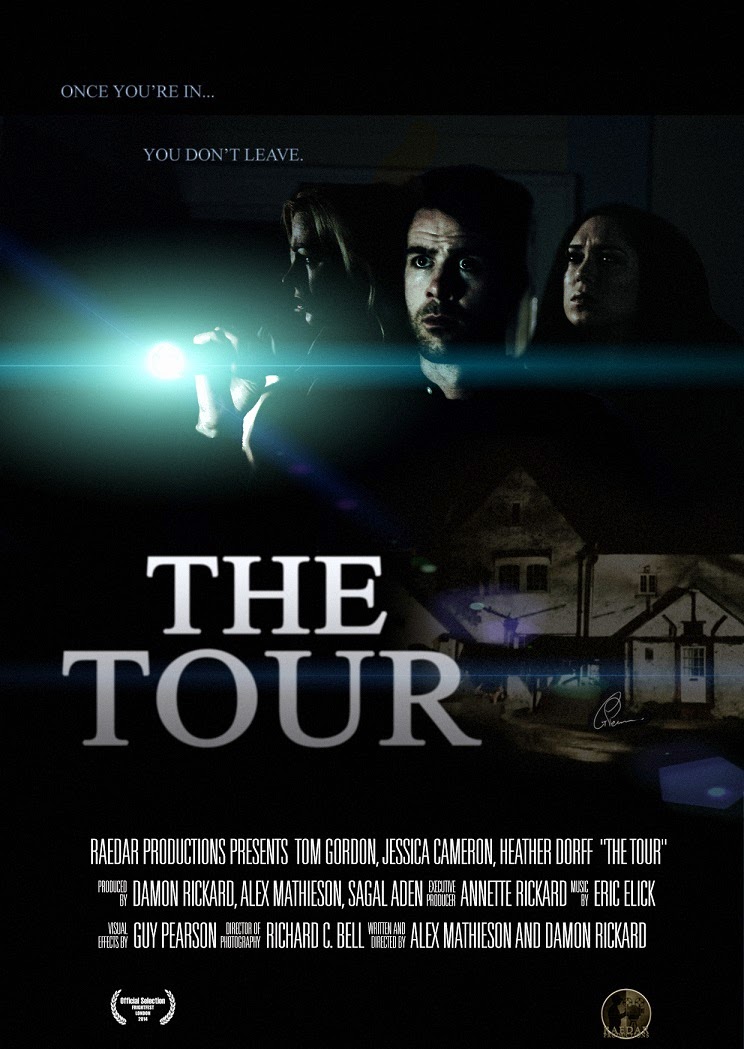 This short horror film has been doing the rounds at this year's festivals. Written, directed, edited and produced by both Alex Mathieson and Damon Rickard, The Tour stars Scream Queens Jessica Cameron and Heather Dorff as a couple of tourists who are checking out the sites around England.

The setting for the film is Darkmoor Manor, a creepy house with a history steeped in haunted legend. The house is closed to the public, but Morgan (Cameron) and Cassie (Dorff) get friendly with the tour guide, Tom (Tom Gordon), who gets them into the house later that night.

This is where the fun and games begin, but just when you think it's going to get predictable, a nice twist hits. The twist doesn't strike till after the girls realise that Tom and the house aren't what they thought they would be.

We're treated to a ear shattering scream from Jessica Cameron and some simple yet effective FX and story telling. This is the first outing into film making for Mathieson and Rickard and they should be proud of what they have made here. The creepy feel and atmosphere make for a very enjoyable watch.