As part of disturbingfilms.com's Vampire Week 2012, which runs from July 22 - 28, I'll be reviewing 8 Vampire movies. Yes, that's right, EIGHT, this is my favourite sub-genre! This is the fifth film... 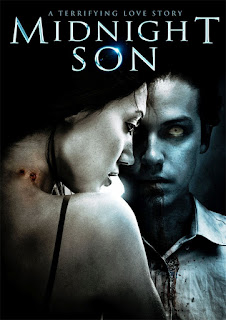 "They say the human body stops growing at age 25.....You're in the last stages of something"

24 year old Jacob is a security guard working the night shift, just trying to survive like anyone else. He works the night shift for a good reason as he has a skin disorder which burns his skin when in direct sun light and has suffered with this since a child.

As the days and nights go by Jacob can't seem to contain his hunger, pretty much eating every and any crap he has in the fridge and still feeling empty. After passing out at work he pays his doctor a visit, who tells Jacob that he's got all the symptoms of malnutrition even though he eats as much as he does.

In an attempt to quench the hunger he moves onto red meat, fryed with a side of the bloody juice left over in the packaging!

Realising that this gives him a bit of an extra kick, he visits a butcher shop and orders a pot of blood. Gulping down the blood he's finally feeling a little better.

In the mean time he befriends Mary, who works at a local night spot and has a bit of a coke problem. As their relationship moves forward, Jacob's need for blood gets stronger and signs of his change become more frequent and a detective visits Jacob at work asking for info on a woman that's been murdered near the building he works in.

In an attempt to find a stronger source of blood he checks the local hospital's bio hazard waste bins for left overs. He gets caught by a hospital employee, Marcus, who in return tells Jacob he can get what he needs for him. Jacob starts having flash backs that lead him to believe that he's involved with the murder and Marcus steps up with some extreme ways of getting hold of some blood.

Days and nights start to blur past, Jacob's world is turned inside out as his thirst and transformation becomes more significant and he gets deeper involved with Marcus which can only lead to no good. All this is effecting the relationship with Mary. Can he control everything that's happening around him, get the girl and get his bloodfull urges in check before it destroys him and everyone around him?!


After having it's premiere at the Cinequest Film Festival (March 2011) in San Jose (California), Midnight Son got a FEARnet VOD release in January 2012. Was it worth the wait? Yes, it was. This is a very slick and moody piece that is written and directed superbly. Smart, intense, and unpredictable throughout, the small cast delivers a rock solid performance in between the blood, the plot twists and a score, that all keeps you on edge.

In a sub-genre that's been polluted by the likes of Twilight and it's horde of "teenie boppers," this vampire film is refreshing and something worth watching, that genuine horror fans will enjoy! If you haven't seen it yet, you can sink your teeth into the DVD as it was released on July 17th.