With just under a month to go until its 15th edition, Mayhem Film Festival have just revealed the line-up for their Short Film Showcase, which will screen on the Saturday of the festival.

This year’s line-up include the following films (in alphabetical order):

This year’s Short Film Showcase is made possible with the support of MIYU Distribution.

Mayhem Film Festival originally started as a single collection of short films before growing into the four-day weekend it is now, and so its Short Film Showcase remains at the heart of the festival with its traditional Saturday slot, and one of the most popular and beloved events of the programme each year.

Mayhem Film Festival is proud to announce the full line-up for its 2019 edition, which will take place at Broadway Cinema, Nottingham on 10-13 October. The festival showcases the best features and short films in horror, sci-fi and cult cinema, through premieres, previews, and special events each year.

Mayhem is delighted to open this year’s festival with hilarious horror comedy Extra Ordinary on Thursday 10 October. A small-town driving instructor with supernatural abilities tries to get through life without communicating with the dead - but the spirits have other ideas. Also screening on Thursday is the brain-twisting Daniel Isn’t Real, in which a deeply troubled student summons his childhood “imaginary” friend but his grip on reality slips as the malignant alter ego unleashes a vicious, evil side.

From the producers of hallucinatory fever dream Mandy (a sell-out at Mayhem 2018) comes the most sought-after – and similarly psychedelic - genre film of the year, Richard Stanley’s Color Out of Space, screening at this year’s festival on Friday 11 October. This eerie H.P. Lovecraft adaptation sees a meteor fall to earth and onto the property of a New England family — its increasingly unhinged patriarch played by the one-and-only Nicolas Cage — with insidious and delirious results. It’s a double-helping of Cage this year as his 1989 cult black comedy Vampire’s Kiss takes the coveted Saturday late-night slot - it’s Nic Cage at his full-powered, cockroach-eating, and utterly insane best.

The 15th edition of Mayhem will play host to three UK Premieres, with exclusive first screenings of high-octane serial killer thriller The Gangster, The Cop, The Devil, Polish historical drama Sword of God (The Mute), and outrageous survival horror The Pool – all previously announced.

Taking a look back into the archives, Mayhem is pleased to present a rare screening of 1967 Russian folk horror Viy, and 1987’s cult sci-fi favourite The Hidden, featuring a standout performance from Twin Peaks’ Kyle MacLachlan as an alien-hunting FBI agent.

Mayhem 2019’s final day will begin with the unclassifiable Bullets of Justice. Having created human-pig hybrid super soldiers, mankind now finds itself dominated by these “Muzzles” who farm and eat human beings – a truly “what did I just watch?” experience to start off your Sunday morning.

Mayhem’s ever-popular Short Film Showcase and the fiendish film quiz, The Flinterrogation - hosted by author David Flint - both return to round off this year’s line-up.

Early Bird passes will remain on sale at the discounted price of £70 until Sunday 8 September 2019. Individual tickets and full festival passes – at the standard price of £80 – will go on sale at 10AM on Monday 9 September. We will also be introducing a new ‘Frankenstein Ticket Package’ for this year’s festival – piece together your choice of five films over the weekend for just £30. For more information, please visit www.mayhemfilmfestival.com

The full line-up and schedule for Mayhem 2019 is available below:

6PM GIRL ON THE THIRD FLOOR

8PM COLOR OUT OF SPACE

Hello one and all! It's been a while since my last post, I know I know. Me and the Mrs haven't even done a YouTube video this year! Life seems to get in the way of our hobbies. But this post is somewhat personal to me as Leicester Horror Con is a local event and we always try to support them. Our tickets are bought. We're taking our boys. We're looking forward to it!

With just over two weeks to go to the convention, I got the change to ask organiser Nathan Leverton a few questions...

What's your background with the horror genre?

As a kid who grew up in the 80s I'd love to say I was a fan then, but to be honest I was deathly afraid of horror films when I was young. It wasn't until I was approaching my teens that I got in to horror and cult cinema. A friend and I used to hit up all the local corner shops that rented videos trying to find "Video Nasties," mondo films or anything weird and wonderful as we were at that stage where you're trying to push boundaries and be shocked. The biggest influences on my tastes however were seeing The Curse of Frankenstein (1958) on TV and Dario Argento's Profondo Rosso (1957), which I borrowed on VHS from my brother. To this day gothic horror and Giallo are two of my favourite sub-genres. 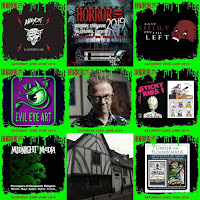 What made you decide to put the event on?

I've always been a pop culture fan and as such been going to comic book and movie conventions for over 10 years. Wanting to do something along those lines myself I ran Leicester's first comic con in 2014 but didn't continue it as I was focused on my businesses and other projects. On a trip to LA I attended Son of Monsterpalooza convention and had a great time, seeing that event that made me want to do something in the horror genre and get back in to these types of shows, so I walked in to The Guildhall and booked it then started organising this show!

With the choice of Horror Cons we have here now, what separates Leicester Horror Con from the others?

The pop culture convention scene as a whole has changed dramatically. Many smaller shows with a lot of character have been squeezed out by the huge brands. And the arms race of trying to out do each other with bigger guests has led to cons becoming a numbers game funnelling in as many people as possible. What I always liked about the best events was the atmosphere, character of a con, meeting people into the same things, talking to traders and buying directly from the people who made the products. Some events have kept true to that even as they grew, like the comic con Thought Bubble, which is a brilliant event respected by creators and fans alike. I hope a smaller fan event like Leicester Horror Con can to some degree give that to people, a unique event with a friendly atmosphere. I've said I want this to be "a chance to meet people and celebrate the genre we love," which kinda sums it up. 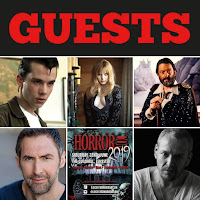 Hopefully the con will be successful, I'm personally looking forward to it, being a "local." Will you make it an annual event?

I think it'll be a fun event, with mostly local people there, so I think you'll know a lot! Excited to bring something different to the city. If it's well supported there's a good chance I'll bring it back next year. There's been a huge amount of interest asking for stalls so I know the traders want it and we've been talking about the event with the assumption it'll return. 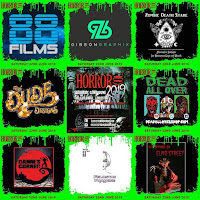 The price of the con is excellent. Especially considering there isn't a great deal to do at the other horror cons other than spend more money once you've paid for entry. The fans seem to enjoy meeting up with friends etc. Is this something you've taken into consideration when organising the event, maybe concentrating on something more for the fans than expensive guest?

There are a lot of reasons for the low price. Primarily we want the traders and guests to do well, so leaving money in the attendees pockets makes sense. But we also understand as a debut event people may take some convincing to try it out. Tickets are selling well and we aren't far off selling out so it must be working. 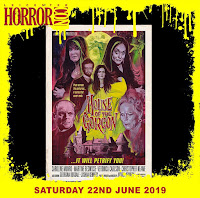 I would like to say thank you to Nathan for answering my questions and I look forward to meeting him, if he's not too busy!

Leicester Horror Con takes place Saturday June 22nd at Leicester's Guildhall, so not long now to get your tickets booked! For more info about the Con, guest line up, stalls and what's happening throughout the day, hit up Facebook or CLICK HERE. You can also order your tickets by CLICKING HERE.

So who's going? I already know a few friends that are. This is perfect event for my fellow horror fans to show there support by attending. I look forward to seeing you all there!