As part of disturbingfilms.com's Vampire Week 2012, which runs from July 22 - 28, I'll be reviewing 8 Vampire movies. Yes, that's right, EIGHT, this is my favourite sub-genre! This is the third film... 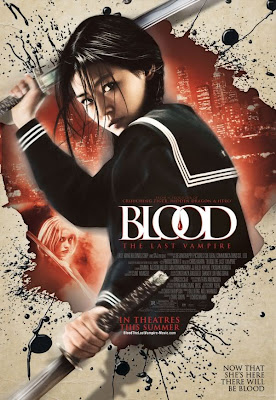 The story goes...
"In the 16th century, the savage Onin war reduced Japan to a massive feeding ground. Assuming human forms, Demons settled in amongst mortals to prey on the bloodshed.

A fearless samurai named Kiyomasa rose from the heart of evil and became the most revered demon hunter, only to be brutally slain by the oldest, vilest of all demons: Onigen.

Centuries past. Darkness reigns on. Then, a mysterious hunter emerged, joining forces with a shadow society known as the council, she sets out to face her ultimate foe...
ONIGEN."

Our heroine, Saya, is on a train. Not alone in the carriage, she eyes a nervous looking man reading a newspaper.

As the lights begin to flash, the man stands up and heads away from Saya so she starts chasing the man down the carriage. She soon catches him up, draws a katana and slices the man in half as easy as a hot knife through butter. The train stops at an underground station, as Saya steps off she is met by federal agents and a clean up crew. Mission complete!

It's the early '70s, Tokyo Japan, Agent Michael Harrison works for the Council, an unofficial shadow company within the CIA. He looks after Saya, as she works loosely with the organisation, providing her with blood as she is half human-half vampire. Older than all the Council put together, Saya is a highly skilled vampire hunting samurai with one objective in mind, finding Onigen, and exacting her revenge on the oldest of all vampires. Along the way Saya works with Council tracking and killing other vampires.

Her next mission to pose as a student in a school on an American army base in Tokyo. Alice, a fellow student and daughter of General McKee, gets caught in the cross fire. In an attempt to cover the situation, Luke, another Council member, goes a step too far which leaves Saya and Alice to fend for themselves. After chasing a vampire to the country side, Saya realises she's closer to finding Onigen. But can she complete her quest and protect her friend Alice without any more innocent bloodshed?


The movie is an adaption of the anime Manga film from 2000. Although set in Japan, it's an English dialog film apart from one scene. It takes it's influence from traditional Japanese / Chinese martial arts films, with a lot of wire work and well choreographed fight scenes. Jun Ji-hyun plays the lead extremely well and shows off her excellent sword skills. Without the vampire story, this could be an amazing samurai movie in it's own rights.

There's lots of blood splatter, although it's CGI, it looks great along side the sword action. The special effects and make up work are solid. The action scenes are second to none. Saying that, there is a scene that is very similar to one in Underworld: Evolution (2006)!

This is a high octane action horror from start to finish with some stunning visual effects that will keep you glued to the scene. Both horror and martial arts fans alike will enjoy this film!