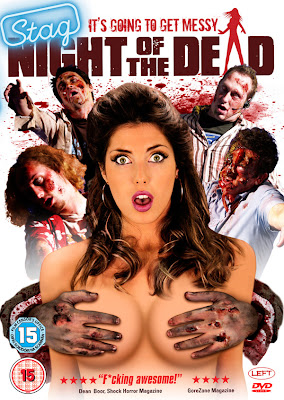 
As a mysterious plague sweeps the nation, the government seeks to contain the pandemic. Holding the Zombie creatures in one place, where they're put to good use.

It's Dean's stag do, although he's got things to organise and pick up before the big wedding, his friends have other ideas. The shenanigans get underway at a local pub with a stripper, but soon move on to a surprise location for most of the lads.

Thinking that the activity is merely paintball, they enter an airbase that's under the watch of armed guards. After a briefing from Mr. Big and Mr. Ree, the lads find out that this is no normal paintball facility. Rather this is Zomball, with real zombies!


Each armed with a P90 submachine gun that's been modified to discharge electricity, much like a stun gun but a hell of a lot more lethal, all the lads get in the mood for a fun afternoon of shooting zombies.

Out in the designated area the stags get to work taking down a horde of undead. In between games, they have a break while the guns are put on charge. But as boys will be boys, one of them strolls off to a restricted area and sets off a chain of events that put them all in danger.

The boys, with the stripper in tow, are now having to deal with more than they can handle, all while the man behind the operation, Mr. Ree, sits in the safety of his office and watches the events unfold on the screens in front of him.

With the threat of being turned into a zombie or worse, certain feelings come out and secrets are exposed which divides the group of friends. Will Dean make it to the wedding? Will there still be a wedding if he does get out alive? With what started out as a laugh, the situation gets completely out of control, and now the day have become a stag night from hell!


The first thing I'll point out, this is a low budget zombie comedy B movie from the UK. It's nothing more than a bit of harmless fun or "popcorn horror".

The SFX are pretty standard with a good amount of blood and gore that would keep most gore whores happy. But what stood out for me was the story. The normal idea of paintball taken to another level with the use of live bait, or in this case the undead, and instead of boring old paint, we have a high dosage of electricity. The perfect stag do for zombie fans!

The acting is never gonna be award winning, but most the cast still delivered the script well enough to make it more than bearable. The character development was good. Each person had a real enough back story and a believable personality, such as, there's always the idiot of the group, the level headed one, the womaniser, the not quite right in the head friend, etc. plus the eye candy.

The humour is typical of the average English bloke. Whether this passes over to countries outside the UK, but I've had a group of mates not too dissimilar from those in the film so I found it easy to relate to, which always helps.

With a few twists, turns and surprises, the movie actually kept me entertained and there was a running joke through the movie that made me chuckle every time it was mentioned. It ended quite perfectly too. That said, not everyone will feel the same as me. Remember this though, there's a lot of low budget horror films out there that try to be serious and fail miserably. OK, so it's no Doghouse (2009), but if you approach it as being a break from all the serious stuff and want a laugh, with a touch of internal organs, then it's worth giving a go.

I think Neil Jones did a decent job with his debut feature, especially the writing. I say give him a bigger budget and bigger named actors and let's see what he can do!

If just for the effort alone, Stag Night of the Dead gets 6/10 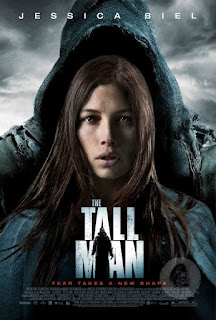 In a small ex-mining town in Washington, there's a deep and on going problem. The town's children have been going missing for a number of years. The locals believe the children are being abducting my a mysterious entity only known as The Tall Man.

Julia Dunning, a nurse and widow, who's husband was the town's doctor, helps out with the town folk when needed. She also plays second mum to a young girl called Jenny.

Besides her life as a nurse, Julia has a son, David, and a nanny, Christine, waiting for her at home. After dinner together, David is put to bed and the two girls have a cheeky drink.

After heading up stairs to her bedroom a little drunk, Julia is soon disturbed by the radio down stairs, as it's turned on really loud. Headed to see what's going on, Julia realises that David is being abducted.

She is now in a chase to save David from what appears to be The Tall Man. She attempts to hang onto the back of the van David is being taken away in, but falls off. As the van stops, she tries to fight back against the dark figure but ends up in the back off the van. She's tied up, but manages to free herself and once again attacks the antagonist, which causes the van to turn over. The enigmatic character escapes with the boy, leaving Julia for dead.

The events that follow leaves Julia in a position of compromise as the town folk seem to have a hidden agenda. Now Lt. Dodd is on the case, but will he get to the bottom of all the mystery surrounding The Tall Man and the missing children?


Let's get this out of the way - The Tall Man has noting to do with the character and main antagonist of the Phantasm series of horror films. Now, back to this Tall Man...

The first thing that stands out about this movie is the cast. Of course we have the leading lady, Jessica Biel (The Texas Chainsaw Massacre, Blade: Trinity), Jodelle Ferland (Silent Hill, Case 39), Stephen McHattie (300, Pontypool), William B. Davis (The X Files) and Samantha Ferris (Supernatural). They're brought together perfectly by Martyrs (2008) director Pascal Laugier.

As it turned out, the film really surprised me. Don't be fooled by the simple notion that this is a "boogeyman taking kids in the night" kind of movie. It's far from it. It delivers a major twist just under an hour in, one that was a little predictable, but only right at that point. Yet again it takes another turn towards the end of the movie. One that you can see coming, but again, the script delivers it that well, you still feels like you didn't really know.

From the acting to the direction to the script, my attention was kept throughout. And with it's some what controversial message, it leaves you thinking about the content of movie and how it has real world meaning. Even though this is only a horror thriller and the scares are limited, it's easy to connect to the characters and get more involved with the story, making it a film worth watching for horror and non-horror fans a like.