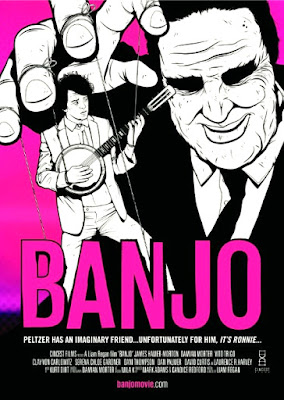 This year's trip to Film4 FrightFest, once again, revolved around one film for me. British Indie Horror Comedy BANJO, which made it's world premier today.

I always try my best to support indie horror, especially if it's British. Having known the director, Liam Regan, for a while on Facbook now and then meeting him at HorrorConUK earlier this year, (where the trailer screened and a Q&A was held with the some of the cast and crew), I was a little nervous as to what the film was going to turn out like. As some of the regular readers know, I can be brutally honest when I want or need to be.

A couple of minutes into the film and those nerves disappeared and by the end of it, it exceeded my expectations.

Banjo follows the story of Peltzer Arbuckle (James Hamer-Morton). As a mild mannered and meek individual, Peltzer gets it in the neck from all sides of life.

A bitch of a girlfriend, Deetz (Dani Thompson), a complete arsehole of a boss, Mr. Sawyer (Vito Trigo), and everyone else he works with seem to do nothing more than take the piss out of him!

The only person that's nice to him is Clyde (Laurence R. Harvey) and his ex-girlfriend Melissa (Serena Chloe Gardner). Although, she now has a new boyfriend, company big shot Stiles Rembrandt (Clay von Carlowitz) who's pretty much as bad as Mr. Sawyer.

With constant belittlement and physical abuse from Deetz, which is more than enough for you to feel sorry for Peltzer's character, and verbal abuse from his boss, Peltzer's confidence spirals down and down. During sex one evening with the his girlfriend, things get a little too vigorous and Deetz more or less ends up raping Peltzer, which leads to his "banjo string" snapping (if you're unfamiliar with that term, then I suggest you google it)!!

As it happens, it's not the only thing to snap. His mind snaps too and sees a childhood imaginary friend make a reappearance. With all the abuse and stress in Peltzer's life, his mind has finally had enough and now it's time for his old pal Ronnie (Damian Morter) to mix things up a bit and give Peltzer a little push in the right direction. Bloody mayhem ensues! 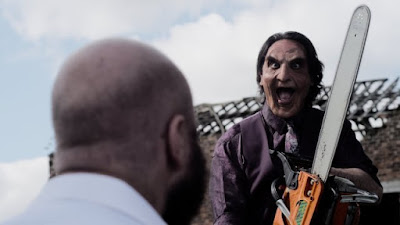 There's no surprises after watching this film where Liam Regan's influences came from. I would describe Banjo as a love letter to Troma. With over the top characters and gore, the film is absolutely hilarious. This is testament to an excellent script (that Regan also wrote) and great comedy timing from the cast.

The film is also very dark in places. Hamer-Morton's Peltzer, goes through, which can only be described as, domestic violence at the hands of his girlfriend. You can't help but have empathy for Clyde as he's asulted in the workplace. And at certain points, Ronnie's face is one of pure terror.

Dani Thompson played the bitchy eye candy character Deetz well, despite the performance being a little weak compared to the rest of the main cast. Of course, Laurence R. Harvey is perfect in his role as the feeble mama's boy. The leading man, James Hamer-Morton, gives a solid performance, keeping the audience feeling sorry for him and at the same time rooting for him. Vito Trigo plays the perfect over the top bastard of a boss. Clay von Carlowitz' suave yet cuntish Stiles was on point and Serena Chloe Gardner played the nice girl to a tee. But the stand out performance for me was the imaginary friend Ronnie. Played by Damian Morter (who was also director of photography on the movie), he gave a fantastic performance being both dark and sadistic and as funny as a stand up comedian. It was also great to see Mr. Troma himself, Lloyd Kaufman, make an appearance.

Regan's direction, baring in mind that this film is his feature length debut (based on his own short film), was exceptional. The timing of gore, brutality and laughs were so good that it looked like he'd been doing this years. This is what happens when a lover of horror makes a horror movie. You can see the passion practically jumping out of the screen. My only issue was the pacing at the beginning of the third act, but that was soon overcome with the sick hilarity that followed. That sick hilarity, throughout the film, is what made the movie so damn good and if the movie didn't have such big laughs throughout, I think it would've been a very different film that just wouldn't have worked. The FX, all practical, suited the feel of the film being dirty and grimy and had me squirming a couple of times. Over the top of all the fun and blood was a very playful score which was in perfect unison with every scene.


Banjo is a "no budget" horror flick and goes to show, when done right, you don't need big budgets to make a clever and entertaining film. Banjo is Indie horror done right and there's a hell of a lot of film makers out there that can learn a lot from this movie.

Overall... OK, it's not a perfect film, but that didn't stop me enjoying it any less than what I did nor did any issues I had with it. I'm giving Banjo the amount of stars I am, taking into account the first time effort in directing, the limited experience of the cast, and the budget of the flick. As I said before, it exceeded my expectations and I haven't laughed this hard for a long time, not even at an actual comedy! The more I think about, I absolutely fucking loved it! And I honestly can't put it any better than that. I can't wait for it to hit DVD.


BANJO WILL MAKE YOU SQUIRM, LAUGH AND MAYBE EVEN CRY! A BRITISH INDIE HORROR COMEDY AT ITS BEST