As part of disturbingfilms.com's Vampire Week 2012, which runs from July 22 - 28, I'll be reviewing 8 Vampire movies. Yes, that's right, EIGHT, this is my favourite sub-genre! This is the eighth film... 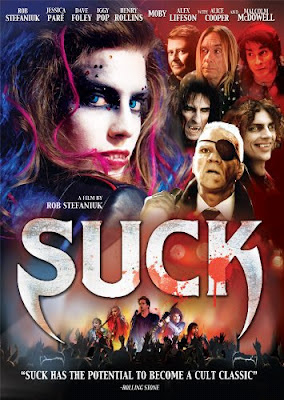 "Let me tell you what I've learnt on my many many travels. Always use a condom and never trust a god damn vampire"

Joey is the lead singer of a band called The Winners. A struggling rock band that's on the road through Canada and the USA with barely a hope for success or fame. The band's manager Jeff doesn't make matters any better due the fact he's completely useless!

At a gig in the Montreal club, the band's performance is watched by a very creepy and scary looking dude. When their set is over, the band's bassist, Jennifer, gets friendly with the scary dude and the bartender tries to give Joey some words of wisdom.

With all the gear packed in the back of the hearse they drive, they're ready to get some sleep, but Jennifer decides to stay out with the scary dude, which doesn't sit well with Joey.

The next evening, the band members, Joey, Tyler, Sam and the roadie Hugo are setting up without any sign of Jennifer. Just as they're about to start the performance without her, she turns up, ready to play, but with something very different about her.

It doesn't take long for the rest of the band to realise that Jennifer is now a vampire, obviously turned by the scary dude from the Montreal club. Hugo knew first though as he's been helping to hide the bodies that Jennifer has drained of blood.

The band's success starts to pick up due to Jennifer's newly found powers and after they stop to cut a new single, they start getting more recognition with the single being played on the radio. So eventually, one by one, the boys all get turned by Jennifer. All except poor old Hugo, as he's still on clean up duty!

While all this is going on, Eddie Van Helsig is hot on their trail, a vampire hunter with a plan for revenge. He's after the scary dude, Queeny, who turned Jennifer. So to get to him, Eddie tracks the band's movements across America. The band become bigger than they imagined, but is the price of success worth all the blood and dead bodies in the end? Doubts start to creep in and as Eddie Van Helsig catches up with them he offers a way out, but only with their help.

Rob Stefaniuk manages to make the whole thing work, writing, directing and playing the part of Joey Winner. Jessica Paré plays the two sides of her character well, the plain normal Jennifer and then the beautifully mesmerising vampire Jennifer with a psychotic twist. The legendary Malcolm McDowell's (A Clockwork Orange (1971), Halloween (2007)) character gives the obvious nod to Bram Stoker's Professor Abraham Van Helsing, along Chris Ratz' Hugo which gives reference to Renfield (Dracula's lunatic slave). It even has edited footage of McDowell from O Lucky Man! (1973) in a flashback scene.

In fact, the whole movie is filled with little moments making reference to other movies and musicians. For example: A shot of the band crossing the street is an homage to The Beatles "Abbey Road." Another shot of the band using a Union Jack flag as a blanket is based on The Who's "The Kids Are Alright." In the border station, the first shot is a nod to Bruce Springsteen's "Born In The USA" and Suck's Rockin' Roger is a take-off of Gremlins' Rockin' Ricky Rialto.

This rock and roll vampire comedy has some cool cameos from some big names, such as Alice Cooper, Iggy Pop, Moby, Henry Rollins and even Alice Cooper's daughter, Calico Cooper. Then there's Dimitri Coats (Queeny), lead singer of Burning Brides, who have toured with the likes of The White Stripes, Queens of the Stone Age, Mastodon, Audioslave and Marilyn Manson.

The movie is all round good fun with some old ideas given a frash original twist. It has a pretty damn cool soundtrack and lots of blood splashing around to keep you entertained throughout. A must watch for fans of the genre.

Check out this director's cut trailer below, that doubles as the Burning Brides 'Flesh And Bone' music video...