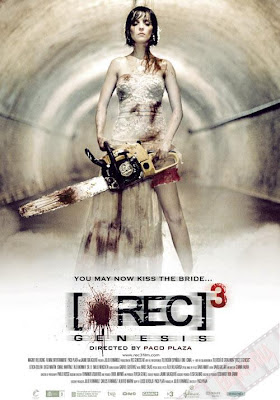 It's a bright sunny day for Clara and Koldo's wedding. Koldo's cousin Adrián is recording the event on his video camera. After the ceremony he's outside the church talking to guests and comes across his uncle, who's not at his best, as he got bit by a dog earlier that morning at a veterinary centre. Undeterred by the wound on his hand, the uncle and everybody else head to the reception where the party begins.

As Adrián moves around the hussle and bussle of the mingling guests, he bumps into Atún, who's the professional camera man hired to record the spacial day. Atún recruits Adrián in helping capture every that's going on during the wedding reception.

After the speeches, the happy couple finally get a moment alone and Clara tries to tell her new husband something, but Koldo is pulled away as the entertainment is in full swing.

Everybody is enjoying themselves and the newly weds couldn't be happier. Atún and Adrián are getting some great footage. While outside, Adrián decides to interview the children's entertainer. They get interrupted by Adrián's uncle, as he starts vomiting. Putting it down to him being drunk, they ignore him, even though he looks worse for wear.

Shortly after, the seemingly drink uncle heads inside the building and sits on a balcony overlooking the ballroom. He then falls onto the floor below in full view of everyone. His wife approaches to help him up but he awakens and bites a chunk out of her neck and then proceeds to puke all over another guest. What follows next can only be described as all fucking hell breaking lose! Suddenly more guests are infected with the demonic virus and burst onto the dance floor, attacking other guests. People are fleeing for their lives and in all the madness, Clara and Koldo are separated.

Everyone is in a fight for survival, so now Bride and Groom have to find their way back to each other risking life and limb and the threat of attack from friends and family. With possessed zombies everywhere and the living becoming fewer in numbers, they each cling on to the hope that the other is still OK. In the fight to find one another, they both have to arm up and kick some ass. But will they be reunited before it's too late and will they get out alive?

The movie does cross over with [REC]:
The dog that's mentioned in the first film is the same dog at the vet that the uncle is bitten by and there's a scene where Koldo is in a CCTV control room with a TV on in the background, a news report regarding the quarantine of an apartment block in central Barcelona is shown, revealing that the events of this film are happening concurrently with the events of the first film. And of course the initial demonic infection is the same one as spread by the young girl from the original film.

This horror sequel was one of my most anticipated movies of 2012. Did it disappoint? NO!
Is it as good as the first two films? It's not as good as the first one but it's on par with, if not slightly better than the second. The real difference with the third instalment is that it starts off in the "found footage" manner, with shaky hand held cameras. It also switches between security camera footage, but the majority of the movie is shot normally.

The script is fun, well constructed, delivered by the cast well and the dialogue flows with the gory action. It offers the same quality as the first two films, but is it's own film, in it's own right.