As part of disturbingfilms.com's Zombie Week 2012, which runs from March 12 - 17, I'll be reviewing four Zombie movies from the 00's. The four movies I've selected have taken us across the globe, covering four continents, starting in Europe (UK), then from Africa to Australia, finally ending up in North America with the fourth film... 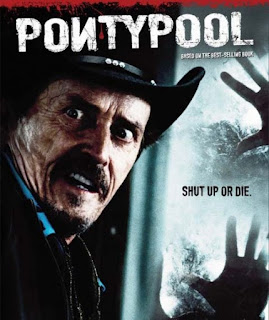 
The Plot -
Pontypool, a small village in Ontario, Canada, where one day, in a radio station, the morning team starts taking reports of extreme, bloody incidents of violence occurring in town. As the story unfolds, the radio staff soon realises the violence that is ripping society apart is due to a virus being spread through the English language. That in turn poses a problem for a yappy radio jock and his staff holed up in the broadcast booth housed in the basement of the town's abandoned church as a slaughter rages beyond its walls. 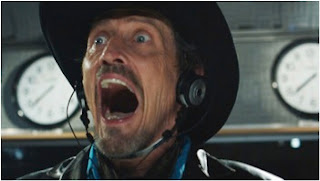 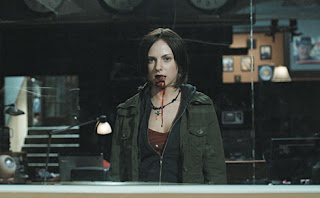 Small town DJ Grant Mazzy is on the way to the radio station for the early morning talk show when out of nowhere a woman bangs on his car window, so he stops to see whats wrong and pulls down the passenger window. He only gets a couple of words from her and as she steps backwards away from the car she disappears into the snowy morning. As he shouts to get a response, all he hears is his own echo. Baffled by what just happened he carries on to work to join producer Sydney and sound tech. Laurel-Ann. As his radio show airs, they get disturbing reports of people attacking one another and speaking incoherently. Through the course of the show the reports get worse. The uncontrollable, crowds are dieing at the hand of the local enforcement. Mazzy and his team soon release that they are trapped in their studio. Laurel-Ann's behaviour becomes confusing as she struggles to make any sense with her sentences.
Arriving on the scene, though a window in a back room is Dr. Mendez, who tries to shed some light on what's going on. As Laurel-Ann's condition becomes worse, she starts trying to smash though the sound proof glass, where Mazzy, Sydney and the Doctor are locked away for their own safety. They come to the discovery that an infection, though the English language is turning people into a zombie like state. Now they have figured out what's causing the carnage on the outside as well as in the studio, do they try to escape or do they search for an answer to revert the situation?

Let me start off by saying "hmm." Yes, hmm, this is a bit of a weird one. Is it a Zombie movie or not? It's not a Zombie movie in the traditional sense. What we have hear is a very different take on the "infection of mankind" that leads people to a Zombie like state. The tension is built on purely what we hear during the radio show, which is good. But when it comes down to it, nothing really happens. I have conflicting views on this movie. Was it a work of genius? Or is it just pretentious? There's a message in there somewhere. Or maybe it was just a dig at the English language by a French Canadian! Either way, this is one of those film you're even gonna love or hate. Personally, I still don't know which one it is yet!