As part of disturbingfilms.com's Zombie Week 2012, which runs from March 12 - 17, I'll be reviewing four Zombie movies from the 00's. This is the second film... 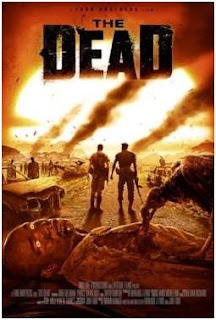 The Plot -
When the last evacuation flight out of war-torn Africa crashes off the coast, American Air Force Engineer Lieutenant Brian Murphy emerges as the sole survivor in a land where the dead are returning to life and attacking the living. On the run in a hostile and inhospitable parched landscape, where sudden death lurks around every sun-burnished corner, Murphy has to use his wits and ingenuity if he is to get home alive to his family. When Murphys path clashes with that of Sergeant Daniel Dembele, whose village has been torn apart by the reanimated dead, they join forces. The two desperate men from two very different cultures fight side by side to survive across the incredible scenery of Africa as the world succumbs to the deadliest of viruses. 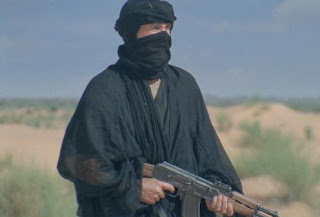 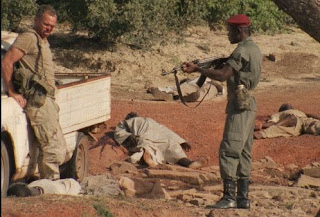 The Review -
Set in the desert wasteland of Africa, we see a lone figure, dressed in black, making his way through the sandy but rugged terrain. It doesn't take long before he has company. Shuffling slowly towards the armed man, broken leg in toe, is a Zombie, which is passed by, by the unknown gunman. Just over the next dune though, he has to take action when another Zombie appears.
Cut to the next scene, on board a small plane, filled with military personnel and civilians alike. One man has been bitten and going into shock. The plane is running out of fuel and eventually crashes just of the cost. The only survivor, American Air Force Engineer Lieutenant Brian Murphy, is now stranded in hostile territory having to fight for his survival in order to get to his wife and child.
Meanwhile, in a near by location, Sergeant Daniel Dembele returns to his village to find it empty of the living and occupied by the walking dead, as it was evacuated the night before. His mother, fatally injured, barely breathing, tells Daniel that his son was taken to safety.

Brian and Daniel's paths soon cross. Brian wants to head to an airfield to see if he can find a plane that can fly and Daniel wants to head north to find his son. They decide to help each other towards each destination.
Upon discovering the abandoned airstrip, Brian stays the course with Daniel to find the camp in the north that Daniel's son was taken too. In between them and their final destination stands a numerous amount of flesh hungry killers. But with a hot desert by day, the cold nights and danger lurking behind every rock and bush, will the two soldiers find sanctuary or pay the ultimate sacrifice at the hands of the infected dead?

This is a road movie, with the backdrop of Africa and classic slow moving Zombies. Don't expect an action packed movie. Although there is plenty of rather good bloody special effects, most encounters are brief and to the point. This movie has more of a drama feel to it, drawing you into the harrowing story rather than distracting you with mindless violence. It very much has the feel of Stake Land (2010), but with Zombies instead of Vampires. The cast give believable performances. It's well scripted and directed and is definitely worth a watch for fans of the Zombie sub-genre.