As part of disturbingfilms.com's Zombie Week 2012, which runs from March 12 - 17, I'll be reviewing four Zombie movies from the 00's. First up is the British film Devil's Playground... 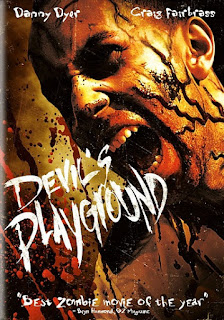 The Plot -
N-gen Industries, a leading pharmaceutical company, develops a new "legal performance enhancer" called RAK-295, that has bad side effects on all but one of their 30,000 test patients. In order to control the media uproar, Cole, the head of security is sent to find the immune patient Angela and bring her in for examination. But the hardened mercenary, Cole, comes up against more than just the infected in a bid for survival. 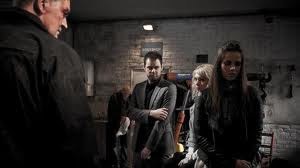 The Review -
London, in the not too distant future, while Peter White, the CEO of N-gen Industries, gives a cover speech to the press, all is not as peachy as it sounds.
Our hero, Cole, is charged with finding and bringing in Angela, to help find a cure for the ever increasing threat of the outbreak which is beginning to spread throughout the city. Cole is already battling the demons of his violent past, suffering flash backs to an act of cold blooded murder. And to make matters worse, he gets bitten, giving him little time to do his job, before the inevitable happens. Being the man he is, this only spurs him on to take on the army of bloodthirsty creatures.

Meanwhile, getting out of prison is Joe, an ex cop, with a tainted past of his own and wanting to get in contact with Angela also. It's not long before the spread of infection takes a turn for the worse, effecting more and more people, which is realised when the news broadcasts get interrupted by the deadly and very agile Zombies. Cole, tracks Angela and friend, Kate, to a workshop where Joe happens to be, along with friend Steve and two passers by, Lavinia and her American colleague.

The plan is to get to a helicopter across the other side of London where Angela's Police officer step-brother awaits. Between their location and the helicopter, it's a game of fight and flight, not just against the Zombies but against each other within the group. The question is, will they all make it in time to see Angela's immunity to the virus save the day? 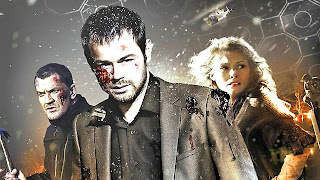 With the solid British cast and a presentable story, even though it's not original, this is a pretty good attempted at a Zombie movie for the first time film director Mark McQueen. Craig Fairbrass (Cliffhanger, Rise of the Footsoldier, Dead Cert) steals the show even though it's Danny Dyer's (The Football Factory, Severance, Doghouse) name in the top spot of the credits. OK, that's not hard, it is Dyer, but this wasn't his worse or best role. MyAnna Buring (Doomsday, The Descent: Part 2, Kill List), played a fluid leading lady. The supporting cast filled in the gaps. Sean Pertwee (Dog Soldiers, Equilibrium, Doomsday) plays a bit of a cameo. Not to get carried away, there's no Oscar winning performances here, just decent enough acting to keep your attention.

Besides the look of the Zombies and the fact they eat people, they really don't have anything else in common with other Zombies, from other movies. They're very fast and agile. In fact, they could be mistaken for professional free runners! Some may find this off putting, while others may find them more frightening.

"The blood and gore?" I hear you ask! Well, there's plenty of skull beating action with various objects, but the humble hammer seems to be the favourite here. The blood flows freely, from both bites and strikes, and the special effects look real enough without being over the top.

Overall, I did enjoy this movie. OK, I'll be honest and admit I wasn't expecting much though. It's no 28 Days Later but it is a better than average Zombie film worth giving a go.