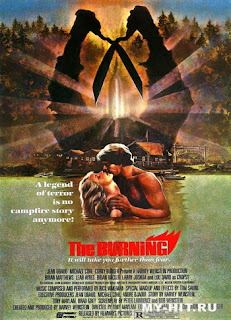 
The Plot -
At Camp Blackfoot, five boy campers decide to frighten the caretaker, Cropsy. When the prank goes wrong, he is accidentally severely burned. Years later, after treatment at an institute and recovering from his injuries, even though they have not just scarred him physically but mentally also, he is released, and returns to the camp with a pair of hedge clippers to take revenge on the campers.

The Review -
Cropsy, supposedly a cruel, alcoholic, sadistic caretaker, although we never see evidence of this, falls ill to a prank gone wrong, very wrong!
After five pranksters wake him up abruptly with a skull covered in dirt, worms and flames for eyes. Cropsy knocks over the skull, setting fire to his legs and then to a container of fuel. A bad mix, as the fire spreads throughout the cabin, it soon goes up in flames, as does Cropsy. After his recovery, some five years later, he's released, with a not so good consequence, as he takes his anger out on a hapless hooker, with a pair of sharp scissors and a mind for murder. 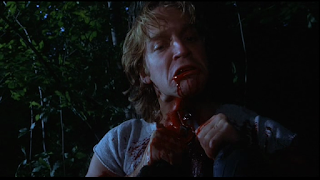 Meanwhile, at summer camp, the movie turns to the building of the young characters. Adolescent boys canalise the scantily clad girls, pranks are played and threats are made, you know, good old fashion teenage fun! But lurking in the shadows is the disfigured Cropsy, watching and stalking his prey. 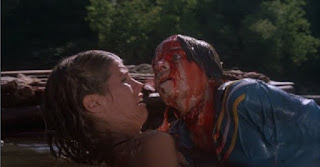 A group of the older kids take a canoe trip and go camping. This where the real fun begins, as the burnt murderer starts taking them out, one by one, leaving behind a bloody mess. The guy really knows how wield those hedge cutters.
All this leads to the final scene, a face off between camp councillor Todd, with an axe and a dark secret, and Cropsy, with his cutters and a flame thrower.
Who will come out on top? Will the crispy caretaker exact his revenge or will Todd say the day?


You've got to love the 80's and what it had to offer with these kind of films. It's not the best classic slasher in the world but it holds it own when it comes to the kills scenes. What I liked the most about this movie was it's simple, effective and bloody special effects. Something which a lot of modern horrors are over looking now-a-days with the use of CGI. The humble hedge cutter is such an under used weapon but it serves up some great deaths in this. I can't even count the times I've been trimming the hedge in my garden and had that thought, hacking away at branches, pretending it was someone I didn't like. Or is that just me? Anyway, I digress!


What I didn't like about this movie; I thought it went too long between the first two kills. After the hooker is taken out, it's nearly an hour before we see the next victim get it. However, in the raft murder scene, it kind of makes up for it. I also thought that Cropsy was unfairly treated, with the camp fire stories and maniac label. A couple of those kids deserved what they got, specially one of them! If someone set fire to me... But that's an idea for a whole different movie.

My overall thoughts? This can definitely be called a classic and every slasher fan should see this movie, at least once in their lives. As I said before, it's not the best slasher out there but it is better than average.