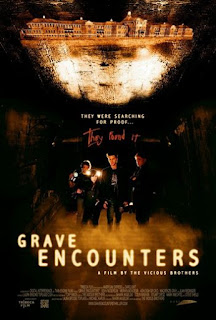 
The Plot -
Lance Preston and the crew of "Grave Encounters", a ghost-hunting reality television show, are shooting an episode inside the abandoned Collingwood Psychiatric Hospital, where unexplained phenomena has been reported for years. All in the name of good television, they voluntarily lock themselves inside the building for the night and begin a paranormal investigation, capturing everything on camera. They quickly realise that the building is more than just haunted - it is alive - and it has no intention of ever letting them leave. They find themselves lost in a labyrinth maze of endless hallways and corridors, terrorised by the ghosts of the former patients. They soon begin to question their own sanity, slipping deeper and deeper into the depths of madness, ultimately discovering the truth behind the hospital's dark past...and taping what turns out to be their final episode. 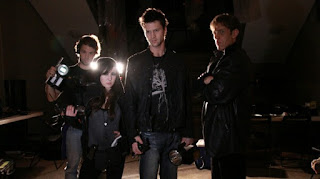 The Review -
The film is introduced as a "found footage" piece by Executive Producer, Jerry Hartfield, of the reality TV show. He gives a brief introduction to the show and crew. The tape begins and the show starts. It all looks very cheesy then you realise that these guys aren't really the ghost hunters they say they are as they seem to fake their way around. You get the feeling they're into it for the money and fame!

As they set up the cameras in the old building, they're locked in for the night and that's where the fun begins... 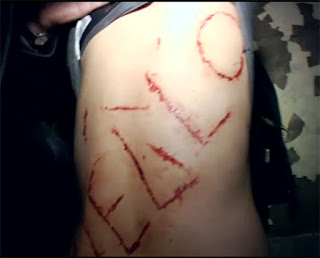 They spilt up into two teams and head down various corridors and in rooms in the pitch black armed only with torches and cameras.

They soon realise they are not alone and that the proof of the after life they're searching for does exist, as one by one they all experience some very strange things.

From objects being moved to scratches on Sasha's body to full scale apparitions, they see and feel it all! 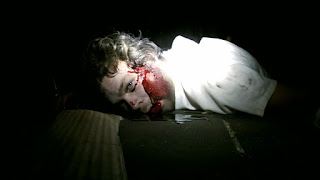 When it all gets too much for them they decide to leave but find it's too late after one of the team is missing and they seem to be trapped in the building.

Sure enough as they search for their fellow team member all hell breaks loose and one by one they get picked off by the spirits eventually leaving Lance on his own and finding himself going insane.


I really don't have anything bad to say about this movie. It's not an original story but it's delivered well. I could pick on the acting, but then the cheesy act is all part of the show and when it does get serious so do the actors. The special effects, simple and very effective. It had some bloody scenes, scenes that make you jump, scenes that will probably scare you and freak you out. It does it's job and it's one of the best "found footage" films of the sub-genre there is to date. I'm doing this review after watching it for the second time and I'll say this, it was just as good if not better the second time round!

I highly recommend this movie for all horror fans. Grave Encounters gets an 8/10