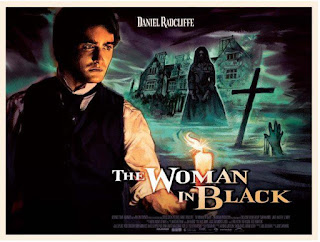 The Plot -
The Woman in Black follows a young lawyer, Arthur Kipps, who is ordered to travel to a remote corner of the UK and sort out a recently deceased client’s papers. As he works alone in an old and isolated house, Kipps begins to uncover its tragic secrets, and his unease grows when he discovers that the local village is held hostage by the ghost of a scorned woman set on vengeance. 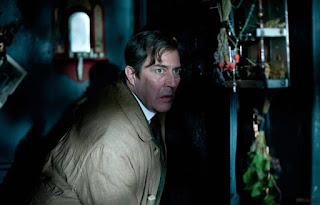 The Review -
The movie opens with three, slightly creepy, little girls playing in a room. All I'll say about this is that it doesn't end well! 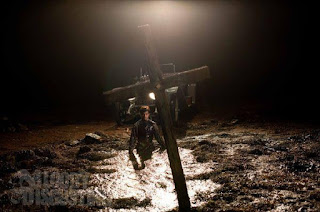 The scene is then set in gloomy old London around the late 1800's. Young lawyer and father,  Arthur Kipps, is preparing to leave for an even more gloomy remote part of England. After arranging to meet his son and son's nanny later in the week he jumps on a train. Waking up near his stop he meets local landowner Sam Daily, who later helps him out around the village he is soon to arrive in.
As soon as Arthur arrives he gets the instant feeling of not being welcomed!
Shorty after local man Keckwick drops Arthur off at the old Humfrye mansion, where he has to sort through paper work, he starts to have a look around the place and things start to get spooky and the flash backs of his dead wife become more frequent.

Later back in the village a small child takes ill and the Jerome's daughter, Lucy, also ends up dying in tragic circumstances, all while everyone is displeased with Arthur's presence. In an attempt to find the truth behind the strange goings-on and what really happened to Jennet Humfrye, even more supernatural events happen and Arthur literally digs deeper with Daily's help to find out why the children of the village are dying. This all leads him back to the mansion for a face off with the ghost everyone is afraid of. 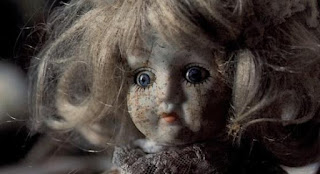 The first thing I'll say is that, even for the 12A/PG13 rating, this is pretty strong stuff. Dark rooms, candle light, ghostly shadows and creepy old toys set the tone, but not one of eeriness, one fraught with tension of making you think "what's the hell's coming next?"


I watched this with my wife (who by the way wasn't phased by Paranormal Activity, unlike me) and she was literally sat behind a pillow, jumping and screaming at least 10 times throughout the movie, which in turn made me jump! At one point near the end of the movie, the hair on both our arms were stood up.

I got more than I was expecting from this film, which is always good. The only bad points I would pick out is that Daniel Radcliffe looks too young to play a father and looks weird without glasses (obviously a curse from Harry Potter) and it is predictable in places. However, the script and direction make up for that. Radcliffe gave a solid performance as did the rest of the cast. The ending has a good little twist, but beware that this a morbid tale of death heavily revolving around children, so it could leave you feeling down and depressed! Oh, and a heads up, don't take your eyes off the screen until the credits role.

The Woman in Black gets a chilling 8/10