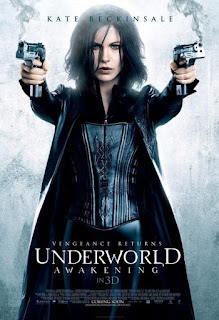 The Plot -
Humans have discovered vampires and werewolves living amongst them. A "purge" was ordered, and both species were driven to the brink of extinction. During the genocide Selene is captured by Antigen and held in a cryogenic tank for 12 years while the company experimented on the unsuspecting vampire warrior. Selene, dubbed "Subject 1", is freed from cryogenic suspension by "Subject 2" and escapes the medical corporation. Selene starts to have strange visions after her escape, which she follows, believing them to be linked to her lover, the Vampire-Lycan hybrid Michael Corvin. With more visions, she discovers not Michael, but a young girl called only as "Subject 2," also known as Eve, later revealed to be a hybrid and the daughter of Selene and Michael. 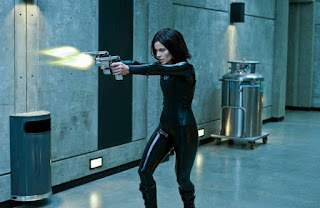 The Review -
Let's get one thing straight from the start, I'm a massive fan of the Underworld franchise and couldn't wait to see this! And to make things worse my local cinema, which shall remain nameless so as not to encourage burning down of said cinema, wasn't even showing it! WTF? I was furious and swearing a lot to say the least. Anyway, I digress.
Back to the movie...
Two important questions - What was I expecting and What did I get? 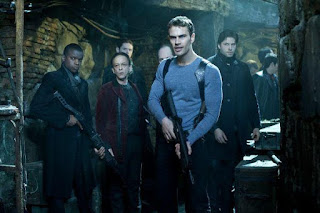 Answer - Gun blazing action and GUN BLAZING ACTION. I was not disappointed!
The story was simple, frozen for twelve years, wake up, find bad guys, kick ass, find Subject Two, find more bad guys, kick ass. The delivery was perfect. The fighting, the shooting, the action, is literally from start to finish, constantly keeping you entertained. Kate Beckinsale slipped back into the role so easily and looked more comfortable than ever during the brilliantly choreographed fight scenes. 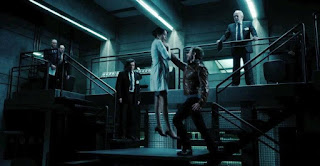 The Lycans are back in full force and give a hidden vampire coven a good beating, even Selene gets thrown around a hell of a lot more in this one.

Also prepare yourself for the biggest werewolf you've ever seen, it makes the Twilight werewolves look like friendly rabbits!


Kris Holden-Ried plays a good role, even though his character isn't far from being similar to the one he's got in Lost Girl. You'll know what I mean if you watch that TV show and watch this movie.

The up and coming actor Theo James was a good edition to the cast. India Eisley who played the young daughter of Selene can be described as a rising star and after her transformation to hybrid she would certainly give Regan ( The Exorcist ) a run for her money on the evil looks!

The question of "Where's Michael" runs through the entirety of this film, but all I'll say is this - It's left wide open for the 5th instalment!

The special effects throughout are solid. The only thing I can fault it on was the time. It was too short at an hour and 15 minutes, I could have easily sat watching for another twenty minutes or so.

If you're a fan of the franchise then you should love it.  Underworld: Awakening gets a 9/10