Paranormal Activity: The Marked Ones (2014) Review 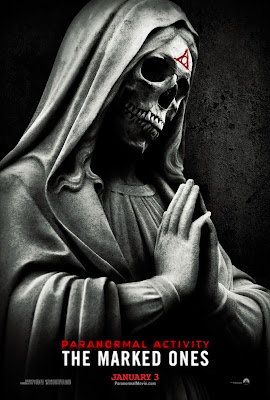 Paranormal Activity: The Marked Ones is the 5th instalment in the very successful found footage franchise. However, do not get this new film confused with number 5, that's hitting cinemas this October!

Before I go any further, I have to point out that I've been a big fan of the franchise and the first film actually freaked me the fuck out in a massive way. Not since the age of around 11 watching Poltergeist was I effected by a horror in such a way! That said, I didn't like number 4 at all as it was way below par compared to the rest. Despite that, I was looking forward to The Marked Ones.

Starting off at a graduation ceremony in the year 2012, we soon start following the antics of Jesse (Andrew Jacobs) and Hector (Jorge Diaz). Clowning around with a new camera, they spend the next few days just randomly shooting there everyday activities.


Jesse lives with his sister, father and grandma in an apartment complex. His mother has passed away. Below them lives Anna (Gloria Sandoval) who has a bit of a reputation of being a bruja, (WITCH in Spanish). With their escapades they stumble upon some rather disturbing behaviour from Anna, but that is soon overshadowed by her death which involved Jesse's friend Oscar (Carlos Pratts).

After her death, the two lads have a look around in Anna's apartment. Shortly after, Jesse starts to exhibit some strange behaviour of his own that can't really be explained. Over time Jesse becomes distant. His friends Hector and Marisol (Gabrielle Walsh) become concerned when Jesse's actions become threatening.

They seek outside help from a couple of sources in an attempt to help Jesse and to try to fathom what's going on. But the further they dig the worse the situation becomes. When Jesse disappears they try to find him at a location given to them by a contact they found called  Ali (Molly Ephraim). This leads them into more trouble than they could ever expect. 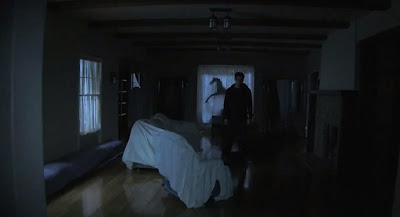 Like most found footage flicks there's that introduction period, you know before the really interesting stuff happens. In this the character development is at a good standard, keeping you just enough interested in the normal everyday things that happen. I did reach that threshold where I was thinking to myself "come on, it's time for the scary stuff now" and sure enough not a minute later it kicked in.

If you're old enough to remember the electronic game "Simon Says" (pictured right) then you'll get a kick out of a couple of scenes. Instead of the same old use of a Ouija board, we see this apparatus get a rather genius twist.

Unlike the terrible 4th film, The Marked Ones gives us a different story arc and a new outlook on the material covered in number 3. In fact, this new instalment intertwines with the first 3 films in some way or another.
I really want to tell how, so if you don't want spoilers, jump the next paragraph...

2 of the locations should ring alarms bells, this is towards the end of the film and they are the grandma's house in the PA3 and Katie and Micah's house (PA). If you've watched any of the trailers for The Marked Ones you should remember seeing Katie and Kristi (as children PA3) who both make an appearance. It's only brief and to be honest I really didn't see the point, unless it's to do with a certain door. Ali Rey (Molly Ephraim) is the daughter/step-daughter from the PA2. Again, a link to PA2 is the box of VHS tapes that went missing (now found in Anna's apartment PA:TMO), which of course was the feature in the PA3. And for those that research their films before seeing them you will know that Katie (Katie Featherston), just like in the PA4, pops up as well.

All in all this is a very strong addition to the franchise and the crossover with the other films is great. Fans of Paranormal Activity should love it. I enjoyed it a great deal.

The acting is solid, especially from the lead actor Andrew Jacobs. There's some really cool FX and a couple of misdirections which delivery decent jumps that maybe the other films were missing a little. The ending is blunt, but I'm now looking more forward to Paranormal Activity 5 and I'm hoping it will tie the existing films together.

Christopher Landon (writer of PA2, PA3, PA4, PA:TMO) certainly made up for the 4th film with this, plus this is only the 2nd film he's directed, and he directed it well.