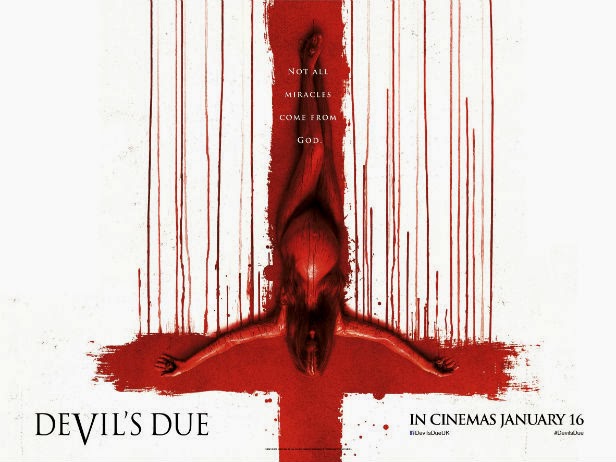 Devil's Due hit theatres on the 16th, although I didn't go to see it till last night. The flick is the latest entry into the found footage sub-genre and with Paranormal Activity: The Marked Ones still showing at the cinema, it's got mayor competition.

With most found footage films there's someone annoyingly sticking a camcorder in people's faces and in this case it's Zach (Zach Gilford) making a home movie or a "family history" as he embarks into marriage with Samantha (Allison Miller). After the wedding day, which turns out perfect, newly weds Zach and Samantha McCall head to Mexico (I'm sure it was Mexico, I kind of missed the location) for the honeymoon.

Enjoyable times are had site seeing, on the beach, drinking and partying, all of course is captured on Zack's camera. On the last night there the couple grab a taxi back to their hotel but the diver insist that he takes them to somewhere fun out of the city. Although nervous about where they are headed when they get to the destination they soon relax and let the good times roll.

Now back in the States and it's not long before Samantha finds out she's pregnant, much to her shock, but to Zack's delight. And as you'd expect, this is where Samantha starts to act strange and other weird things start to happen. At one point Zack becomes so concerned he takes a look at the footage from the honeymoon to see if he can find anything to help explain what's going on. 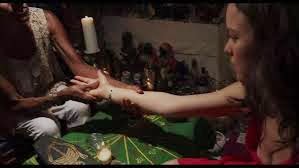 As I mention, I missed the location of the honeymoon. This was down to the fact I had very little interest in what was going on! In fact the best character in this film was the taxi driver (Roger Payano) who you only see a couple of times. I'd like to say there was a couple of interesting things that happened on their honeymoon, but what did happen was way too predictable. For example, going to see a palm reader (pictured above) and being told bad news or getting freaked out by a frightful Spanish lady.

OK the acting was solid, but that counts for nothing when character development is missing, which I'll back to. The movie was just too generic for a sub-genre that's been overloaded in recent years. It was like going round to your friends house and they decide to show you their home movies. You know the type of evening, fakes smiles, fake laughs, pretending you're enjoying it but secretly wishing you were drinking or even hadn't gone round in the first place. That's how I felt. This is why character development is so important. I literally didn't care what happened to Zack or Samantha, especially since you could tell she didn't want to get pregnant in the first place.

There was parts of the film that were incoherent. Zack's camera was the main focus, but at one point randomly switched to security cameras in a supermarket, a car park and even completely random kids with their camera phones. Zack's dog seemed to disappear and reappear. The overall direction by Matt Bettinelli-Olpin and Tyler Gillett lacked zest and inspiration. The actually story was good, but it should have been turned into a better screenplay by Lindsay Devlin.

I know there are a lot of horror that aren't a fan of the shaky cam style of shooting. I don't mind it, in fact if done right found footage can be very effective, but even I though it got a little shaky in certain parts, and these parts were the ones I was most interested in. There was a couple of semi-cool scenes and FX, but it still didn't deliver any that special. Here's the most frighten thing about the movie, NOT one person inside the cinema jumped or screamed! You know when you hear people say "all the best bits are in the trailer" and you think to yourself that's not necessarily true? Well in this case, it's TRUE!


DESPITE THE POTENTIAL OF A GOOD STORY THE DEVIL'S DUE WAS UNINSPIRED, UNINTERESTING, NOTHING NEW AND LACKING IN WHAT OTHER FOUND FOOTAGE FILMS HAVE TO OFFER

This is where I normally post the trailer, but since it does show all the best bits, check out the Devil Baby viral video instead...