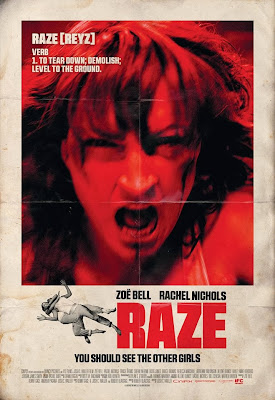 The action/horror Raze hit the big screen and VOD this week. It's been on my radar for a very long time so I was excited to finally sit down to watch it last night.

Now, the premise of a group of individuals fighting to the death isn't an original one, but the difference in this film is that all the fighters are women and I honestly can't recall ever seeing that before.

The story is simple. A secret society, ran by Joseph and Elizabeth (Doug Jones, Sherilyn Fenn) kidnaps women and puts them in a one on one fight to the death. To motivate the fighters, this society keeps a watchful eye on the fighter's loved ones, parents, children, husbands etc. If they lose, their loved ones also die! The winner gets to join the secret society. Everything is overseen by head guard Kurtz (Bruce Thomas).

For the pervert guys out there that might think this is going to be some sort of sexy wrestling, think again. If you've ever seen women fight in real life, you should know they're a hell of a lot meaner than men and the women in this film are no exception! The first fight happens inside the first 10 minutes and it's an absolute brutal start to the proceedings. It's not some bitch fight either. The fights are very well choreographed and use the modern techniques of MMA (mixed martial arts).

The protagonist is Sabrina, played by the very skilled Zoe Bell. For those that don't know Bell, she's probably best known for her stunt work as Uma Thurman's stunt double on Tarantino's Kill Bill and staring as herself in Death Proof. The main antagonist is Phoebe (Rebecca Marshall). The other fighters include Jamie (Rachel Nichols), Teresa (Tracie Thoms), Cody (Bailey Anne Borders) and offer up the normal set of characters, the heroine, the weaker frail one, the complete bitch etc etc. This is established with efficiency.

There's not a great deal of back story to each character or how they even got there, but this doesn't impact anything we see on screen. The little info that is provided is more than enough to get you into the film and pick a character to route for. You'd think this is a little predictable, but you find yourself picking a winner for each fight for different reasons and not just blindly wantong Sabrina to win all the time. Then there's Phoebe, as much as she's the annoying "I hope she dies straight away" character at the beginning, I found myself strangely liking her even though she's sick and twisted.

Each female is locked away in her own cell and has a TV monitor so she can watch the fights. Friendships and rivalries are formed despite the conditions and of course there can only be one winner. But who and how might not be what you expected. 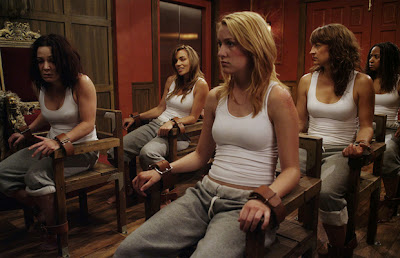 With any film like this there is always going to be a certain amount of predictability. That said it did have me looking one way and punching me the other a couple of times and there is certain scenes that will kick you in the face and still have you second guessing yourself. It constantly kept my attention and kept me thinking about what's going to happen next. When it was predictable I still enjoyed what was happening because it was what I wanted to see.

The sheer brutality of the fight scenes will have you wincing with disturbance. The violence is immense and bloody as hell. There's no fancy high flying super kicks like you see in so many martial arts films, but rather it gets down and dirty with efficient technique and the final finishing blows are just plain nasty.

Besides the action, the acting is solid from all the cast as they all deliver believable performances. Josh C. Waller direction keeps you glued to the screen even when the action dies down. If anyone says this film was boring in anyway or any scene then they're lying!

It really is a fresh, clever and an interesting take on a tried and tested story. The ending is open interpretation so this leaves you thinking about it well after it's finished. There really wasn't anything I didn't like about this film and I'd go as far to say that it completely exceeded by expectations and blew my mind. I highly recommend Raze and already have a feeling this will be one of 2014's best films. I really do think it's that amazing!


DARK, SADISTIC, BARBARIC, UNMERCIFUL, UNRELENTING BLOODY VIOLENCE AT IT'S MOST GRIMACING. RAZE WILL KICK YOU IN THE FACE AND KEEP YOU WANTING MORE