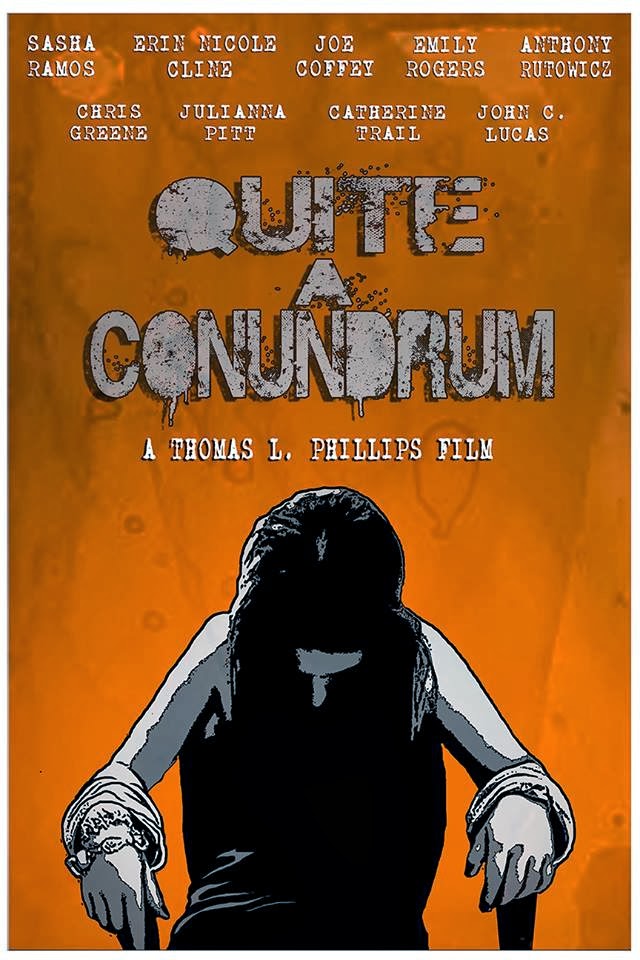 Quite A Conundrum is directed, written and produced by Thomas L. Phillips. His independent film is not just a comedy horror. It also plays out like a physiological thriller.

In the opening scene we see Mimi (Sasha Ramos) being mounted by "the one eyed pirate" Marc (John Lucas). She's 25, he's 52 and works for Mimi's father. After 2 pumps and a squirt, Mimi explodes with insult and abuse due to the lack of satisfaction and dumps the poor old dude. Needless to say Marc exits with a huff and puff, but not before leaving Mimi with the smell of "rusty pennies."

Anyway, back to the normal day ahead and Mimi is joined by Tabitha (Erin Cline) as she works out hitting a punch bag. Meanwhile, Tabitha dances around to the workout music.

With Mimi's dad away on business there's only one thing to do and that's party! Tabitha's boyfriend Sean (Chris Greene), his friend Dutch (Joe Coffey), Mimi teenage sister Kylene (Emily Rogers) and her boyfriend Harris (Anthony Rutowicz) are all going to be there for the fun with Mimi.

The early part of the film is taken up with the girls getting ready for the party. It's not till Sean and Dutch turn up when the party gets going. Harris arrives shortly after, dropped off my his god fearing mother, Thelma (Catherine Trail), who has to have a chat with Kylene before she heads off to Jesus Bingo.

The fun is now in full swing, the alcohol is flowing, the tunes are playing and everyone is poolside in the backyard. They're suddenly interrupted by Marc. Yes he's back, and naked! Still rather distraught about getting dumped by Mimi not 12 hours ago, he pulls a gun and makes Mimi confess to her friends what she called him that very morning. Instead of shooting Mimi or anyone else, he turns the gun on himself and blows his brains out in the pool!

Here ends the fun and frolics which is replaced by panic and confusion. They now have to deal with the dead naked fat guy in the pool. Do they call the police? Will Mimi's secret affair be discovered by her dad? Or will someone else be a problem for them and cause even more mayhem then they expected? What was a fun night soon turns into the worse party ever.

The first thing I want to point out is that it was refreshing to see adult characters in this type of horror instead of the same old collage kids and snotty teenagers. OK, so there is 2 teenage characters, but that's still not bad.

The movie is filled with humour throughout. But it's not your silly "laugh out loud" type stuff. It's very witty and quite dark in places. In fact, the script is very cleverly written by Phillips and probably the strongest thing about the film. It also has some of the best lines in a horror, EVER! There were parts that reminded me of something out of a Tarantino flick with the way the conversations flowed and then I would sense a touch of Jay & Silent Bob in there!

Of course, this had to be delivered by the actors well for such a script to work, and it was at that. For a relatively inexperience cast they conveyed a lot of natural talent. All the cast bought something different and the chemistry between them all was great, but 2 really stood out for me. Emily Rogers was extremely good as the adolescent sister. She produced a very mature performance. But the most natural and inspired performance came from Erin Cline. Quite frankly she stole the show! Her charming cuteness out poured in bucket loads and when it was time to be scared, she was believable. This has to be credited to the direction also.

On the horror side of things, we're drawn in psychologically, rather than with blood and gore. The tension is there and there is a disturbing scene, but I couldn't help but feel if the score was better, it would've intensified certain scenes to give them more edge and conviction. For me, the score was the only real weak point.

Quite A Conundrum will be getting its worldwide release very soon and I recommend watching it. It put a smile on my my face all the way through, granted, sometimes that smile was a little sick and twisted, but in my case that meant the film did its job.