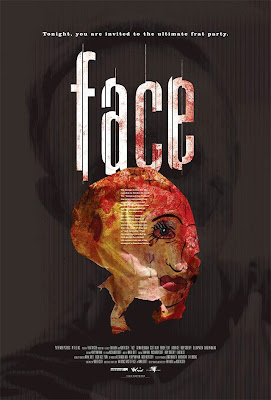 Taka Arai and Norith Soth's found footage film Face made it's premiere at the Another Hole in the Head Film Festival. Together, Arai and Soth produced, directed and edited the flick which is based on the short story "An Ironic Twist of Fate" written by Mikal Britt.

The movie is pegged as "leaked police evidence" from an event involving a collage sorority and a fraternity.

The film caught my attention straight away with nothing but simple words on the screen...

"The footage you are about to watch was recorded on October 31st, 2012. The Halloween Fear Factory was an annual competition amongst a fraternity and sorority that tailspinned into a gruesome nightmare of carnage and depravity...

The survivors claimed to not recall any details of the crimes. There is debate whether the loathsome acts were the result of drug use or "mob mentality." That the event was recorded by both parties has turned this account into one of the strangest in American History."

Carnage and depravity? Great, That's what I like to see in a film!

The film stars Scott Alin, Karoline Matini, Roby Sobieski, Brooke Diane Flint, Dillon Paigen, Lauren See, and Johnny D'Angelo. The main antagonist Matt, leader of the frat, is a real piece of shit and Jamie, the head of the sorority, fell victim to Matt in last year's event. Names of the characters are really not important though as there's no real character development, but that's not a bad thing. It's simply not needed in the movie. By 15 minutes in, I already hated the frat boys. They're pigs and had already committed numerous crimes including sexual assault! I was routing for the sorority girls straight away. 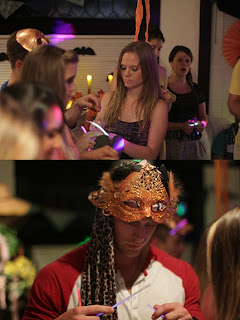 So the main plot here was the competition. The age old battle of boys vs girls. The previous year's Halloween Fear Factory was won by the Fraternity, so they already expected revenge from the sorority. Most of the film is occupied by partying and drinking etc. With the fact that the film takes place at a party it means there's a soundtrack, something that we wouldn't normally get in other found footage flicks. Mikal Britt, a writer/musician, provided the music in the film which adds a sense of chill and enjoyment to it, even though what's going on is the opposite.

With a few twists and turns, the film slows down the tension as it concentrates more on the story, but the fun soon kicks in again around 45 minutes in. Now, I kept thinking to myself "Come on girls, you can do better than this!" I wanted more than what I was seeing and initially took this as a sign of weakness about the film. But just over the hour mark I got what I wanted. In fact, at one point I actually said out loud "Did she just do what I think she did?!"

I had to rewind it to watch it again. This was due to 2 things. 1 - I wanted to make sure I was right. 2 - Because it's filmed in the manner it is, it was a little hard to make out.

This leads me to point out that if you're NOT a fan of the shaky found footage sub-genre, you might not like this movie. This however has no bearing on the overall feel and quality of the film. I don't mind found footage at all. It very cleverly uses footage from different sides, giving us a perspective story of both frat and sorority. And without spoiling it, the use of a certain camera angle was brilliant, something I can't recall seeing before. I have to admit I didn't see it coming, although most of the film is predictable. The script is kept simple and the acting flows quite naturally, holding your attention and making ready for the big pay off.

From the Press Kit: 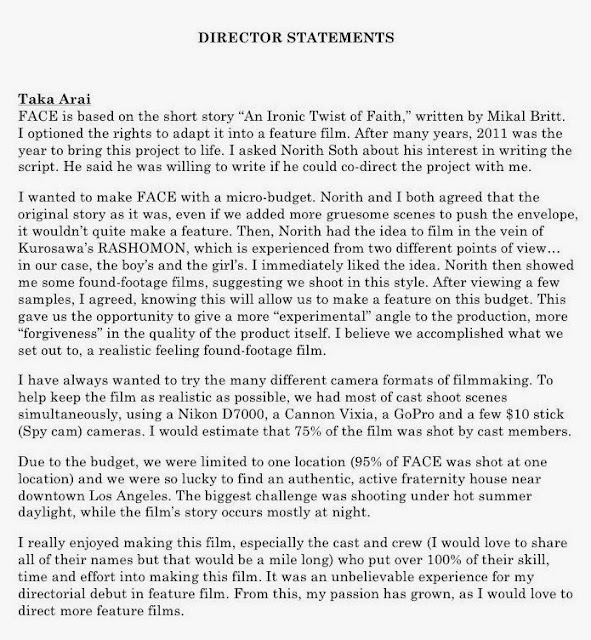 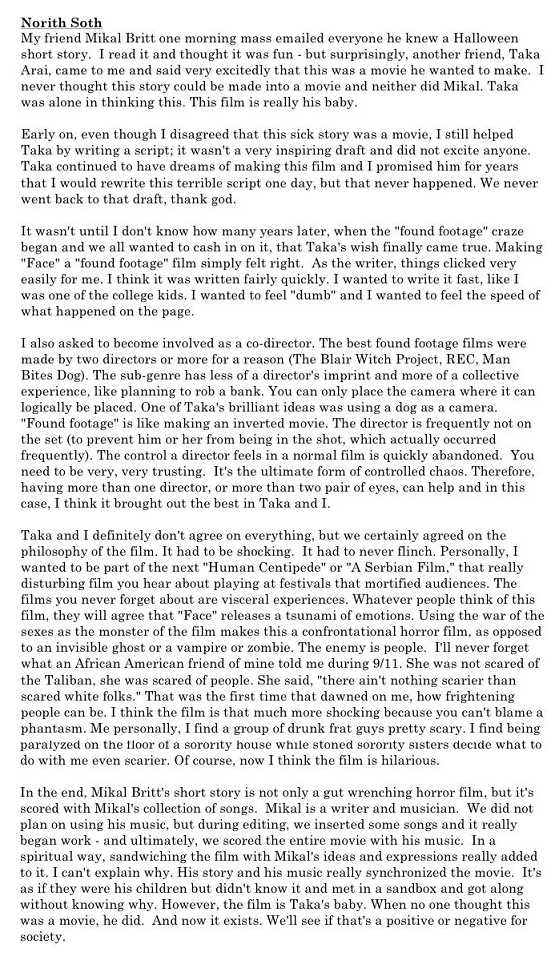 The project also had the help of Bloody Disgusting's very own Mr Disgusting (and producer on V/H/S). The overall result was an enjoyable watch and a very solid addition to the found footage sub-genre. The ending made the impact I was looking for throughout the the whole film. With a total run time of 1 hour and 14 minutes, it worth checking out. For further news of release dates, keep it locked to the Maven's Movie vault of Horror's Facebook page.


FACE WILL KEEP YOU HANGING TILL THE VERY END RESULTING IN A DISTURBING SHOW OF DRUG FUELLED WARFARE. THE MORAL OF THE STORY? GUYS, DON'T MESS WITH FEMALES ON THE PATH OF REVENGE!