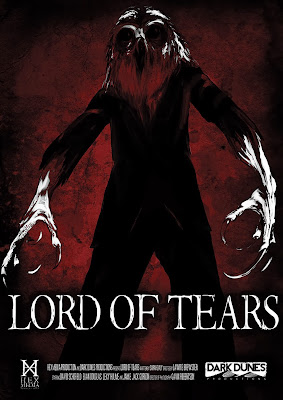 I always look forward to British independent horror, and Lord of Tears was high on my list to watch since first hearing about it. The film premiered right here in the UK (Whitby) at the Bram Stoker International Film Festival.

Set in the picturesque Highlands of Scotland, the film follows school teacher James Findlay (Euan Douglas) and his journey to past truths. Upon the death of his mother, James inherits the old family mansion, but a letter from his mother included in her will warns James not to revisit the home of his childhood.

He seeks advice from best friend Allen (Jamie Scott Gordon), who has problems of his own, and confides that a certain part of his childhood is missing from his memories. Against the warning in his mother's will, James heads to the house to see what he can dig up.

On arrival he meets Eve (Alexandra Hulme), a spirited woman, who he befriends. Over the course of the next few day, Eve starts to bring out the more cheerful side of James. But as night falls James is plagued by disturbing and far too real dreams of an Owl Man, that he fears is somewhat linked to more than his past.

The further James and Eve delve into the past, the stronger the presence of something dark and disturbing grows. When the truth becomes clear, James tries to make sense of what he sees right in front of him, but the past comes back to do more than just haunt him. 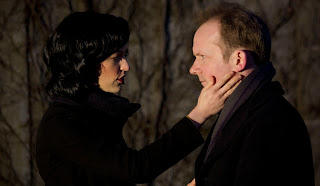 The first thing that instantly struck me from the very beginning was the eerie and rather sinister score. It creates a compelling feel of dread and fear throughout the entire film.

Secondly, the Cinematography was spellbinding, both devastating and spectacular and all at the same time in certain scenes! The dream sequences and flashing imagery give a an overwhelming foreboding feel which increased with the added score. And with an undertone of Gothic feeling, it really is very stimulating to eyes.

Onto the performances. This really is the only negative thing for me. I just couldn't warm to Euan Douglas. I understood his character, his motivation and that really was down to the excellent writing. I guess it was his inexperience as an actor as his delivery seemed a little to forced for my liking. Now, you would think that this would affect the rest of the film, specially since Douglas is the lead. In this case, not at all. This is testament to Sarah Daly delivering an incredible screenplay.

Gordon has very little screen time as Allen, but he still has considerable impact and although we never see his face onscreen, David Schofield provides the voice for the ever so creepy Owl Man. His voice over narration is entrancing. I have to add that, as a beard grower and connoisseur myself, Jamie Scott Gordon beard is magnificent!

Then there's the leading lady, Alexandra Hulme, with her classically beautiful 50's "Pin Up" style. Quite frankly she stole the show! She goes from innocent to sensual to caring throughout the film. She even gives an almost dream like performance a in couple of scenes.

This of course is helped along by some superb and clever direction from Lawrie Brewster. Brewster also produced some of the best editing I've seen. What may seem as random imagery is a very clever set up for the important parts of the movie. That's all I'll say without giving anything away!

This is a bit of a psychological slow burn horror, and that's always a good thing when done right, as it was here, which meant the film held my complete attention. With some interesting use of mythology and a major plot twist that even me, a seasoned horror veteran didn't see coming, this is definitely one to watch.


WITH A SPINE CHILLING SCORE & VIVIDLY NIGHTMARISH IMAGERY, THIS IS BRITISH HORROR AS IT'S EERIE BEST

You can head over to the website here and order a copy. Check out the Facebook page here and give it a "like." In the meantime, check out the trailer below...