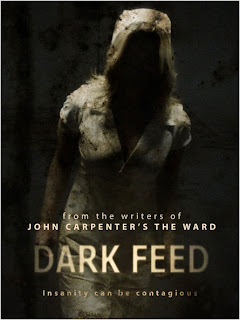 OK, let's get this out of the way first...
"From the writers of John Carpenter's The Ward."

Why don't I like that sentence? Well, as much as I rate Amber Heard and the rest of the cast were decent, I felt it fell short of the mark. Not due to Carpenter's direction, but down to the story itself. So instantly, I went into this film with caution.

In the movie we have a film crew, in fact, pretty much the whole production company, that have taken up residence in an abandoned psychiatric hospitals in order to shoot a low budget horror film.

Now, the hospital has, of course, a shadowy past. Like an infection, this past evil that once resided there, oozes through the walls, ceilings and floors.

The screenwriter Chris (Andy Rudick), is introduced to the cast and crew. But he is soon rushed out of the way by the director, Andrei (Jason Beaubien) and producer Harry (Jonathan Thomson). The production manager is sent to "baby sit" Chris and show him around.

The cast and crew are a mixed bunch, some down to earth, some are just plain weird and others, like the two stars, Rachel (Rebecca Whitehurst) and Jack (Michael Reed), act like prima donnas! Everything seems normal at first, but the longer they stay and shoot the movie, the more apparent it becomes that something is wrong.

One by one, whatever it is that possesses the hospital, has a profound effect on all those who work under it's roof. They each have their own individual experience. The more sane people out of them seem to be attacked by the unearthly presence, but the more outrageous characters exhibit increasingly strange behaviour.

Now the more mentally sound members of the work force realise that they need to get out of the building before it effects them to the point of death. But it's not that simple, as the old hospital has different plans for all those involved! 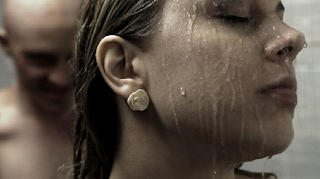 Even though the abandoned psychiatric hospital formula has been tried and tested, it takes something special to pull it off. This movie kept to that formula, but a little to close as it was predictable from start to finish. It had so much potential, but fell flat on it's face. It wasn't the VFX, which are above par, it wasn't even the story, but rather the delivery of a poor script by worse actors. And it's not like the directors (Michael Rasmussen and Shawn Rasmussen) failed in their department. There was some great scenes and I liked a lot of their vision. They provided some pretty decent gore too. Rather it was, what can only be described as, the piss poor cast!

I just didn't feel connected to any of the characters because of the poor acting from a poor script. Which in turn meant that, I didn't really care what happened to the them, so when there should have been a scene of suspense and tension, it was mediocre and lifeless. Even the score seemed to lack the punch it should have had.

So it wasn't original, which it didn't have to be, but it was predictable. I think with the right person penning the script it could have provided some decent scares, even with awful the cast. The Rasmussen brothers should stick to coming up with the story, not writing the script. And even though this was their first attempt at directing, it wasn't bad.

I wouldn't recommend this movie, but on the other hand, I wouldn't say give it a miss. I just feel let down by what could have been something great.