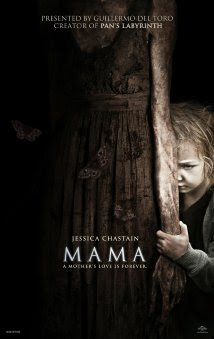 Before watching Mama, I didn't realise that it was based on the 2008 short film of the same name, also written and directed by the same Andrés Muschietti. You can check it out at the bottom of the page after the review.

Jeffrey (Nikolaj Coster-Waldau) and his company are in financial ruin, causing him to go on a shooting rampage, the details of which we here over the radio from an open car, while Jeffrey rushes around his house to gather his two girls together, Victoria and Lilly.

Now speeding down a snowy road, the young siblings are sat in the back of the car, distraught . Victoria cries out for her father to slow down, only to get a harsh reply of "SHUT UP!" which in turn causes Jeffrey to lose control of the car, spinning them all of the road.

They all come round in the crashed car, now stuck in the middle of a forest. Jeffrey drags his children through the woods where they find an abandoned house. After getting the fire going to keep warm, Victoria realises they are not alone. Before the father commits an unimaginable act, he is snatched away by the unseen force. Victoria and Lilly are left alone to face what lies in the darkness.

Five years later and the girls are still missing, but Jeffrey's brother Lucas (also played by Nikolaj Coster-Waldau) is spending every penny he makes on the continued search for his nieces. And finally it pays off. The sisters are found in the very same house in the woods, although they now seem to be completely feral!

After a battle in court against their aunt, Jean Podolski (Jane Moffat), over the custody of Victoria (Megan Charpentier) and Lilly (Isabelle Nélisse), Lucas wins with the help of Dr. Dreyfuss (Daniel Kash). The deal is they get to live rent free in a home provided by the institute, that looked after and rehabilitated the two girls, so the Doctor can continue his work.

This is where it becomes apparent to Lucas and his girlfriend Annabel (Jessica Chastain) that Victoria and Lilly have something to hide and "Mama," who Victoria and Lilly refers to, makes it's presence felt. After Lucas is hospitalised in an accident, a reluctant Annabel is left to look after the siblings on her own. But the more time she spends with them, the closer they become. And this is when the trouble really starts.

In the meantime, along with digging a little deeper into the past, Dr. Dreyfuss continues his therapy with Victoria, only to find the unexplainable. Now "Mama" is showing what it's capable of, putting everyone in danger! 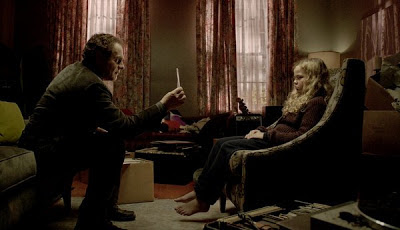 When you see this - "Presented by Guillermo del Toro," you should automatically expect quality. OK, so I wasn't a massive fan of Don't Be Afraid of the Dark (2010), but my blame for that lies with the director. The Orphanage and Julia's Eyes (review here) however, were great. That said, Mama surpasses all of these.

From the get go where thrown straight into the tension and are presented with a very unsettling scenario. Even the opening credits have a creep factor. The movie throughout is has that touch of style and flair that we have become accustomed to from Spanish horror, but in the English language. It transfers over perfectly.

This of course has to be credited to a beautifully crafted screenplay by Andrés and Barbara Muschietti and Neil Cross and also Andrés Muschietti's direction, which bought the best out of a very solid cast. Megan Charpentier and Isabelle Nélisse, the real stars of the piece, gave a glimpse of quality at such young ages that will surely flourish in years to come. I personally find kids in horror creepy as hell, but only when they play their role right, which the two children did.

This for me was very nearly a perfect film. It is a little predictable, but then, what film isn't these days? The only real weak point was the SFX. Some of the CGI looked a bit cartoony, while other times it was really effective. They didn't seem to find the right balance.

The movie is eerie and creepy pretty much from start to finish. It does provide some scares and I wouldn't call them cheap either. In certain scenes, you should be able to see what's coming, but because it's delivered so well, it will still make you feel on edge or even make you jump. This is all help by an equally unsettling and perfectly timed score along with some disturbing sound FX. The ending should have you twisted up too. You think it's going in one direction, then it heads in the opposite, only to find it's original path, but not quite. That should make sense if you've seen it! It might even have you shedding a tear. Mama is a must watch for any horror fan.

Check out the trailer and the short film below...