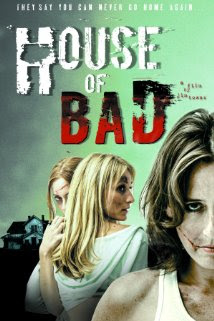 After a passionate night of sex, Sirah (Sadie Katz) is hauling ass away from Tommy (Clint Jung). In her hands is a suitcase full of drugs. She headed to meet her two sisters, Teig (Heather L. Tyler) and Lily (Cheryl Sands), who are waiting at the getaway vehicle.

The siblings drive to an old deserted house that they grew up in, which also has a bad history and worse memories! As the girls hide out there, the scars of their past start to haunt them.

The longer they stay in the house the worse it becomes. Staying out of the reach and hiding from the drug dealer wasn't bad enough, but now they have to contend with more than just old memories.

With flash backs throughout the movie, we get to see what happened when the sisters were just children. The flash back scenes are more like extended subliminal images which work to great effect as they give us a slight glimpse into what happened without going into too much detail.

What we see in these flashes of imagery are bloody and brutal and a harrowing experience for anyone, let alone children.

Lily is the first one to feel, see and be affected by the house. These memories are now starting to manifest themselves both mentally and physically and the sisters begin to turn on one another. The house and what haunts it is slowly taking hold of the three women.

But it's Sirah that seems to be holding it together better than her other siblings. Teig and Lily are the ones that are losing the plot and putting them all in danger. What started out as a simple heist turns into a fight for, not just sanity, but also for their lives. Can they escape their own past as well as the history of the house?

Tyler, Katz, and Sands are completely the main focus of the piece and they carry the film together well. The performance from each actress is actually pretty solid for saying they're all relatively new comers to the feature film side of the industry. For me, Cheryl Sands gave the best performance though. She seemed to flow more naturally in her role.

Jim Towns did an excellent job of directing from his own script that was also contributed to by Scott Frazelle (Creepshow III - "Haunted Dog" segment). The score added a continued amount of unsettlement throughout.

Most of the horror comes by way of the flash back scenes, which, as I mentioned before gives a good amount of detail without being too long or too short. The simple SFX are used to great effect which keeps things nice and creepy. Now I do have to warn you, this movie is rather slow for the most part, as a lot of time is spent in the house. But don't let that put you off. It more than kept my attention due to the story and how the characters developed.

Fresh, sexy and unsettling, this supernatural thriller is a fine example of what the low budget indie scene has to offer. I'm looking forward to seeing what Jim Towns has to offer in the future.

Head here to check out the trailer - https://www.youtube.com/watch?v=zzudMBrjuIs