The story follows a group of students that make plans to get together one last time before they go there separate ways after summer vacation.

Joey (Rocky Petroziello), is suffering after the death of his mother. As if being bullied at school wasn't bad enough, he's also got an abusive father to deal with that blames him for his mother's death. So the party seems like a perfect escape. Before the festivities begin, the boys have a plan to scare the crap out of the girls.

As night falls, the group of teenagers are sat around an open fire, drinking beer and having fun. The only thing missing? A good ghost story to set up the prank.

You've guess it, the scary story ends with someone dressed as a clown jumping out of the darkness and scaring everyone. Although, it doesn't quite go as planned, in fact, it goes horribly wrong, resulting in death! Of course, the big bad jock has to take charge now as panic sets in with all involved. Do they go to the police or cover it up by burying the body and agree to take an oath of silence? With their young futures ahead of them and possibly facing jail, they agree to do the latter, even though the deceased is a friend.

OK, this isn't anything original by any means, but it does have a message of trust, betrayal and friendship. So, much in the same vain as I know What You Did Last Summer, we all know what happens next. A few months later, one by one, the people involved in the ill fated night start to go missing and end up dead. And in true slasher fashion, the killer stalks the kids with vengeful fury. 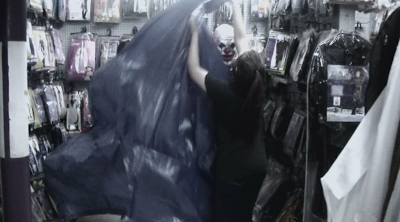 With it being such a low budget production, there's always going to be question about the quality. Which means the acting is never going to that great and more times than most, the acting is just awful. But in this case, it wasn't terrible and the main cast provided enough quality to keep my attention. The effects are cheap and cheerful, but they were also believable. The score provided an air of eeriness that you would expect from any decent slasher flick.

Adam Dunning is another one of those indie guys that write, direct and produce projects themselves. In this movie he also works editing, cinematography and make up. And I believe that his hard work has paid off. For a second time effort (his first being The Infected [2011]), he's definitely headed in the right direction. With the right financial backing in the production area, Dunning would be more than capable in delivering a stronger script and more refined direction.

I'm not going to give this movie a mark out 10. I'm simply going to say this...
We, as horror fans, should be supporting projects like what we have here. To give the little known indie guys a help in their endeavours as writer / directors. Let's face it, most of Hollywood's efforts are either remakes or sequels now-a-days. Which leaves room for the people like Adam Dunning to put their foot in the door. But it also takes the fans spread the word. So give this movie a go. It's not going to blow you away, but it is fun, gory and has a genuinely creepy clown. You never know, it just might surprise you!

For more info, head to the official facebook page here.
Posted by Mad Mike at 22:25