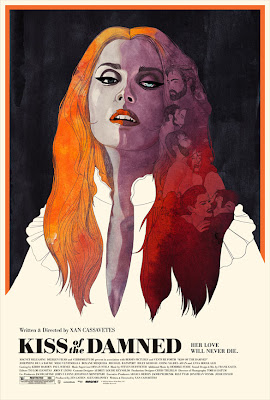 Being as the vampire sub-genre is my favourite, as soon as I saw the trailer for Kiss of the Damned I was excited! It looked like it had all the potential to be something special...

The film follows Djuna (Joséphine de La Baume), a lone vampire who lives in a secluded house owned by friend Xenia (Anna Mouglalis). The only other person who frequents the premises is the loyal housekeeper, a human of course, that keeps a watchful eye over things during the day.

While out returning some DVDs to the local rental store, Djuna spots a handsome stranger, Paolo (Milo Ventimiglia), but tries to avoid him. He follows her outside and they get talking. After going for a drink they end up back at Djuna's house, but she soon resists Paolo's advances for fear of what she might do to him.

Undeterred by this, Paolo continues to pursue the undead beauty. Eventually, she gives in to her animalistic passion.

Djuna reveals that she is a vampire and warns Paolo of the dangers, but again, this doesn't put him off and soon enough they are in the throws of sexual heat. One thing leads to another and she sinks her teeth into Paolo. What seemed to be just passion was actually love. Now a newborn vampire, Paolo is taught the tricks of the trade.

Their happy life together is soon interrupted by Djuna's sister Mimi (Roxane Mesquida). A bit of a rebel and a flare for breaking the rules, Mimi is making a go of playing it straight instead of feeding off and killing humans. So she's staying at the house till her own place is ready. This is where the trouble starts though. Mimi's actions cause a stir in the vampire community and a riff between siblings.

On the surface, Mimi looks and acts like a spoilt brat. But she's far from it. In fact, she's a master manipulator using her own sexual prowess for a hidden agenda. Now it's not just Djuna and Paolo's relationship that's in danger, but Xenia's reputation as a highly respected member of the vampire community. Will the passionate couple have their fairytale ending before Mimi ruins everything? Only time will tell...

The first thing that's instantly noticeable about this movie is the throw back feel to it. It pays homage to classic 60s/70s vampire/horror flicks. From the cinematography to the spellbinding score, everything just works in harmony to give us a modern vampire film with an old school feel that we've been missing out on for a very long time.

I'm sure your all thinking "what about the vampires, are they real vampires?!" Well, they don't sparkle, that's for sure! The vamps in this movie are portrayed as carnal beasts with sophistication and a twist of "eurotrash." Of course, this was helped by the great cast who played their roles with ease. Specially the two leading ladies, Joséphine de La Baume and Roxane Mesquida. Milo Ventimiglia, whom I've not seen in much since Heroes, was also solid.

Along with the spellbinding score, came a pretty damn cool soundtrack too. Again, every piece of music suited the scene perfectly. It made it seem like the characters had their own theme music at certain points. The costumes where worn with elegance and finesse, looking somewhat retro but still high fashion. Some of the cinematography and visuals are stunning, giving us a glimpse of what it would be and feel like to be a vampire. The SFX are simply effective with a nice touch of blood and gore when appropriate. The sex scenes are rather erotic, but manage to stay classy!

I'd go as far to say that this is one of the best 21st Century vampire flicks to date. I find it hard to believe that this is only the first feature, written and directed, by Xan Cassavetes. If this is the quality we can expect from her then bring it on, I look forward to more!


Kiss of the Damned is sexy, seductive, fierce and a true vampire film for true vampire fans. The movie is simply cool as fuck!
.