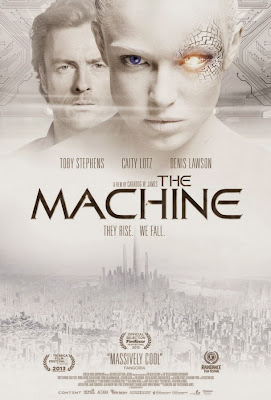 The Machine, is my third and final review from Mayhem Horror Film Festival.

Now, there is an to exception to me reviewing this movie as it's a Sci-Fi Thriller and not Horror. But I as it was part of the festival and I enjoyed it a great deal, I simply had to share it with you.

This British film is written and directed by Caradog W. James, who's previous work includes a handful of short films and the comedy feature Little White Lies. I was lucky enough to shake his hand and congratulate him on his film shortly after the screening!

The movie follows a scientist called Vincent (Toby Stephens). He works for the Ministry of Defence at a time where they are on the brink of a cold war weapons race with China. His job is to develop an advanced weapon using artificial intelligence. He's developed a brain chip that can be implanted into the brain of injured soldiers, but when a glitch manifests itself with deadly consequences Vincent enlists the help of A.I. expert Ava (Caity Lotz).

Under the watchful eyes of their boss Thomson (Denis Lawson) and his assistant Suri (Pooneh Hajimohammadi), Vincent and Ava set about creating the perfect android. During the process, the co-wokers become close and Vincent reveals that he's also using the MOD's funding to research ways to help cure his daughter's illness.

The end product is "The Machine" with full free thinking and learning capabilities. But it's not long before Thomson steps in and makes some controversial decisions that leads to everything Vincent has worked hard for to crumble around him. 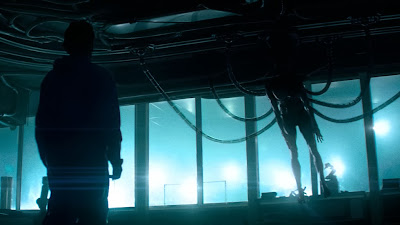 The film is very atmospheric from start to finish. The cold blue lighting and soft focus lense work helps create a very solemn mood that all the best Sci-Fi flicks have and the cinematography is absolutely spectacular. My eyes were constantly glued to the screen!

It wasn't just the visuals that were great, the script was too. It was of the highest standard and didn't just fill our heads with technical jargon and unbelievable plotlines. The threat of an arms race, nations rising to power through technological advances is a very real thing in the world we live in today. The characters are so well written, that each of them can be related to. It also gives you a very real feeling that this isn't actually that far into the future. The firearms used are on par with today's advanced guns, the lead actors drive newer cars that we see on the roads today and a lot of the gadgets used could be the next generation tablet/iPad type technology.

The cast was a varied collective, but performed brilliantly together. Lawson played the main antagonist, displaying a mild but menacing demeanor. Stephens in the main role gave a great deal of depth to his performance. He was the angry scientist, the doting father and the warm caring friend. Hajimohammadi's role is worth a mention too, although not a great deal of screen time compared to the rest of the cast, she's delivers a creepy and an important performance. But it was Caity Lotz that stole the show! She's not just the sassy A.I. expert we see at the start of the film. She also plays the role of "The Machine" for reasons I won't give spoiler too. She's elegant, child like, formidable and deadly in the role and performed all her own stunts!

The direction was simply fantastic, for all of the above reason too. And even though the movie was made for under £1million the SFX/CGI is second to none. I honestly could not fault this film!


THOUGHT PROVOKING, HEART WARMING, DARK & DAUNTING. THIS IS ONE OF THE BEST SCIENCE FICTION FILMS YOU'LL EVER SEE!