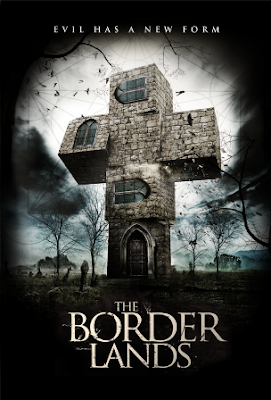 Here's my second review of the day and the third film shown on Saturday November 2nd as part of Mayhem Horror Film Festival.

The Borderlands is more indie horror goodness that comes to us from right here in the UK. I was lucky enough to meet producer Jennifer Handorf, the writer/director Elliot Goldner and the 2 lead actors Gordon Kennedy and Robin Hill at yesterday's event. They were pretty damn cool to say the least!

What we have here is a religious/supernatural found footage piece. Now before you start moaning saying "Not another one," this isn't your normal shaky cam job. This film brings quality from all angles.

Deacon (Gordon Kennedy) and Gray (Robin Hill) are part of a team of investigators employed by the Vatican. Gray is the "tech" in charge of the recording equipment and all kinds of electrical toys. Deacon is the religious believer and debunk expert with a bit of a dark past.

The two men set up temporary home in a cottage in the beautiful British country side while they await their team leader, a priest called Mark (Aidan McArdle). They've been sent to investigate claims of a miracle by local priest Father Crellick (Luke Neal), who has presented some video evidence of his own. But the team is there to determine whether or not a miracle is what really happened.

The location of the event in question is the local run down church. Father Crellick has a very small congregation and is in the process of refurbishing the building. The team set up cameras and sound recording equipment throughout the church and do a full sweep of the property and grounds.

They struggle to explain their findings and as time goes on Father Crellick's erratic behaviour causing more concern. With more digging into church records comes the discovery of something darker than what they had expected, which is when they call in Father Calvino (Patrick Godfrey) from Italy. Further investigation and research only brings to light some sinister history and along with that comes disturbing and life threatening events.

The first thing I noticed about the movie was the very natural acting from the talented cast. The two main leads delivered memorable performances from the very well written script. Hill plays the non-believer with ease and provides the comic relief to Kennedy's tense and solemn character. Their characters are at different ends of the spectrum, but arc together progressively throughout the film. And this is testament to the exceptional writing and direction by Elliot Goldner.

The only negative point I will raise is that it's a little predictable in places, but this is compensated by the real presence of tension. The simply practical effects, the sound FX and score helps create some genuine fights too. I don't jump easily and it's very rare that any new film has that effect on me, but this movie accomplished it, even if it was only once. The real pleasure I took away from it was the one feeling I love to hate getting from such a film.

That's the feeling of being "Freaked The Fuck Out" and this happened to me more than I care to admit. I get that chill up my spine that eventually moves to the back of my neck then through the top of my head ending up making my eyes misty with pressure. I don't like that feeling, but as far as watching horror goes, it's the ultimate scare to me. This has only ever happened to me twice before. The first time was when I watched the 1982 classic Poltergeist. I was 11 or 12 years old at the time! The second time I was hit with the feeling was watching Paranormal Activity when it first came out (Yes, I can hear some of you sneering!).

The movie doesn't just simply give us scares and jumps. It also causes you to think about your own believe system, whether or not you believe in one almighty god or have more traditional believes, like myself, that are routed in paganism.

This is Goldner's first feature film and he accomplished something that most seasoned of directors completely fail on! Even the camera work is smooth compared to a lot of other found footage flicks. Goldner scares us with what we can't or don't see rather than splashing our eyes with cheap thrills. To me, all of this is a sign of greatness!

THOUGHT PROVOKING AND FRIGHTENING, THE BORDERLANDS IS THE MOST IMPORTANT FOUND FOOTAGE HORROR FILM SINCE THE BLAIR WITCH PROJECT. IT'S SIMPLY THAT GOOD!


Unfortunately the film is so fresh there isn't a trailer yet! So I'll just treat you to a photo...