AND BY ALL THAT IS UNHOLY, WHAT A FANTASTIC START TO THE DAY!

The story follows young Roscoe who lives in what appears to be a quiet and peaceful community. He has a keen eye for art, but all of his drawings include what looks like a frightening demon, the same demon appears to him on a regular basis.

One fateful night, upon discovering the death of his parents, the boy runs into the woods. He is now being lead by the demon in his drawings to a certain place. This place is a magic portal to another dimension! Roscoe slides down into a hole to face the unknown.

Cut to "YEARS LATER" and we see a grown man with long hair and, if I do say so myself, a very impressive beard, crawling out of the ground.

Roscoe (James Sizemore), now a fully grown adult is back in the mortal world, but with his reappearance comes mayhem and carnage! He's followed by some vengeful demons, ones that only want death and destruction! They go about influencing the people of the community to their biding. Roscoe is the only person that can stop them.

Through flash back scenes we get a glimpse at what happened to him on the other side of the portal. The demon of his drawings, Dimwos (John Chatham), has raised Roscoe, taught him powerful magic and many secrets. But all was not peaches and cream! When Roscoe discovers a certain secret, it leads to his escape and the release of the very same demons that now threaten the world around him.

Reuniting with childhood friend Eva (Ashleigh Jo Sizemore), they must face these forces of evil together and save their community by destroying the evil that has been unleashed. 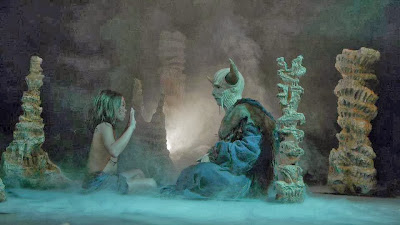 Pagans, demons, zombies and a hero with a most manly beard, what more could you want in a film?! Well, how about a boastful amount of practical FX? Because that's exactly what we get from this horror indie goodness! From start to finish the movie has a throw back feel it, from what I felt the 60s/70s with 80s style FX and gore. It's bloody good fun too with some real laugh out loud moments!

Made on a low budget, the film was shot on the weekends over a two year period with a volunteer crew and cast. But this doesn't hinder what we see on screen. In fact, it adds to the realness of what we see and hear. The heavily back light lit and smoke filled scenes are just simply inspiring to look at. The make up FX, all done by Sizemore himself I might add, are so creative that they put some CGI monsters to shame! This was all added to by the striking score of fearful tones and heavy sounding folk rock.

The script was kept simply which was actually a great thing. Don't take that the wrong way, the acting was decent. There was prolonged scenes of no dialogue, which is where the score and the visuals came in, again giving it that bygone ambiance of what felt like the British Hammer flicks of the 70s.

It's not a perfect film by any means, but that doesn't mean it has any weakness. It is what it is. An indie horror made by a very passionate film maker. I loved it when you get the chance, WATCH IT. And this why...


THE DEMON'S ROOK IS AN OVERDOSE OF ACID FUELED INSPIRED INDULGENCE OF BLOOD, GORE AND OUTRIGHT FUN FILLED HORROR CARNAGE BY A PURIST FILM MAKER!