As if October wasn't the best month anyway, my birthday and Halloween, it also marks the epic event that is Mayhem Film Festival which kicked off yesterday with the hypnotising live performance from The Duke St. Workshop. 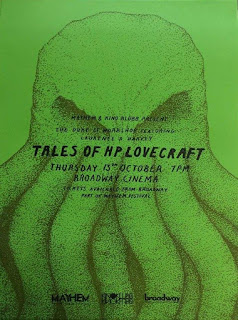 Presented by Nottingham's own Kino Klubb, the live music performance was delivered by The Duke St. Workshop with Laurence R. Harvey (The Human Centipede 2, The Editor, Banjo) reading from HP Lovercraft over the top of the music.

Whilst the music was being presented, hypnotic, translucent, neon images were projected on the screen. Along with Harvey's eerie yet inviting voice and a very John Carpenter Esq / 80s horror movie score, the visuals made for a rather trippy and mesmerising show. Something of which I remember for a very long time.

A truly one off experience, but you can get hold of the recording on vinyl and CD. They sold pretty quick last night, but I managed to get my hands on a beautiful purple LP.

The first film of the evening was the French cannibal film, Raw. 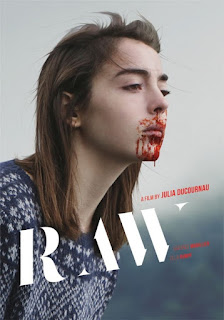 If you've read the reports about this film then you'll have read that audience members in Cannes film festival and Toronto International Film Festival had fainted etc. during it's showing.

I can safely say, as a long time horror, the film actually made me hungry! OK, not for human flesh of course. But all that aside, it was a very refreshing take on the cannibal sub-genre from writer / director Julia Ducournau.

The coming of age tale follows Justine (Garance Marillier) during her "rookie" week of veterinary school and her growing need to consume human flesh even though she's vegetarian. Along with the flesh eating, there's a couple of shocking moments, but there's also a few laughs along the way. Great acting and brilliantly written, Raw is definitely worth watching. 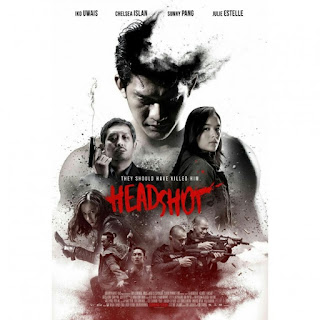 The final film of the evening was the UK premier of Kimo Stamboel & Timo Tjahjanto's Indonesian action thriller Headshot.

Starring The Raid's Iko Uwais you know straight away you're in for some ass kickery goodness! This time though Uwais shows us a bit more of his acting skills. That's not to say there's less action. Far from it. With some absolutely brutal and bloody fight scenes and stunning camera work that puts you right in the middle of every fight comes a story redemption and revenge.

Definitely one for the serious martial arts film fan.

That's it for day 1 of Mayhem. Keep your eye out for day 2's post shortly.

Mayhem Film Festival was founded in 2005 by filmmakers Steven Sheil and Chris Cooke. They screen the best in contemporary horror, science-ﬁction and cult cinema and television from around the world. Featuring premieres, previews, masterclasses, international special guest ﬁlmmakers, and unique live cinema events, the festival has developed a reputation as one of the strongest and most innovative genre festivals in the country. They are based at Broadway in Nottingham, one of the UK's leading independent cinemas and creative hubs.
Posted by Mad Mike at 11:12