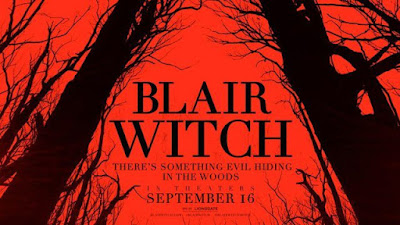 It seems like an eternity since I wrote a review. Life has been hectic to say the least and my blog has been on the back burner, so to speak. So, here's my first review since October 2015!

I've been to see Blair Witch tonight. It seems like this movie has just sprung out of nowhere with very little press and promotion, especially considering how big The Blair Witch Project was! Now, talking of the first film (I rewatched it last night), I didn't think a great deal of the first film, although I did like a couple of parts and thought the ending was good. However, I do appreciate how important the film was to the horror genre looking back. And, yes, I did like Book of Shadows!

This sequel is directed Adam Wingard and written by Simon Barrett. There's films so far have been a bit hit and miss for me. I didn't like You're Next, but i really enjoyed The Guest.

Blair Witch sees James (James Allen McCune) going on the trail for his sister Heather who disappeared in the first film. Being lazy, if you didn't know, here's the synopsis from IMDB...

"After discovering a video showing what he believes to be his sister's experiences in the demonic woods of the Blair Witch, James and a group of friends head to the forest in search of his lost sibling."

That's all the info you really need to know as regards the storyline.


There's no point going into more characters, names etc. etc. There will be a couple of spoilers in this review, but nothing that will ruin it for you. OK, my thoughts, not good I'm afraid. It's pretty much a rehash of the first film, but with a few extra characters thrown in. There's more going on, a lot quicker this time, and less subtle which I feel was a good point in The Blair Witch Project. It's got more tech like head cams, a helicopter drone video thing, walkie talkies, GPS gadgets and updated video equipment in general, so yes it's a found footage flick. But the whole thing felt like the rest of most modern sequels where everything is ramped up and supposedly bigger and better. Quite frankly it's filled with cheap jump scares that started to grate on me to be honest. Loud noises, even louder noise and more cheap thrills that one could shake a stick at!

A couple of spoilers here...

They all end up at the house at the end of the first film, which you see on the trailer anyway. A lot more time is spent in the house. You see the witch! Yes, all the things that you'd expect in what seems like this modern era of horror we're heading towards of watered down shit for kids who have too many feelings. There's nothing original, nothing scary, nothing worthy of any note about this film. Actually, I'm lying, I did like the thunder, lighting and rain sound effects. There, that's the only thing I found enjoyable. But then, I like the sound of thunder, lighting and rain anyway.


It actually became laughable towards the end, mainly due to the poor acting from the hysterical Lisa (Callie Hernandez) who blubbers more than Heather did, but at least that was believable. I don't know what more to say. Honestly, it seems like in this new era of political correctness, social justice warriors ruining everything for everyone, and the generation of movie goers (yes, the latest edition of fucking teenagers!) being all to too touchy feely, our once beautiful genre of horror is becoming (and has been for a few years now) more and more watered down as to not offend anyone. Plus, it's more apparent that the studios just want bums in seats to keep the profits as high as possible instead of making something note worthy. Seriously, there's only a handful of horror films out this year that I've actually enjoyed and 3 of those I saw at a horror film festival last year.

I stood looking at the huge Blair Witch poster in the cinema lobby after watching the film. Reading what other critics/reviewers had said about...


"One of the scariest movies ever made"
"A new beginning for Horror films"
"Chilling and intense, a truly terrifying cinematic experience"

NO! Don't believe the hype. Or maybe I'm just that much of a seasoned horror fan and/or too old (nearly 40) that it takes something seriously special to impress me. Don't get me wrong, I enjoyed Lights Out, it was fun. But there's been nothing for years that has genuinely frightened me or really disturbed me. Anyway, here's the official part...


BLAIR WITCH IS MODERN HORROR FOR MODERN FANS IN AN ERA OF DUMBED DOWN, CHEAP SCARES & NOTHING NEW FILM MAKING 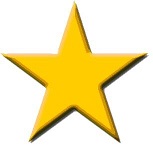