Day 2 of Mayhem started off with what I would call the weird and wonderful... 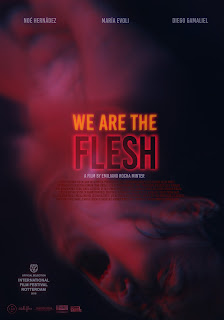 We Are the Flesh is a Mexican film written and directed by Emiliano Rocha Minter and is his first feature.

Straight from the Mayhem flyer:
"Wondering around a ruined city for years looking for food and shelter, two siblings discover an older man who promises to take care of them and, as they begin to create a womb like cave for him, a disturbing sexual relationship emerges."

More fantasy than horror, this distursing and shocking tale is extremely visceral. It's up front and in your face and never shies away. Besides the hard nature of the nudity (pun intended), the writing and acting stands out throughout the film and the very end is a rather nice touch to a film that seems too bleak to be real.

That said, the best way I could sum this up is what I said straight after watching the film...

"It was a load of nonsense, but very naughty. I quite liked it."

The following film was a complete change of pace. A UK feature called The Rezort. 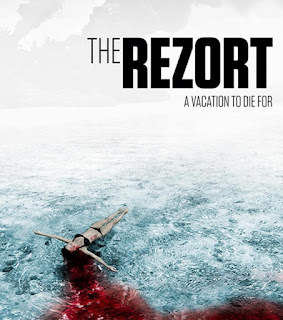 Part Zombie film, part political statement, the film manages to stay fun throughout. The concept is a refreshing change and actually the best thing about the movie. Set ten years after the initial outbreak, The Rezort is an island off the coast of Africa which is inhabited by Zombies. You pay for five star treatment in a luxurious hotel and get to shoot the walking dead, all done under the watchful eye trained experts. As you can imagine, things go awry, people die and truths are discovered.

Wasn't overly impressed with it, but I did enjoy it. Definitely worth a watch if you like you're Zombie films with a little more depth than outright action. 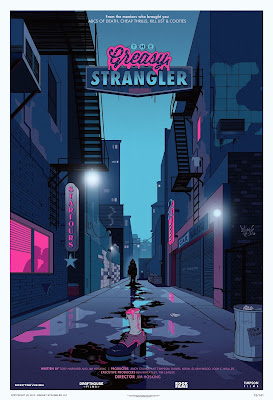 Up next was The Greasy Strangler, which has been doing the rounds at a lot of festivals this year.

This is a horror comedy that's completely over the top, but also pushes the boundary of bad taste.

Big Ronnie and his son Brayden run a Disco walking tour. When a woman takes the tour, it creates competition between father and son for her love. Throw an oily, strangling, murderer in the mix and let the chaos ensue.

The was funny in parts, offensive and also irritating. For the most part, it felt a little bit Monty Python mixed with The League of Gentlemen and Vic Reeves and Bob Mortimer, but less funny and more annoying. Having said that, it's definitely worth a watch, but I feel it's nothing really original.

The last film of the day was a classic from 1965. Mario Bava's Planet of the Vampires. 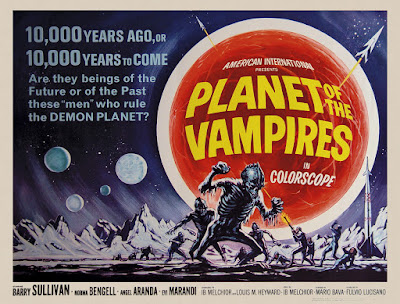 It was first time seeing this movie and yet another reason why I love Mayhem so much. Getting to watch old movies, restored, remastered (under the supervision of Nicolas Winding Refn; Drive, The Neon Demon) and on the big screen is an absolute treat. And especially with this one as I love Mario Bava films.

After landing on a mysterious planet, a team of astronauts begin to turn on each other, swayed by the uncertain influence of the planet and its strange inhabitants.

This Sci-Fi Horror is super stylistic, super eerie and super campy. It looked beautiful on the big screen and I enjoyed it very much. The film is well known for influencing (I've also heard the term "ripped off" a few times) Ridley Scott's Alien (a favourite of mine also) and you can certainly tell it was heavily influenced by Bava's film.


Mayhem Film Festival was founded in 2005 by filmmakers Steven Sheil and Chris Cooke. They screen the best in contemporary horror, science-ﬁction and cult cinema and television from around the world. Featuring premieres, previews, masterclasses, international special guest ﬁlmmakers, and unique live cinema events, the festival has developed a reputation as one of the strongest and most innovative genre festivals in the country. They are based at Broadway in Nottingham, one of the UK's leading independent cinemas and creative hubs.
Posted by Mad Mike at 22:47