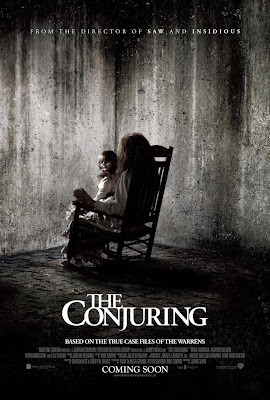 The Conjuring is directed by James Wan. If you didn't know, he also directed Saw (2004), the very underrated Dead Silence (2007), Insidious (2010) and of course the upcoming Insidious Chapter 2 (due September 13th 2013). With some very solid films under his belt, I was expecting something equally as good. I was not disappointed!

Let's start with the facts. The movie is based on Ed and Lorraine Warren, as played by Patrick Wilson and Vera Farmiga. The married couple were paranormal investigators and in 1952 founded the New England Society for Psychic Research (FIND OUT MORE HERE).

Now I've been doing a little research into this, since it's "based on a true story" and I found some interesting stuff (FIND OUT MORE HERE)!

"The Conjuring IS based on a true story...our story. However, the film is not based on my trilogy House of Darkness House of Light. It is, instead, based upon the case files of Ed & Lorraine Warren...There are liberties taken and a few discrepancies but overall, it is what it claims to be — based on a true story, believe it or not." - Andrea Perron (in a Letter to Horror-Movies.ca, June 2013)

The opening scene sees the Warrens investigating a disturbance involving a rather sinister looking doll that is quickly dealt with. They are showing the recorded film as part of a lecture. We then get introduced to the Perron family as they are moving into their new home. A big creepy as hell old house!

As most haunting movies go, strange things start to happen around the house causing worry for Carolyn and Roger. They call upon the Warrens for help and with their team they set about investigating, recording and capturing evidence of a paranormal manifestation among other things. Ed and Lorraine delve deeper into the past of the house with disturbing results.

This means one thing, everything goes from bad to worse for all involved! It's not just the Perron family at risk, but also the Warren's family. It fast becomes a race against time to save their loved ones.


It's no surprise that this film topped the US box office in it's opening weekend. James Wan really pulled off something special from a modest script written by Chad Hayes and Carey Hayes, who, in previous years also co-wrote together Whiteout (2009), The Reaping (2007) and House of Wax (2005).

It's been a very long time since I sat in the cinema and heard such loud and frightening screams from audience members. In fact, it's been that long that I can't remember when or what was showing. Don't let this fool you though, they were the screams of non horror fans. The scenes in question, to us horror fans, are a little on the cheap side, but don't let that put you off. The tension throughout is real, along with the fact that Wan gets you looking one way and hitting you the other. It's been a while since I've seen a great use of miss-direction in the genre.

And with talent like Patrick Wilson and Vera Farmiga, who are both solid in everything I've seen them in, it was easy to relate or have a connection with the characters. Ron Livingston and Lili Taylor play the loving parents well, which is supported by the five young cast to good effect. John Brotherton as Brad provided some comedy moments to lighten the mood a little.

All this added with the good special and practical effects made a very enjoyable watch, even if I was freaked out quite a lot of the time. Stay during the end credits as there is a few pictures of the real Warrens and the Perron family. 1 hour and 52 minutes might sound like a little too long for a horror flick, but I didn't notice because I got into the film so much. Again, this is testament to the great story telling. I highly recommend watching The Conjuring as it's easily one of the best horror movies of the year.


WITH LOTS OF EDGE OF THE SEAT TENSION AND FRIGHTS, THIS FILM WILL PUNCH YOU IN THE FACE AND STILL LEAVE YOU WITH A FEEL GOOD FACTOR!