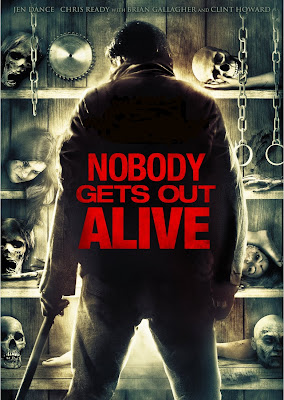 There's no real surprise that this went straight to DVD, even if it is a first indie flick. It's a simple story, one that has been used so many times before, but with greater effect.

A bunch of stupid people set about going on an alcohol fuelled weekend of camping in the woods. The urban legend of these woods are of Hunter Isth (Brian Gallagher), who's daughter was ran over by a drunk driver who previously attended a party in the very same woods over ten years ago. So naturally, as any good father would do, every year on the date of his daughter's death he stalks the woods and those who are in it that are drinking, having sex and doing drugs.

The group of young adults are a mixed bunch that includes two couples, the "troubled girl," the "weird guy" and the "nice guy." Names are not even worth mentioning as there's no real character development!

The writing and direction was simply that poor. If such an unoriginal idea is reproduced, then there has to be something special added. There was NOT in this case. The kill scenes and practical FX are decent, however, they are outweighed by the complete predictability of the whole shenanigans. The acting was mediocre to poor which just made things worse. In an attempt to add a bit of emotional content, there's a whole scene, that starts off with the lame question of "Why are you doing this?" that quickly lead to me thinking "I really don't give a damn." And to be honest, I actually laughed my way through most of it.


When I say laughed, it wasn't because it was a fun horror film. It was because if I didn't laugh I would hurt myself for watching such crap! It's not scary, it won't make you jump and it won't put you on the edge of your seat. The only real positive I took from it was the score, which was actually really good. Unfortunately even with such a score, everything else let it down and mainly due to the FACT that it was so god damn predictable! It's films like this that give the genre a bad name in my humble opinion.

True horror fans, don't waste your time! The occasional horror flick viewer might find it a little better, but not much. The last thing I'll say is that at the very end of the credits there is a scene that might very well imply there might be a sequel. If there is, I really hope the writer/director Jason Christopher learns from his mistakes.

If you must, check out the trailer below...