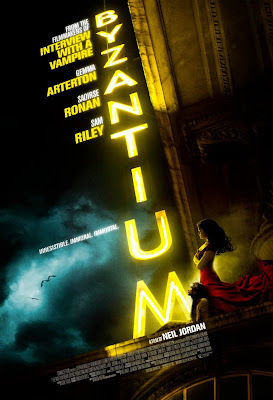 As far as Vampire films go, Interview with the Vampire is still one of my favourite movies. So when I first heard that Neil Jordan was returning to the sub-genre to direct Byzantium, I was that little bit more excited about it. Jordan also directed The Company of Wolves (1984), The Crying Game (1992) and  Michael Collins (1996) among other films, so we know we're going to get quality.

Don't head into this movie thinking it will be just another generic vamp flick with lots of fangs and blood. This is a horror / drama. I'd also like say that it has one of the most stunning movie posters I've seen!

The story follows Eleanor (Saoirse Ronan) and Clara (Gemma Arterton). They live from day to day with Clara doing what she has to, to earn money to support them both. When someone from Clara's past turns up, Werner (Thure Lindhardt), she puts them both in a compromising position and the two girls have to flee to another location.

They hit a seaside town, somewhere that Eleanor believes they have been before. Straight away, Clara does what she does best, making money and looking for a place to stay. In the meantime Eleanor meets Frank (Caleb Landry Jones), which turns into a friendship. Clara has now found a place stay with Noel (Daniel Mays), in his run down hotel.

Clara works her magic and turns the hotel into a thriving business, with a difference, and Eleanor attends the local school with Frank. Everyday, Eleanor writes down her tragic story of immortality and trows it away each time. But when she decides to write the same story, claiming she is a 200 year old vampire, and give it to her friend frank, it back fires on her as Frank passes it on to their teacher, who in turn becomes concerned that Eleanor has a problem since she insists that what she wrote is the truth.

This all leads to Clara having to clean up the mess Eleanor has made, in turn making more of a mess herself. Now the attention of the authorities has been drawn as well as someone else from Clara's past. Past events are starting to haunt Eleanor and Clara even more than before, threatening to separate the them from each other. Will they get the happy ending they both earnestly and secretly crave for or will death be their future?

The big difference between this film and other vampire films is the mythos itself. It has very original origin story and as for the feeding, the normal set of tools are not used, but the thirst for blood is still the same! With some decent practical FX, the flow of blood should keep vampire and horror fans happy.

The story itself is extremely well written by Moira Buffini and with Jordan's direction, it's an excellent film that the seasoned non horror movie buff will appreciate too. Jordan's vision fills the screen and the movie does have a similar feeling tone as Interview with the Vampire, without as much action and more drama though.

The film flashes back and forth from the past to the present, answering all the questions that arise in your head throughout the proceedings. This makes you get more involved and connected to each character.

It's a beautifully crafted movie full of emotional content. From the dreary looking location to the contrasting colourful lights all within the seaside town, Saoirse Ronan and Gemma Arterton bring the whole thing to life with great performances. The supporting cast is full of quality too, but it's Ronan, along with Caleb Landry Jones that steal the show.


WITH SOME STUNNING CINEMATOGRAPHY AND OUTSTANDING PERFORMANCES, BYZANTIUM APPEALS TO, NOT JUST VAMPIRE FANS, BUT FILM ENTHUSIASTS IN GENERAL.