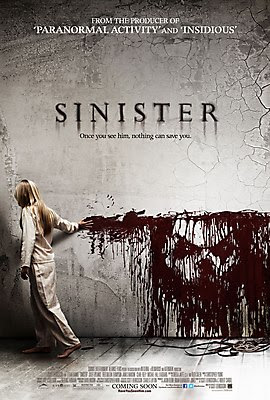 Friday. Money in the bank. Time - 12:45pm. Check the local cinema for times. First screening for Sinister - 1:30pm, screen 2. I'm there by 1:10pm and as it turned out I was the only person to see the film at that time. Awesome, the whole theatre to myself!

Ellison Oswalt (Ethan Hawke) is a struggling true crime writer who hasn't had a top selling book for over ten years and has moved his family around during that time in search of another story that will give him a shot at the fame and fortune once again.

His wife Tracy (Juliet Rylance), son Trevor (Michael Hall D'Addario) and daughter Ashley (Clare Foley) are moving into their new home while being watched by the local law enforcement. Ellison's last two books didn't go down well with the police and the local Sheriff's office know why the Oswalt family are moving in.

Ellison has a habit of moving into homes that are a few doors down from where the crime he is investigating has taken place. But this time, he gone that little bit closer and moved into the house where murders had taken place and a little girl has gone missing. The Sheriff (Fred Dalton Thompson) politely lets Ellison know that he's not welcome in town!

As soon as they are in the house, an eerie overtone is set. This is literally between five and ten minutes in! There's no long build here like a lot of horror movies suffer from, we're thrown straight into the deep end, as is Ellison with the discovery of a box in the attic that contains 8mm reel footage and a projector. So instead of hitting the hay with Tracy, he stays up to watch the footage.

There's a number of reels and they all show gruesome murders. Each is a family being killed, each in there own sick way. After examining the films closer he notices a strange figure, the same figure, in each murder reel. This is when things start to happen. Trevor starts having night terrors and Ellison starts to hear noises coming from the attic. He checks out the attic only to fall through the floor onto the hallway below.

After receiving medical attention and the aid of a local Deputy, Ellison befriends the Deputy and recruits him to help with the investigation. Deputy So and So (James Ransone), yes that is what Ellison calls him, ends up gathering some pretty damn good information and along with the help of Professor Jonas (Vincent D'Onofrio) from the local university, Ellison soon realises that all the families in the footage are linked and he has taken on more than he can handle as it's not just effecting him, but effecting his wife and kids. In an effort to find the truth about a real crime, an ancient supernatural evil is now at play and he may be too late to stop it.

Let's get the negative side out of the way first. It was predictable in parts, especially the ending. But I was willing to over look this as evrything else was fantastic.

I was freaked out at certain points and a couple of times it did actually make me jump. Did the fact I was sat in an empty theatre add to that? Yes, but don't let that fool you, this is genuinely scary and I'm rarely made to jump while watching films due to the fact I watch so much horror. They're not just cheap scares either because they're backed up by everything else that happens and I know that this film will stay in my head for a few days to come!

What you see on screen, the SFX, the acting, the content of the found footage, is all made more effective by the truly frightening score. Ethan Hawke's performance is outstanding and even the light comedic act from James Ransone gets serious the more we see him. In fact, I can't fault anyone in this movie.

Scott Derrickson (The Exorcism of Emily Rose) directed his own and C. Robert Cargill's excellent screenplay superbly. And credit has to be given to producer Jason Blum, as the Paranormal Activity franchise and Insidious made some serious bank at the box office and I'm sure Sinister will too.

This isn't just your standard horror, it's so much more than just a horror movie. It's part found footage, part supernatural chiller, part crime thriller and it should keep you glued to the screen with anxiety. It surpassed my expectations and I had high hopes for it!

Sinister gets 9/10
Check out this TV spot trailer below...