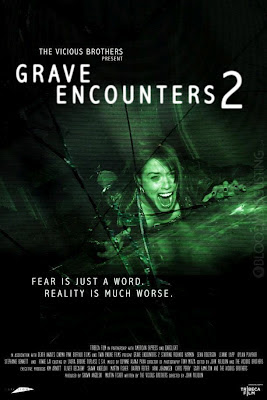 The much anticipated sequel to The Vicious Brothers' Grave Encounters has hit VOD in the US this week and will head to the big screen October 12th.

I loved the first film so of course I was looking forward to the second instalment. The sequel however is directed by John Poliquin and this is his first time directing a full length feature. Once again though, The Vicious Brothers have penned the script.

The very beginning of the movie, we see various vloggers giving there views on Grave Encounters, which was a horror phenomenon that many people believed was just a movie! But film student Alex Wright (Richard Harmon) is out to prove the fans wrong by making a his own documentary.

Alex travels around hoping to find and interview anyone that was involved with the filming and making of Grave Encounters. This isn't an easy task though, as most the cast are either dead or missing!

Undeterred by this, Alex manages to track down the producer, Jerry Hartfield (Ben Wilkinson) who concretes the idea that Grave Encounters was indeed more than just a movie. Spurred on by the information, Alex recruits the help of Tessa, Jared, Jennifer and Trevor (Stephanie Bennett, Howie Lai, Leanne Lapp, Dylan Playfair). They jump on a plane and make there way to the abandoned psychiatric hospital, where the movie Grave Encounters was filmed, to start their own investigation.

From the start of the film to the guys arriving at the psychiatric hospital takes around 40 minutes and what goes on between could quite possibly lose your attention, but stick with it as once they're inside, it all gets very manic, very fast!

This movie doesn't just rehash the events of the first film. It also dives deeper into the madness and takes it too the next level. When filming inside the abandoned building, the entities start causing trouble quicker and the crew of film makers start to bite the dust sooner. But towards the end of the movie it starts to take a turn in a direction you really don't expect, but this isn't necessarily a good thing! Not giving away too much here, but if you've seen Episode 50, you'll know what I mean. Suffice it to say, Grave Encounters 2 does NOT get to the point of silliness that is Episode 50! 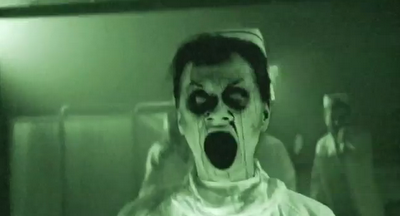 The movie has a few twists, turns and surprises and we get see a couple of new ghostly faces among the darkness of the psychiatric hospital. The SFX are just like what is used in the first film, so they're still simple yet effective.

The acting is what you'd expect, it's not bad, but it's not gonna win any Oscars. That said, Richard Harmon does do a decent job of carrying the movie. As for the story it's self, it is a little weak compared to the first instalment, although John Poliquin's direction is solid.

So, my overall thoughts, if you liked or loved Grave Encounters then you'll like number 2. But it still isn't as good as the first film. As I said earlier, the first half an hour or so might not keep your attention and the ending is a little inconsistent with what we've seen and come to love from the initial story, but it still has that overtone of creepiness and some good old fashioned scares.