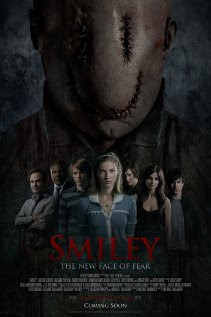 The movie opens with the classic slashers set up - Stacy (Nikki Limo), a baby sitter, is waiting for young Mary's father to come home from work. In the mean time, while sat in front of a laptop, Mary (Darrien Skylar) strikes up a conversation with Stacy about Internet chat rooms and the urban legend of "Smiley."

Legend says Smiley can be summoned through the Internet by typing "I did it for the lulz" three times on a chat room. Later that night, when Stacy is back home after the baby sitting gig, she goes on line to check out the chat rooms.

She gets talking to a guy and it doesn't take long before he gets aggressive with the comments he posts. Stacy receives the dreaded message from the guy, "I did it for the lulz" three times.

This was a great start to the proceedings as it had a real old school slasher feel to it and hopefully setting the tone for the rest of the film to follow suit.

We're now introduced to Ashley (Caitlin Gerard) as her dad (Billy St. John) is helping her move into a house near the collage Ashley is starting at. Already living in the house is Proxy (Melanie Papalia). Ashley is quite a shy timid girl, who is also still in recovery from the loss of her mother, while Proxy is a bit of a party girl. So to make Ashley welcome Proxy suggest she tags along to party.

At the party, the alcohol is flowing and people are having a great time. Ashley is introduced to Zane (Andrew James Allen) as well as some of his friends, one of which is watching a video on his laptop. The video is of someone getting murdered by the demented serial killer Smiley and in turn she is told about the urban legend. The fragile Ashley is freaked out by what she's just seen and been told, but at the same time it also intrigues her.

Later that night, back at home, both the girls decide to troll the chat rooms. This leads to one thing, after choosing an appropriate looking person they start up a conversation and inevitably Ashley types and sends the "I did it for the lulz" three times!


What happens next throughout the film is a bit up and down. It lacked a lot of tension that should have been created in between the kill scenes. However, this is made up for, although not in bucket loads, by Caitlin Gerard performance. As Ashley delves deeper into the urban legend, Proxy becomes more of a cynic and now Ashley can't decide whether she is losing her mind or becoming Smiley's next victim. So she seeks the help of a new friend Binder (Shane Dawson), psychiatrist Dr. Jenkins (Liza Weil), Officer Diamond (Keith David) and collage tutor Professor Clayton (Roger Bart), who gives the best performance in the film by the way. But in the end she realises that she can only depend upon herself!

This film had so much potential, but didn't quite hit the mark. It could have been this generations Scream and it did remind me of it a little. Using today's modern technology with how big the worldwide web has gotten was a fantastic story. I feel that director Michael J. Gallagher didn't make the most of the script he co-wrote with Glasgow Phillips. The special SFX worked great, but the score also lacked that certain something.

Don't get me wrong, I still thought it was a pretty cool movie as the ending was brilliant and I think it's worth giving a go. I actually hope a sequel will be in the works soon!