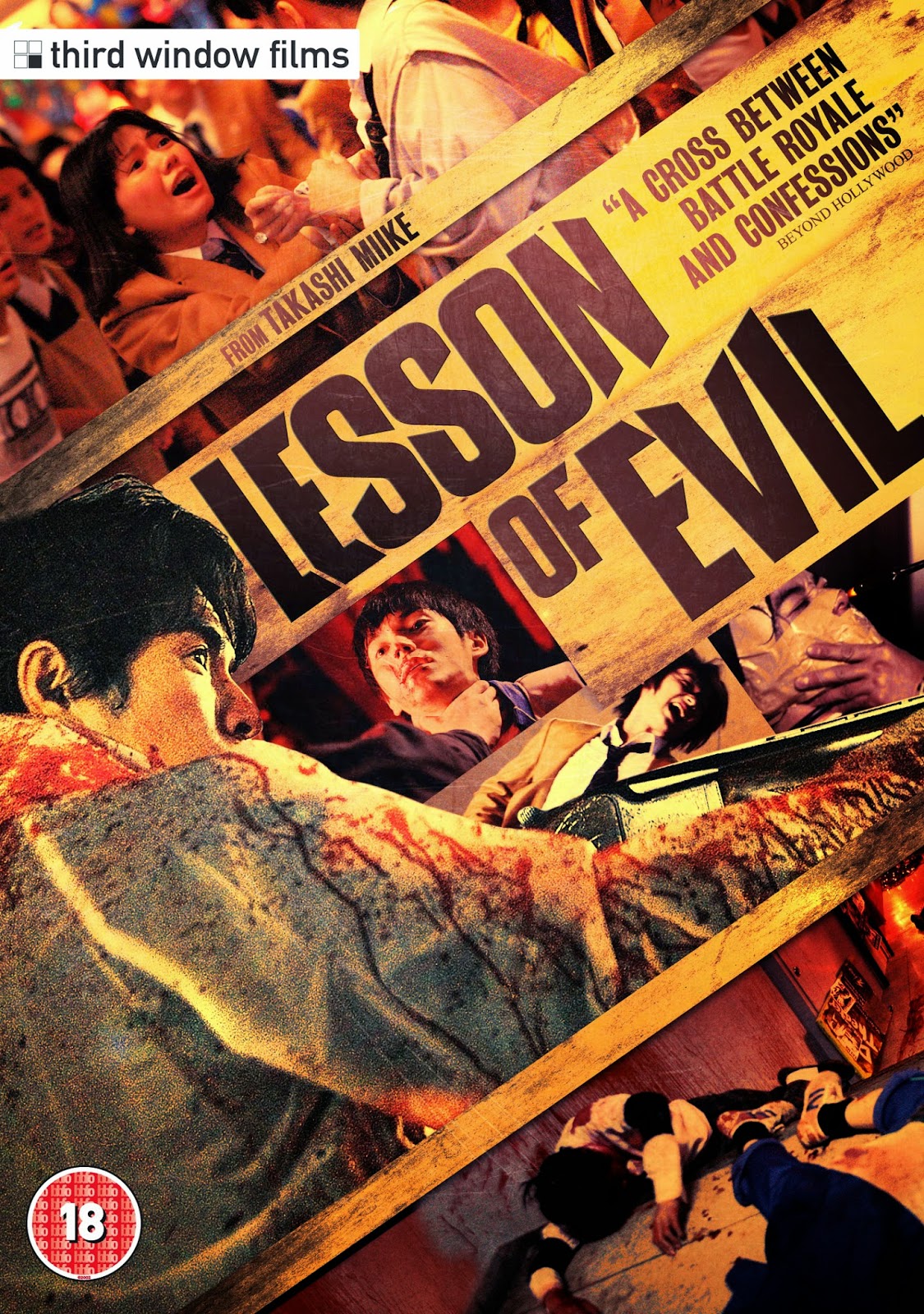 I have to admit, I've only seen a handful of Takashi Miike's films. But what I have seen have been excellent. So when I got the opportunity to get my hands a screener of the Lesson of Evil (based on the novel by Yûsuke Kishi) from Third Window Films I jumped on it.

Ichi the Killer, 13 Assassins and Audition are what I have seen. Audition was simply mesmerising and Lesson of Evil is no different.

Hideaki Itô plays the popular and extremely likeable Hasumi, a high school teacher that seems to have the kids best interests at heart. All he wants to do is crack down on the misbehaviour of exam cheating pupils and school bullies.

He has a real connection with the kids and puts it too good use, but it's not long before he steps over the line off the student / teacher relationship when he starts to manipulate not only child, but his fellow teachers.

After a student goes missing and a teacher has committed suicide, a small group of the children start to suspect something. However, Hasumi is still his charming self, despite visions / dreams of his dark past, and bonds an unhealthy relationship with Miya (Erina Mizuno) who's not as innocent as she looks.

Hideaki Itô is absolutely fantastic in the lead role. Even when he's up to no good he's still so damn likeable and attains an almost anti-hero status even though he's through and through a villain! By the end of the film I found myself kind of routing him. That's not to say I didn't feel for what the school children were going through towards the end.

The last 40 minutes or so is a, well, BLOODBATH would be the correct term for what happens as he stalks a group of kids round an otherwise empty school building. Showing no emotion, expect for a twisted smile, Hasumi goes from room to room with a high powered shotgun and relentlessly dishes out what he believes is justice. 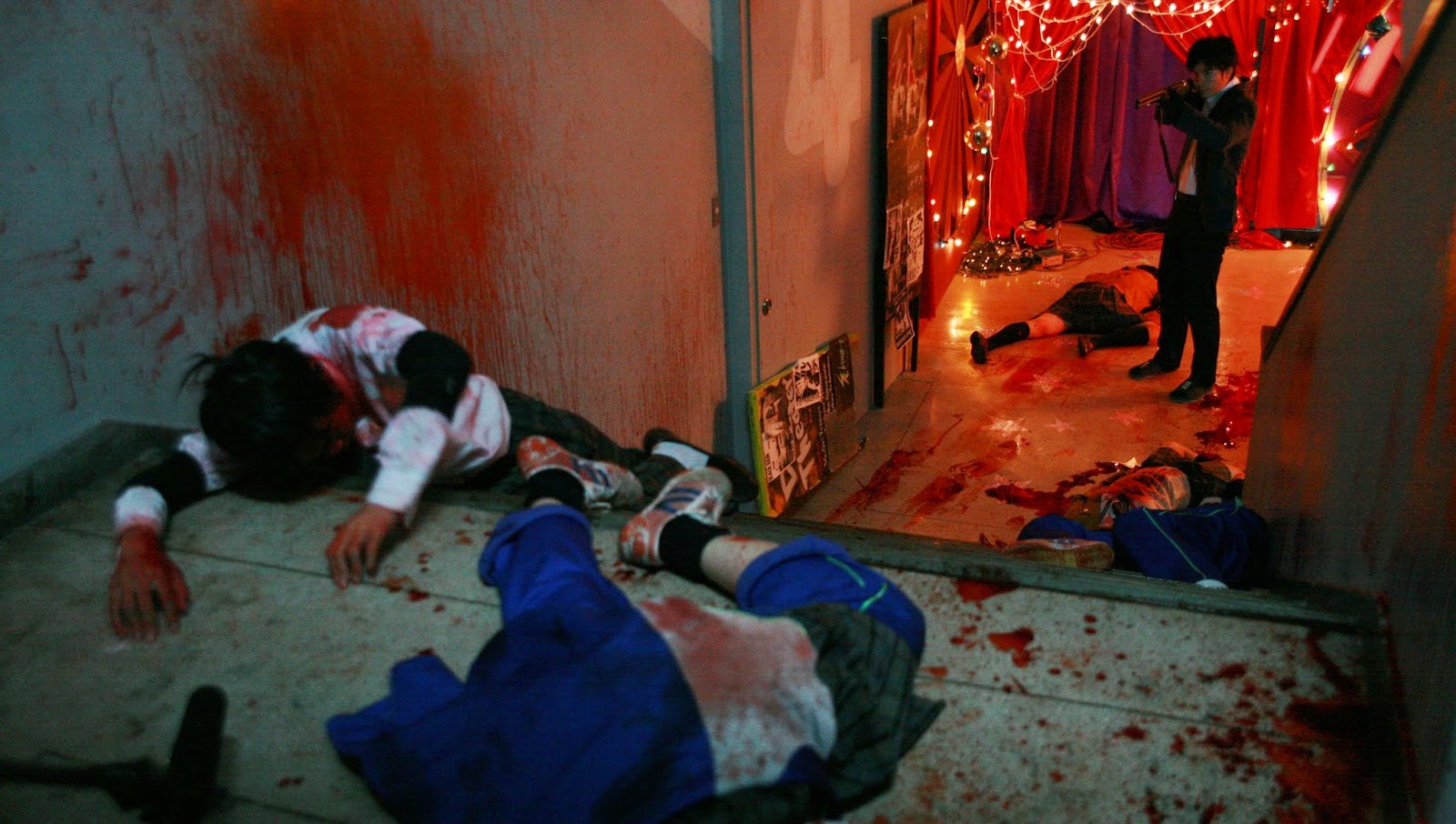 Much like Audition, this film has a slow buildup to the berserker of a finale. But this was no negative thing as I found myself enveloped in rich story telling from Takashi Miike, as both director and screenwriter, as we get to know the characters and their motivations. We also get a bit of back story so we can get into the mind of Hasumi. I've said it already, but I'll say it again, Hideaki Itô is fantastic as the charismatic teacher. His enthralling performance gave way to some great and very natural performances from the wealth of young talent throughout the movie. They gave a real sense of dread, making you empathise with them while being frighteningly pursued by an equally lovable killer!

I also found the mix of Norse mythology an interesting addition to an otherwise traditionally modern Japanese film. Hasumi would often be visited by two ravens which he believes to be Odin's pets, Huginn and Muninn. If that wasn't enough, the film also has the orignal "Mack the Knife" (Die Moritat von Mackie Messer) playing through it, which adds both a humorous and unsettling tone depending on the scene it's played in and sometimes even both. The song also changes as the film goes on, in to it's more modern jazz versions, which could symbolise Hasumi's growth from serial killer to mass murderer.

Takashi Miike's direction is able to put the viewer in a hypnotised state, not just in keeping your eyes glued to the screen, but also in stirring up a thought process in your mind's eye. This works for both simple dialogue scenes and disturbing scenes. With the addition of Lesson of Evil, Takashi Miike is fast becoming one of my favourite directors.


LESSON OF EVIL IS DISTURBINGLY ALLURING, DELIVERS ENGAGING PERFORMANCES & IS A PHENOMENAL PIECE OF FILM MAKING

My fellow UK/European residents can pre-order a copy of the UNCUT Bluray here and the DVD here, which both come with a 2 hour long Making Of featurette. It is available in the US, but as far as I'm aware it's not an uncut version. If I'm wrong about that then please correct me.