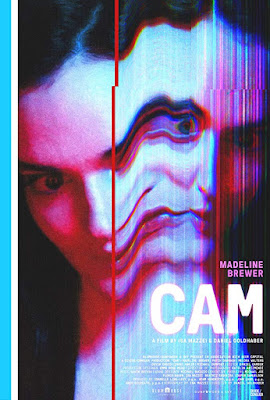 Cam girl Lola, real name Alice (Madeline Brewer), is trying to break into the top 50 girls on the site she broadcasts through by showing her tits and faking her own death. Adoring fans, or rather pathetic men, shower her in money for this. Till eventually her account is hacked and copied. The rest of the film is Alice trying to find out what the hell is going on.

This is yet another straight to Netflix film via Blumhouse, who seem to pump out any old shit nowadays (with the exception of a handful of movies). That's normally enough to put me of to be perfectly honest. Anyway, on this movie is first time director Daniel Goldhaber who's also credited with writing along side and first time writers Isa Mazzei and Isabelle Link-Levy. Their collective lack of experience shows heavily in this film.

The movie was interesting for the most part and had lots of potential as it could've gone down a really dark psychological path, but in the end it does nothing but glorify the fact you don't need talent to gain fame and fortune, which is so typical in this Internet age. There's even a massive plot hole.

Slight spoiler here, but trust me it makes no difference. As regards Lola's hacked account, within the movie (and apparently in real life too) it's suggested that these cam sites do this all the time to exploit more money by copying accounts and have them become virtual accounts. But how is this possible within the workings of this film? The fake account looks and sounds exactly like Lola/Alice and is broadcasting live, being able to interact and take requests from the men watching. She also appears with a dead girl (also a copied account) in a live show. There is no logic to this and the writers completely ignore it. The only real positive thing about this flick is Madeline Brewer's performance as the erotic performer as she pretty much holds up the whole thing on her own shoulders. 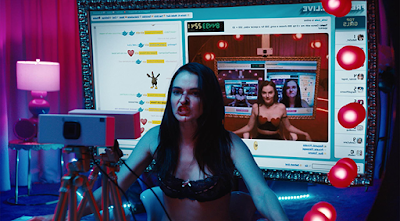 As I mentioned previously, this could've gone down a darker route with her possibly having a mental breakdown and developing a split personality or something along those lines. But no. There's no moral outcome to this seedy little film because once she regains access to her original account, deletes it, opens up a new account, she carries on as if nothing happened! Instead of covering the dangers of the Internet, the addiction it can lead to or the harm of leading a double life can have on ones self and those around you, it only celebrates how important it is to be popular. There is no moral to this film other than that.

As regards the 15 certificate, with the subject matter of the film alone, it should've been an 18 as you have to be 18 and own a credit card in order to access these sites. It's filled with nudity, sex toys being waved around and the lead actress riding a mechanical vibrator machine at one point. Maybe I'm getting old, but I certainly wouldn't sit and watch this film with my 15 year old son or daughter. 15 year old boys will probably spank off to this film and 15 year old girls will probably want to become cam girls after watching it. When the age of consent is 16 in the UK, how can a film like this be aimed at younger teenagers as it quite clearly is.