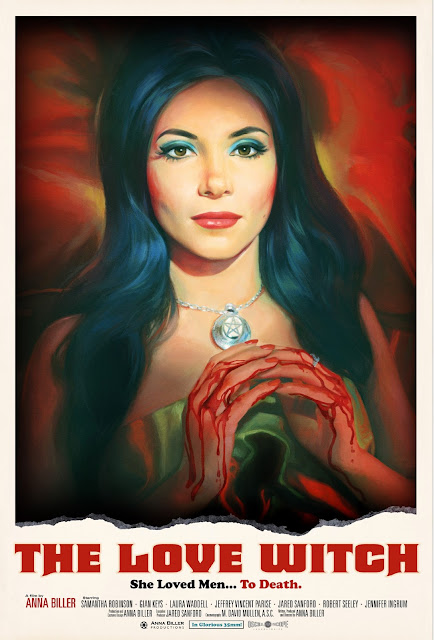 I finally got round to watching Anna Biller's The Love Witch, thanks to subscribing to Shudder UK recently. When I first saw the trailer, prior to the film's extensive festival run throughout 2016 and into 2017, I immediately knew that I had to see it. It seemed right up my street with its looks of 60s / 70s homage. I very nearly pre-ordered the bluray. But I'm glad I waited!

So the plot is simple. As said on IMDB... "A modern-day witch uses spells and magic to get men to fall in love with her." Sounds simple right? Well, yes and no. Here goes the easy bit...

The Love Witch, Elaine (Samantha Robinson), is escaping from a bad relationship and pretty much spends the movie going from one bad relationship to another. All due to the magic she is using. Sex magic! Men fall in love with her, become overwhelmed with her, and die. I'm going to add another quote from IMDB... The film "explores female fantasy and the repercussions of pathological narcissism." That's one way of looking at it I guess. Now, about 10 minutes into the film I paused it and read a couple of articles on the Internet and read up on the director and her, lets call it "agenda" regarding the film. I carried on watching. Carried on watching for the whole 2 hours. Even though I had enough at about an hour in.

OK, let's talk good points. The film was absolutely stunning to look at, with beautifully rich, vibrant colours and a good looking cast. Yes, it certainly had that homage feel to it. A little bit of 60s, but mainly 70s. It looked and felt like it could've been a lost Hammer film, recently restored to its full glory. Really nice set pieces and costumes. Even a touch of eurotashy type score. Even the acting, as its meant to be, nice and cheesy. They had that spot on, if indeed it was meant to be a homage or actually set in the 70s (I'll come back to that later). 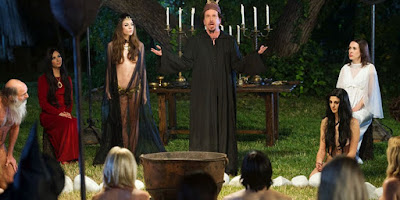 That's really all the positives I took away from it. You could say it's style over substance. Anna Biller certainly tried to add something of substance in there which just ended up being one long joke. A very long, 2 hour joke.

First of all, let's touch on the 70s vibe, remembering that I've only seen the one trailer (I don't watch many trailers or clips for the same film due to the amount of disappointed when watching the film) and read no other reviews, till that 10 minute mark anyway. My first gripe and probably the major one, with the way the movie looked and felt, if you're going to make a film so overpowered with a 60s/70s feel then set it in the 60s/70s. Seeing a very small amount of modern cars mixed in with all the old (the opening scene - the police car. Shortly after - the BMW pulling up outside the house) "classic" cars really throws off that feeling. OK, OK, I'm a mechanic by trade and I'm fussy about that sort of thing. It just didn't feel right at all though.

The other and only issue, a big one as a whole. The whole film was one big kick in the balls to men by a female director that's clearly one of these modern third-wave pseudo feminists (that's had a few bad experiences, but don't worry, her and her 10 cats will live happily ever after together)! Quite frankly it ruined the film turning it into, one big joke. It ended up being a 2 hour long feminist propaganda film. I think whoever wrote the "pathological narcissism" comment was right. It ended up being a mess, not deciding what it wanted to be. A Pagan Witch film? A Hammer film? A homage film? Set in present day film? A sexist film? A feminist's wet dream? So looking back, I see it as a spoof movie. Now, this is where I rant for a moment or two...

This sort of bollocks is simply not needed nor wanted in the genre. The whole "women in horror" thing we've seen over the past couple of years has gotten ridiculous this past year or so. And I'll tell you why. Horror has always been a heavily female represented genre, certainly from an acting point of view. It coined the phrase "Scream Queen" (apparently not good enough for Barbara Crampton even though it's all she's known for - CLICK HERE) and "Final Girl" where we've seen numerous examples over the decades of very strong female leads and characters. Leave that identity politics, leftist liberal lunacy and personal agenda shite for the pretentious crap we see nominated for Oscars nowadays. It gives female directors a bad name if you ask me. And these "women in horror" or I should say "#womeninhorror" seem to forget that female directors have been around for a long time. A quick search brings up this article straight away - CLICK HERE. As a horror fan, or even a film fan in general, I'm not interested in your gender as a director. I couldn't care less and it has no baring on the end product whether you've got a cock and balls or vagina between your legs. If it's a good film, from both a critical and a fan point of view, then the film and director is worth shouting about, male or female. The quality of your product will bring you the attention you need as a film maker.

But I digress, as I sometimes do. Final thoughts on The Love Witch?

IF YOU HAVE A BRAIN THAT FUNCTIONS ON LOGIC & COMMON SENSE, THEN THIS ISN'T THE FILM FOR YOU. IF YOU DO WATCH IT, TAKE IT WITH  A PINCH OF SALT & ENJOY IT FOR ITS WONDERFUL LOOK AND STYLE