Welcome to day 4 of Mayhem Film Festival! The one day when I managed to attend in full. Except for the live reading, but we'll get to that. Starting the day was a mockumentary from the land down under... 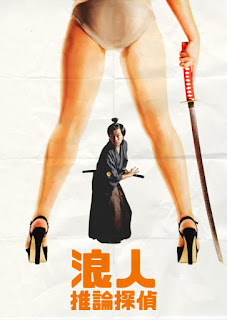 This story of a failed Japanese TV show is done in the style of the much beloved This is Spinal Tap (1984) and the absolutely brilliant (previously shown at Mayhem), What We Do in the Shadows (2014).

Bizarrely funny with lots of cheese thrown in, the downfall of Takashi Takamoto (Toshi Okuzaki) and his TV show is a surreal roller coast ride of self obsession, forbidden love, sexual harassment, betrayal & madness.

If you're a fan of the mockumentary style of film then you'll enjoy this. It's definitely worth a watch.


The second film of the day was something completely different... 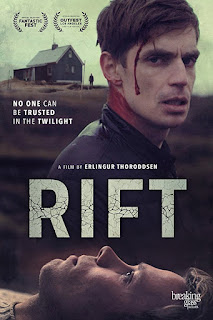 Starting off with a short video from the film's director, which was a nice touch as he couldn't be there, Rift (Rökkur - Original title, translated Twilight) takes place in the barren volcanic wilderness of Iceland.

Such a desolate setting was perfect for this slow burn psychological piece which follows Gunnar (Björn Stefánsson) and Einar (Sigurður Þór Óskarsson) as they hash out their past relationship in a cabin and the surrounding area. It's not long before they are interrupted by an unwanted visitor, that lurks in the dark.

Right, I had this film figured out inside the first 10 minutes. So that slow burn soon became a very, very, slow burn, to the point that I became a little bored and was hoping for some kind of mega twist ending. But that ending never came and I was right all along.
Scroll past the next section to avoid spoilers. I have made it very small so hopefully you'll miss it...

Besides that major flaw in story telling, it was beautifully shot with some stunning cinematography and both Stefánsson and Óskarsson's performances were excellent.

Up next was the annual "Flinterrogtion" hosted by Mayhem regular and Reprobate, David Flint. This year's test was a quick one, but with our 7 strong team we managed 3rd place in the incredibly hard horror quiz, which meant we won some goodies which included posters, Blu-rays and more.

The live reading I mentioned before was the 3rd program of the day. Hammer's lost film... 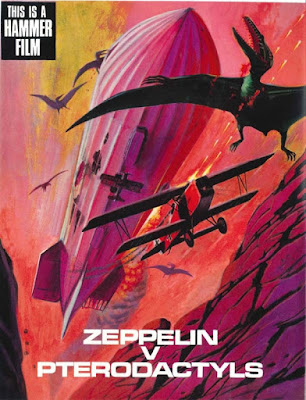 A few of us gave it a miss as we attended the live reading of THE UNQUENCHABLE THIRST OF DRACULA back in 2015. I enjoyed that, but it was a one time experience for me. So here's Realm of Horror's take on it...

"ZEPPLIN VS PTERODACTYLS, not a film, but a live stage reading of an unmade Hammer film. Scripted by festival co-director Steven Sheil, based on the original plot outline from the Hammer films archives, the story revolves around a crew of a Zepplin, on a rescue mission to find survivors from a ship wreck at one of the polar ice caps, only to discover a lost continent filled with Pterodactyls, wild beasts, strange natives and something else...

The story was highly reminiscent of "The Land that Time Forgot", "At the Earths Core" and various other old films about undiscovered lands, but with a Dr Who inspired sci-fi twist.

Narrated by Jonny Phillips (Titanic) with a full cast providing the various voices, it was rather like watching an Audio book or Radio Play being recorded and was Mayhem's second attempt at bringing an unmade Hammer film to life (the other being 2015s Unquenchable Thirst of Dracula) and proved to be hit with the audience. Needed more Pterodactyls though."

After something to eat and a couple of pints, we headed back to catch the Mayhem at Mayhem! 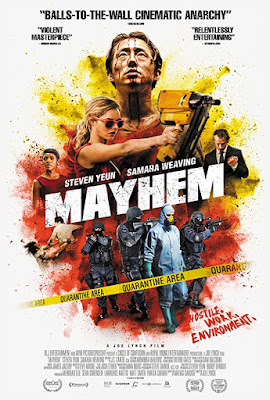 Starring The Walking Dead's Steven Yeun, this movie was insane, and again, very different from the first 2 films of the day.

Think the TV series The Office meets The Belko Experiment (2016) meets The Raid (2011) and you'll be pretty close to imagining what this movie is like.

The mind-twisting ID7 virus unleashes a scourge that drives the infected to extremes of uninhibited public fornication, shouting contests and, at worse case, rage fuelled fights and killing. Sounds like fun right?! Well that's what we got, an absolute shit load of fun, as this virus breaks out in an office complex. While everybody is loosing their mind, Derek (Yeun) and Melanie (Samara Weaving) are on a mission to get to the top floor to sort out some business with the big wigs of the company. Violence, brutality and blood, with a lot of laughs throughout. Let the Mayhem commence!

The last film of the day and of the festival was a debut feature for the director... 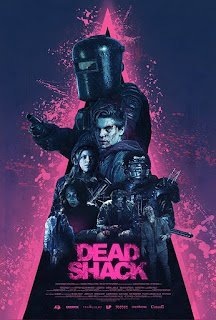 This had a similar feel to it as the previous film, a fun one.

A family of 4 and their son's best mate head to the woods for a vacation. But little do they know that their neighbour is hiding her children away, till they get hungry and it's feeding time!

This is a cool edition to the Zombie sub-genre that adds a little something different to what the sub-genre has been saturated with over the past 10 years.

Thanks once again to Steven Sheil, Chris Cooke and Meli for all their hard work and to Broadway Cinema for hosting the festival.
Posted by Mad Mike at 17:01