This was the UK premier of the possession horror comedy and unfortunately I had to miss this one. It received a lot of praise from the Mayhem audience Here a quote from a friend's blog that was there...

"I have to admit I wasn't really expecting much but it blew me away. It was a perfect start to the Sunday." Johnny's Cult Films

The second film out of the 4 on Sunday came out of Japan. Kiyoshi Kurosawa's (Cure, Pulse) aptly named film, Creepy. 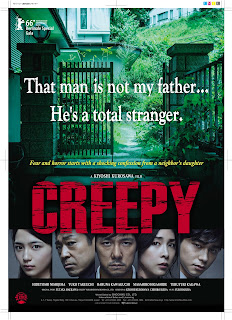 Kurosawa returns to J-Horror territory with this very unsettling and nerve wracking film that begs the question "do you really know who your neighbours are?"

Takakura (Hidetoshi Nishijima), an ex cop turned criminal psychologist, receives a visit from an old colleague concerning a missing person case. Even with the distraction of his teaching job and settling into his new home with his wife, the investigation into the missing person case takes Takakura onto a journey that leads him right back to his own street and onto the doorstep of his Creepy neighbour Nishino.

The performance from Teruyuki Kagawa as Nishino is simple fantastic. The film is well written and could've taken a couple of turns in the final act. Thinking back, the two choices that popped into my head right at the end, either one of them would've work just as well as each other.

The third film, and in my top three of the festival, was I Am Not a Serial Killer. 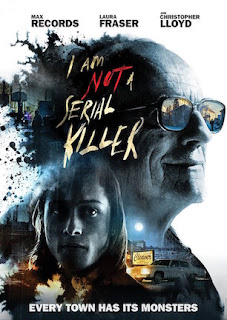 Director Billy O'Brien was in attendance for this showing and did a Q&A afterwards to.

The film stars the young excellent up and coming actor Max Records as a troubled teen with homicidal tendencies and movie veteran Christopher Lloyd as the friendly wise old man. The pair play so well on screen together in this brilliantly crafted film.

As a number of murders break out in the small Midwestern town, people are pointing fingers at freaky Max who has an interest in all things serial killer related. In order to keep his name in good standing he tries to hunt down the real killer, but what he finds is more than he could possibly prepare for.

The film is widely available now, so if you haven't seen it, then I highly recommend grabbing a copy.


After a break for the annual Flinterrogation, the hardest horror and cult cinema quiz there is, we were introduced to the final film of the festival by the two directors, Jeremy Gillespie, Steven Kostanski (best known for their work as part of the Astron-6 collective (Manborg, Father's Day), and producer Casey Walker.


The Void was the perfect film to end the weekend. 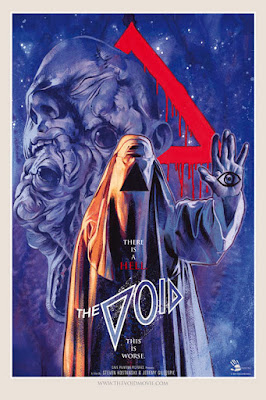 The movie follows police officer Daniel Carter (Aaron Poole) and a group of staff as they defend themselves against a violent cult that threatens an isolated hospital only to find the real horror is already inside.

Poole (The Conspiracy, The Last Will and Testament of Rosalind Leigh) gives a dominant performance, but is still supported by a great cast in this brilliantly directed movie that boasts an absolute showcase of practical FX and bloody gore. Tense and atmospheric from start to finish, the film has the feel of such classics from the 80s like Hellraiser, The Thing, and The Keep. An unintentional homage to such films, as the directors said in the Q&A afterwards that growing up they were more influenced by Japanese horror.

I loved it. It was my favourite film of the festival even though my top three, The Void, The Devil's Candy and I Am Not a Serial Killer are all very different from each other. This film made me feel like a kid again watching horror with wonderment, intrigue and intensity. I'm going to pre-order the DVD/Bluray as soon as humanly possible!

So there we are, another year of Mayhem. But fear not, there's this year to look forward to! This morning they announced this year's festival will be held on Thursday October 12th to Sunday 15th. I'll be there once again. Hopefully you'll be there too.

Mayhem Film Festival was founded in 2005 by filmmakers Steven Sheil and Chris Cooke. They screen the best in contemporary horror, science-ﬁction and cult cinema and television from around the world. Featuring premieres, previews, masterclasses, international special guest ﬁlmmakers, and unique live cinema events, the festival has developed a reputation as one of the strongest and most innovative genre festivals in the country. They are based at Broadway in Nottingham, one of the UK's leading independent cinemas and creative hubs.
Posted by Mad Mike at 21:44

Email ThisBlogThis!Share to TwitterShare to FacebookShare to Pinterest
Labels: 2016, 2017, Astron 6, Creepy, Don't Kill It, I Am Not a Serial Killer, Mayhem Horror Film Festival, Part 4, The Void