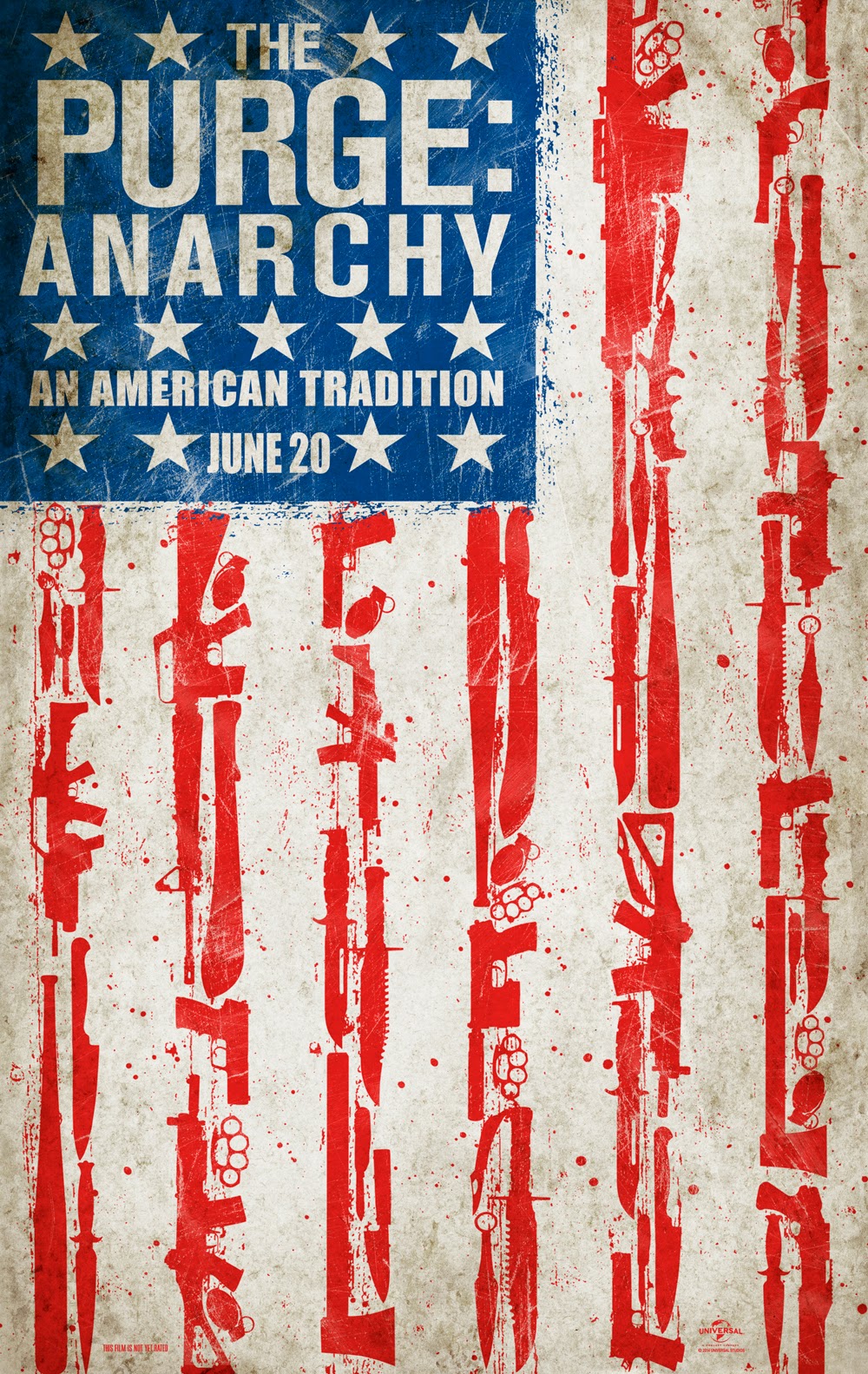 Although I saw The Purge, I didn't actually write a review for it. So after watching The Purge: Anarchy last night, I thought I would touch upon it's predecessor first.

I haven't got many nice things to say about it to be honest as I found it stupid and annoying. The plot was wafer thin and full of holes and it was filled with stupid characters making even more stupid decisions! The characters were so annoying that I actually wanted them all (they deserved it) too die. It was 2013's ATM which was my worse pick of 2012.

Despite the talents of Ethan Hawke and Lena Headey, the film was let down by poor, predictable and clichéd writing and in the outcome it was Rhys Wakefield's performance as the "Polite Leader" that was the most positive thing about the home invasion movie.


In short, I felt it was a dumbed down piece of over predictable entertainment for the masses and I hated it! I would give it 1 STAR!

With the sequel written and directed by James DeMonaco once again, I wasn't expecting much more with this sequel.

This time round the story follows a number of characters and moves out of a house and onto the streets of Los Angeles. Two hours before the start of the annual purge, we're introduced to the main cast, a grieving Sergeant (Frank Grillo) out for revenge, a bickering couple, Shane and Liz (Zach Gilford and Kiele Sanchez) on the verge of separation, a concerned mother and daughter, Eva and Cali (Carmen Ejogo and Zoë Soul) and their dying father/grandfather Papa Rico (John Beasley).

One again, the plot is thin and very simple. This time though there's an added under story with Carmelo (Michael K. Williams) as someone whom is speaking out against the purge and what it really represents. In the meantime, Shane and Liz's car breaks down, Eva and Cali are in world of trouble with Papa Rico going missing and the Sergeant the out for blood. A gang of purgers are after Shane and Liz, Eva and Cali are accosted by tactical purgers and predictably they all come together as one, under the begrudged protection of the Sergent.

I went into this movie with low expectations and from the outset it seemed to follow the same principles as the first film. That being, having annoying characters making stupid decisions and a level of predictability that causes more nuisance than good. About 45 minutes in and I found myself wanting to hate this film, but I just couldn't.

Yes, it has characters that I wanted to die because of their stupidity, but there was only two this time, instead of the whole cast! Frank Grillo was a good leading actor and I have to say, everything else I've seen in him, including this film, he has been solid. His character provides someone to cheer for, and somewhat of an anti-hero. His character starts of cold with one mission in mind, but as the film goes on he becomes a protector and rock for the main cast of characters to rely on, weather he likes it or not.

There is a few twists and turns throughout this sequel, but nothing that causes a big surprise with the underlining sub plot that presents a message that has been an issue since the invention of money. The rich and poor and the divide between the classes. The Purge sequel becomes more about the problems of the annual purge and not just the "cleansing" it's meant to be about. This was slightly broached in the first movie with "the stranger" as played by Edwin Hodge, but failed to make an impact. Hodge does make an appearance towards the end of the flick.

Half way through the movie, and especially towards the end, it felt more like an all out action flick rather than horror. This isn't a bad thing and was the reason why I didn't hate it. Yes, it is predictable, yes, there were times I was thinking "I wish he/she would should the fuck up!" and "Just shoot her/him for fucks sake!" All round, it had better character development and things are not as straight forward as they appear to be in the first flick, and that made The Purge: Anarchy a more entertaining watch as opposed to an insult to intelligence and mindless bashing of the senses.

I did enjoy it and thought it was a hell of a lot better than The Purge and that's why it gets the amount of stars I'm about to give it.


THE LACK OF TENSION IS MADE UP FOR BY THE FUN ACTION SCENES AND PROVED TO BE AN ENTERTAINING FILM THAT DIDN'T PISS ME OFF LIKE IT'S PREDECESSOR!