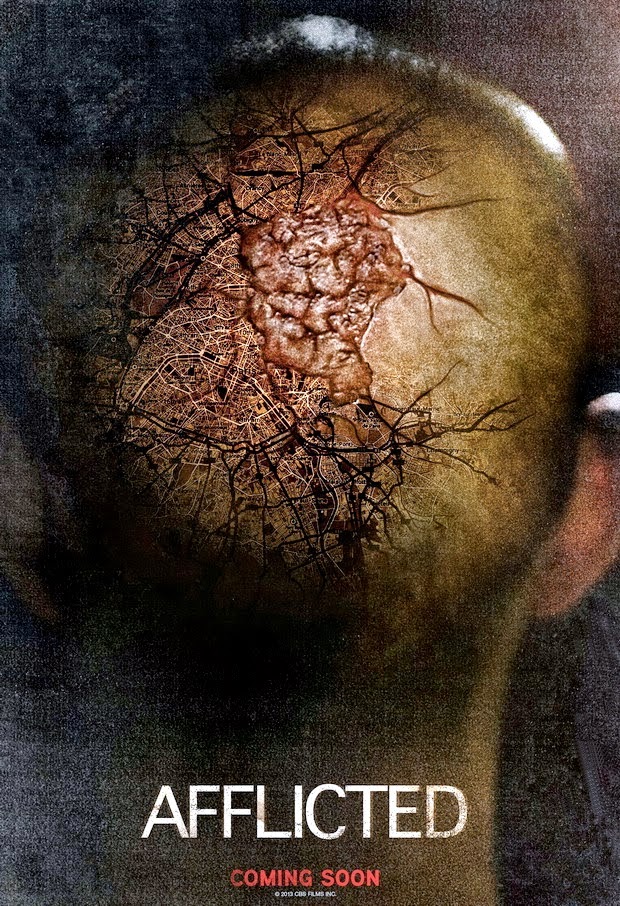 I've not watched many new horror films since my last review (The Quiet Ones) as I've been catching up on some older flicks as well as a few classics. The new movies I have watched haven't been great and therefor, I really couldn't be bothered to write a review! Lazy I know. You can shout at me later.

Anyway, I watched Afflicted tonight and even though I've posted a bit about it on the Maven's Movie Vault of Horror Facebook Page, I pretty much went into it blind. This can go two ways, either it's a good thing or a bad thing, but during most of this film I had a smile on my face.

Afflicted slots nicely into the found footage sub-genre. For those that don't like found footage, this isn't a typical entry. Derek Lee and Cliff Prowse (they use their real names in the film) not only star in the movie, but also co-wrote and co-directed.

Derek has a condition called Arteriovenous Malformation, which, to put in simple terms using his words, is "a tangle of screwed up blood vessels in my brain." This however isn't stopping him live his life. He decides to go on a trip around the world with his best friend Cliff. They are also going to document their adventures via cameras and post their videos to a website as they travel from place to place. Hence, found footage!

The camera quality is good, so there's no issue with an out of focus or fuzzy picture. It's not overly shaky too, which a lot of people dislike. Cliff's gear looks top spec! Their first destination is Barcelona, where a good time is had to kick of their journey. Next comes Paris. This is where the trouble starts!

Derek is on the pull and his luck cashes in with a girl called Audrey (Baya Rehaz) while at a bar where their friends, who are a duo called Alaska, are performing. One thing leads to another and Derek takes Audrey back to his hotel room. The gig is still going on, so Cliff stays to watch. After they're done and all packed up, the three lads head back to the hotel to surprise Derek and Audry, only to find Derek out cold on the bed bleeding with Audry nowhere in site.

Over the next few days, Derek develops some weird behaviour as well as some serious strength. This is when the smile on my face appeared. Of course, going into this blind, I didn't know this was going to turn out to be a vampire flick, although I did predict it before it was suggested. Don't worry, that really wasn't a spoiler. 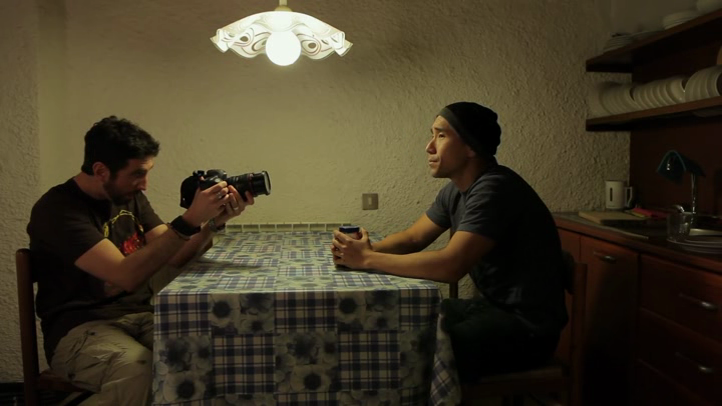 Much like the 2012 movie Chronicle, Cliff and Derek set out to record some tests of strength and speed, all the time getting it on camera. But as these powers evolve, so to does Derek's need for blood. Cliff offers him all the support he needs with this.

There's a quite a few vamp flicks out there that deal with this kind of subject material. You know the kind, when someone is newly turned and they learn how to cope with what's going on. This is a documentary of how Derek, and Cliff deal with the situation. Every event, whether good or bad is recorded on camera. However, it's not all plain sailing!

For a found footage style film, there wasn't any scene where I thought was too shaky. The camera work didn't diminish the quality of the film and the editing was excellent.

Though we're thrown straight into the story, the character development was fast with little detail. Now, this can be a hindrance in most films, but the acting here is so solid, engaging and natural that I felt involved with the characters. I actually think Derek Lee gave a stellar performance in the lead role.

SFX are rarely needed and when they were, they were done with simplicity. I felt this added to the story and kept it more on a realistic level. One particular scene, where Derek puts his hand in the sun is very cool! His skin splits and bubbles with a boiling water sound. I was extremely impressed with that, being as I'm a massive vampire fan. As for actual scares, this more of a psychological piece with some tense scenes.

The plot isn't over complicated. The story has its twists and turns and with a pretty original take on the vamp sub-genre in certain areas, I thoroughly enjoyed this movie from start to finish. It's well written and well directed by both Lee and Prowse. As a massive vampire fan, this film will definitely be going in my collection.